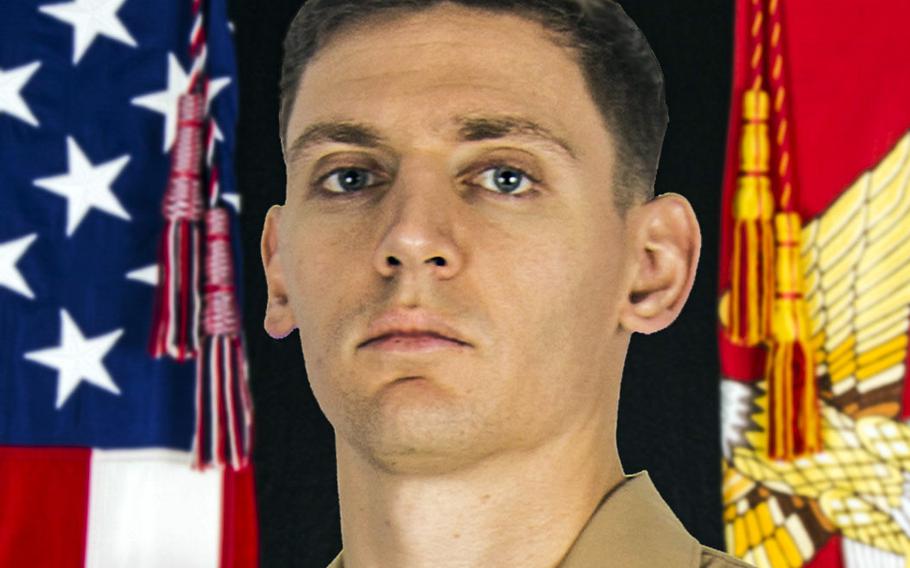 A special operations Marine who died this week from injuries suffered during airborne training at Fort Benning, Ga., days shy of completing jump school, was remembered by his fellow Marines as witty, with “an unconquerable spirit.”

“Our hearts go out to the family and friends of Sgt. Wolf Weninger — an incredibly smart, dedicated, and dependable Marine,” said Col. Travis Homiak, the Marine training center’s commanding officer. “Although he was just beginning his journey as a Marine Raider, his contributions to our legacy did not go unnoticed.”

Born and raised in Auburn, Ohio, Weninger graduated from Kenston High School, MARSOC said. He joined the Marine Corps in May 2015 and was the honor graduate for his training company at Marine boot camp in Parris Island, S.C.

From November 2015 to December 2018, he was an armory custodian with Combat Logistics Battalion 2, 2nd Marine Logistics Group, out of Camp Lejeune, N.C. He reported to MARSOC in January 2019.

“Wolf was exactly what we look for when training students to become Marine Raiders,” said an unnamed member of the course’s training cadre, quoted in the statement. “He was a consistent top performer, a natural leader, he never complained, and was always there to pick up his team during challenging events.”

An avid hockey player, he could often be found on the ice even after a tough week of training, recalled the instructor, who said the Raider community was “proud and honored” to have Weninger join the formation and become a part of their legacy.

He showed “unsurmountable determination, a deep sense of integrity, and an unconquerable spirit,” as well as a good sense of humor even in the most challenging times, said Homiak, the training center commander.

Charismatic, with deadpan delivery of silly one-liners that “melted away when he couldn’t keep a straight face any longer,” the Marine never took himself too seriously, said Nick Guy, a friend and Special Forces soldier with the National Guard. “I envied him for that.”

Nights out at the bar, Weninger “kept swooning girls away” by sharing “unflattering facts about himself,” Guy said in an email. They’d met through mutual pals and hadn’t worked together, but Guy said his friend was passionate about his profession and “embodied all that Semper Fidelis stands for.”

Last year, at least four service members died in parachuting incidents, including a Ranger who died during a routine training jump at an undisclosed location in Arizona in March.

Hundreds of service members attend the three-week Basic Airborne Course in Georgia each year. In the final week, before graduating and earning the silver parachutist badge known as “jump wings,” they must complete five static line parachute jumps from a C-130 or C-17 aircraft at an altitude of over 1,200 feet, the course website states.

On three “Hollywood” jumps, they wear only the main chute and a reserve. On two “combat equipment jumps” — one of them at night — they each carry a rucksack with a modular airborne weapons case and a dummy weapon.

Class 24-20 was slated to graduate Friday, an Army schedule showed. Members completed the first two of their five qualifying jumps Monday, according to a post on the Airborne School’s Facebook page.

“Prior to jumping their combat equipment each student will conduct a rigging exercise with their instructor to show them the proper rigging,” the site states.

An investigation into this week’s incident was underway, MARSOC said. It marks at least the fifth Marine Raider fatality since an April 2019 training accident at Camp Pendleton, Calif.