Group of Democratic lawmakers tour Fort Hood, leave ‘deeply concerned’ about conditions at the Texas base 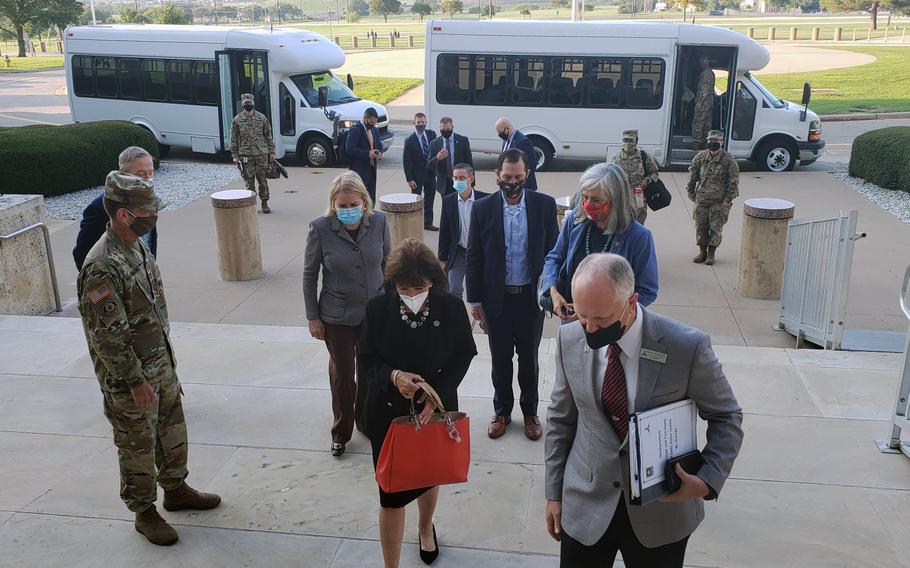 An eight-member congressional delegation on Friday visited Fort Hood, Texas, as part of an inquiry into the Army base. Acting base commander, Maj. Gen. John Richardson, far left, pledged to provide the lawmakers detailed information to give a “full understanding of the challenges Fort Hood is facing.” (U.S. Army)

AUSTIN, Texas — Eight Democratic members of Congress said Friday that they have many lingering concerns about the conditions of Fort Hood after touring the base this week and speaking with the soldiers and families who live there.

“Behind me is the sign that says, ‘Fort Hood, the Great Place.’ I don’t think that any of us feel that we can call it a great place right now,” said Rep. Jackie Speier, D-Calif. “I believe there are serious cultural and safety issues at this base that we must address.”

Speier, who serves as the chairwoman of the military personnel subpanel of the House Armed Services Committee, said the lawmakers visited the base because of the killing of Spc. Vanessa Guillen, the suicide of Sgt. Elder Fernandes and suspected homicide of Pvt. Gregory Wedel-Morales. However, they said they also witnessed poor living conditions of soldiers in barracks and families in base housing, as well as a culture of fear and low morale.

“We came here today to get answers, but I feel like we not only don’t have these answers, but now we have more questions,” said Rep. Gil Cisneros, D-Calif.

The lawmakers spoke about their visit Friday outside the main entrance to Fort Hood, and often mentioned by name some of the 28 soldiers who died at the base this year. The manner of those deaths, including eight soldiers killed in accidents, six suicides, five homicides and two illness-related deaths, drove the lawmakers to further investigate the central Texas base themselves.

Rep. Jason Crow, D-Colo., served as an Army Ranger and he said the barracks are some of the worst that he’s seen. He said he photographed wasp nests in the stairwells, sagging blinds in nearly every room that had them and a basement classroom that had chairs missing legs.

“In the military, the small things are big,” he said. “The command has a big job in front of it. They’ve got to get in front of units and fix this stuff quickly.”

But Crow added comments from the new Fort Hood acting commander, Maj. Gen. John Richardson, were encouraging. The commander acknowledged the problem and described his plan to meet with leaders and soldiers across the base to rebuild the trust that has eroded this year.

“Whether or not they can fulfill that promise of course will be seen in the months and years ahead,” Crow said. “Military-wide, there’s a challenge as we focus the transition of our force as we drawdown in Iraq and Afghanistan and change the focus of the military. We have an entire generation of mid-level and junior leaders who spent the last two decades at war. Learning how to lead in a garrison environment is different than leading on the battlefield, in many respects. So we have to work with the [Defense] department and work with leaders to help them train those young leaders to lead in a garrison environment and set the right tone.”

Richardson responded to the lawmakers’ visit with a prepared statement.

“The past several months have been difficult and challenging at Fort Hood,” he said. "We will work collectively with our communities, Fort Hood units, U.S. Army Forces Command, the Department of the Army and our elected officials to address these complex and challenging issues.”

Fort Hood first drew the attention of Congress following the death of Guillen on April 22. A fellow soldier bludgeoned her to death with a hammer in an arms room at Fort Hood and then buried her body off base. The lawmakers said they were able to visit Guillen’s former barracks room as well as the location where she died.

“To retrace her steps to her death was a chilling walk that I won’t forget,” said Rep. Katherine Clark, D-Mass. “But it has deepened all of our commitment to treat these patriots with the care that they deserve. To end their fear of reporting sexual assault and harassment. To increase the acknowledgement and accountability for crimes and suicides on this post.”

Each of the lawmakers visiting Fort Hood are also cosponsors of a bill introduced by Speier and Rep. Markwayne Mullin, R-Okla. The I Am Vanessa Guillen Act would revamp the military’s system for reporting and investigating military sexual harassment and assault, as well as address a number of the concerns raised through the deaths of soldiers at Fort Hood this year. It now has 125 cosponsors, about 10 whom are Republicans, Speier said.

Speier’s subpanel, along with the House Committee on Oversight and Reform’s subpanel on national security, also have an ongoing investigation into the policies and practices of Fort Hood.

Though no Republicans joined the delegation for the visit to Fort Hood this week, Rep. Sylvia Garcia, D-Texas, said she does not believe that partisan politics will hinder the bill or efforts to reform Fort Hood.

“When it comes to protecting our soldiers, it’s a no-brainer for most people,” she said. “Across the board, soldiers or veterans get bipartisan support on almost all the bills that we file.”