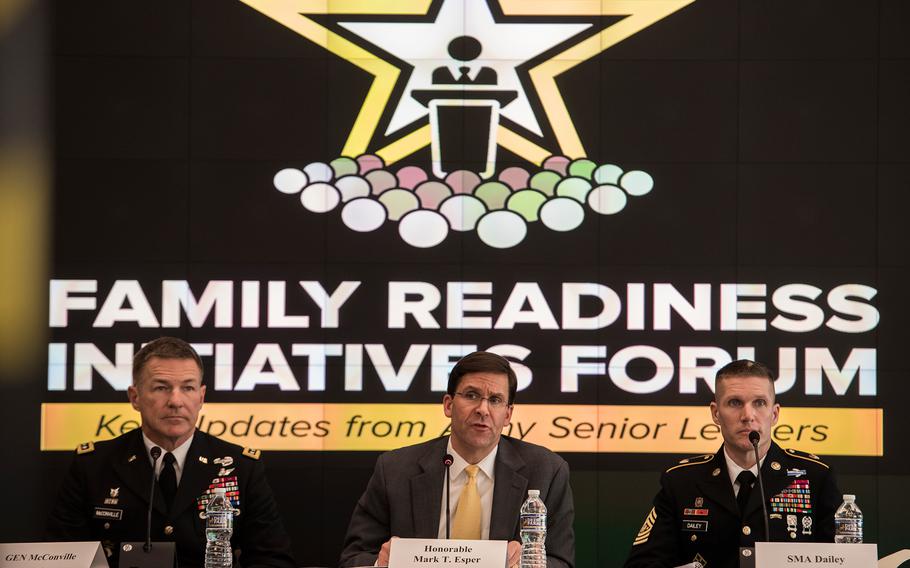 ARLINGTON, Va. — The Army wants to stabilize family life for soldiers by moving them less often and improving access to jobs for their working spouses, the service’s top civilian said Tuesday.

Army Secretary Mark Esper told a crowd of soldiers and their family members that he was crafting a variety of new policies that he believes would bolster families, at least in part to improve the attractiveness of remaining in the service for a long time.

Those proposed initiatives include lengthening soldiers’ home station tours at most installations outside the United States, quickening the pace for hiring spouses to Army civilian jobs and reimbursing spouses for fees incurred to update professional licenses in new locations.

Esper said those policies would address some of the concerns soldiers and family members have raised during his visits to installations across the globe through his first 15 months in office.

“We’re turning common themes into actions [and] ideas into directives to really help improve the welfare of our soldiers and our families,” he said during a family forum hosted by the Association of the United States Army at its headquarters in Arlington, Va.

About 53 percent of soldiers are married and 43 percent have children, according to the Army.

In order to retain soldiers, the service must take care of those family members, Esper said. It’s an issue the Army and the other military services have long struggled with — especially with spousal employment.

“Choosing the life of a military spouse has, in turn, generally meant that the spouse must give up career aspirations of their own in lieu of their servicemember’s,” the report stated.

Esper said some of his initiatives should help curb those problems.

He proposed standardizing the typical amount of time that soldiers spend in their assignments across the United States and elsewhere to 36 months. Tours outside the continental United States are typically about 24 months.

More so, Esper wants soldiers to understand they do not necessarily have to move locations to be promoted or improve their careers. At least in part, he wants to stabilize families by encouraging soldiers to seek new assignments at their current locations, if they are pleased with their home life.

“So, it’s OK to stay in one place for an extended period of time … as long as you are performing your role and it is value added to the Army,” Esper said. “Particularly if a spouse has a great job, doubly so if the kids are in great schools and are happy — we want as much as possible to reduce [permanent change of station] turmoil.”

For soldiers who must move, Esper said he is working to improve hiring practices for jobs on Army installations and to streamline the process for spouses in careers such as accounting, law, medicine and teaching who must recertify their credentials in their new location.

He said he is working to install a new policy that would reimburse Army spouses for the fees they pay for their credentials in their new location. Esper also said he is pressuring Congress to adopt new legislation to simplify and standardize that credentialing process.

Another barrier to spousal employment, Esper said, is the Army’s lengthy hiring process. It takes the Army more than 120 days on average to hire for on-post civilian jobs. Esper said he aims in the next two years to reduce that process to 60 days at the most, which would increase the attractiveness of installation jobs, often filled by Army spouses.

“We have to do a better job at spousal hiring and civilian hiring for those jobs locating on installations we provide,” he said. “There’s no reason why someone should have to wait 100-plus days to get a job. Nobody is going to wait … or another opportunity is going to come or it's time to [move] again.”