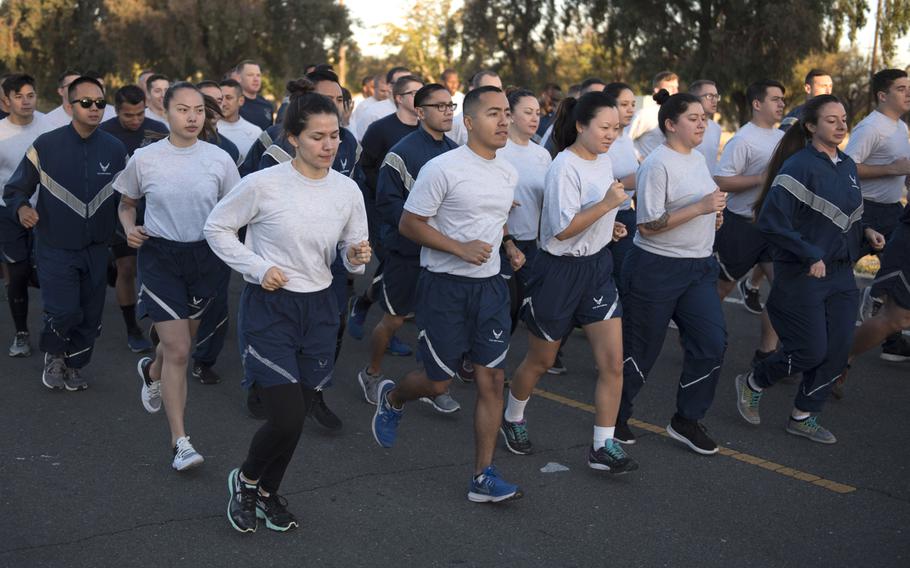 KAISERSLAUTERN, Germany — The Air Force is exploring a fitness assessment that would plug a value for an airman’s 1.5-mile run time into an equation that would include waist and height measurements.

The result: A fitness-fatness index that could be gender neutral.

Last month, Neal Baumgartner, chief of the Air Force Exercise Science Unit, briefed the Defense Advisory Committee on Women in the Service about the idea, which would measure airmen’s aerobic fitness against their body composition.

Nothing, however, is official, and the concept is still in the research stage, Baumgartner said in a follow-up interview with Stars and Stripes.

“We care most about consistent, positive fitness behavior, consistent physical activity,” he said. “That’s what we’re driving towards. The test is very important, but training is more important.”

Breaking down the potential new formula, Baumgartner said an airman’s run time would yield a number representing VO2 max, or maximal oxygen uptake. That figure would be divided by his or her waist-to-height ratio for a total fitness score.

“When I put all those together in the equation – now I’m looking at maybe gender neutrality,” he said.

The Army plans to adopt a new gender- and age-neutral fitness test for all soldiers by October 2020. The Army Combat Fitness Test has six components: standing power throw; strength deadlift; leg tuck; two-mile run; sprint-drag-carry event; and hand-release pushups. Certain occupational specialties in the Army, such as infantrymen or cannon crew members, may be required to achieve higher test scores or higher standards, officials have said.

The Air Force in June will roll out its first career-specific, Tier 2 fitness standards for air liaison officers and tactical air controllers.

A team from Baumgartner’s unit will be at Ramstein next month to train explosive ordnance disposal non-commissioned officers from Air Force bases across Europe in the new EOD fitness assessment in the works. Tier 2 fitness standards are gender neutral, Baumgartner said.

Most airmen, however, fall under Tier 1 fitness standards, where health is the ultimate goal.

The current test — introduced in 2004 — is adequate, Baumgartner said. It scores airmen according to gender and age on the 1.5-mile run, timed pushups and sit-ups, and waist measurement.

The concept being studied takes “the latest and best science to address the ... inextricable relationship between aerobic fitness and the location of fat in the body,” Baumgartner said.

The most “dangerous” fat in the body is visceral fat, located in the trunk region; it’s associated with various disease states that progress more rapidly the more abdominal fat one has, he said.

“I could have an airman who has 24% body fat and another airman of very similar age ... with 20% body fat,” Baumgartner said. If the airman with less overall body fat, however, carries more fat in the gut, “he’s at a higher health risk.”

Of nearly 2 million fitness tests analyzed from across the service, not one airman has failed the waist measurement while maxing out the run time, Baumgartner said.

“It’s a unicorn, it’s a make-believe thought,” he said. “You hear people say I can carry a 40-inch abdominal circumference for males or maybe a 36-inch for females and run like the wind — the truth is they can’t.”

Airmen don’t have to be superb athletes to do well on an assessment measuring aerobic fitness against body composition.

“I can tell you that just getting off the couch, just getting out from behind your desk and doing something on a routine basis” is enough, he said. “We’re not asking for fast running times ... just get out and move and you’re going to be able to meet the minimum requirement.”