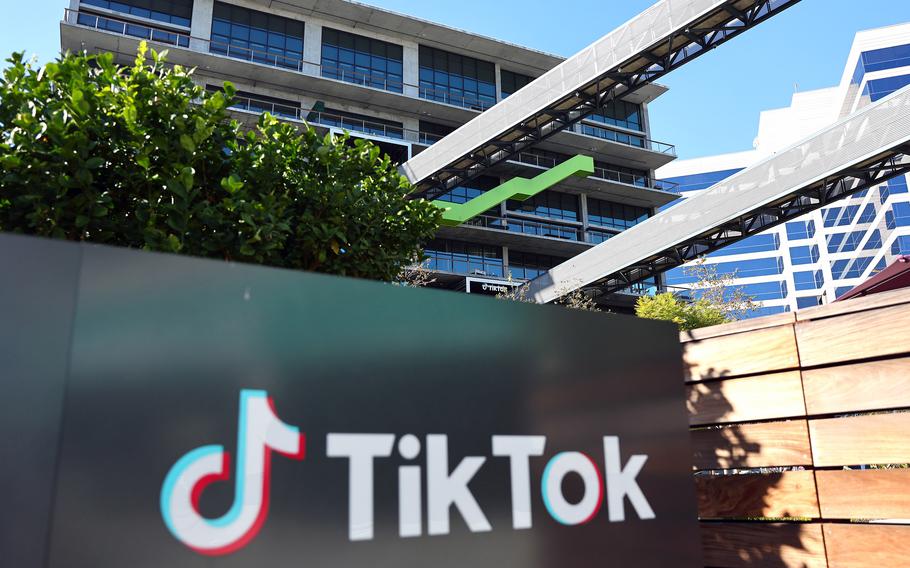 The TikTok logo is displayed outside a TikTok office on Dec. 20, 2022, in Culver City, California. (Mario Tama/Getty Images/TNS)

(Tribune News Service) — The growing clamor in Congress to completely ban the popular social media platform TikTok in the U.S. raises the stakes for the Biden administration, which is in the late stages of reviewing the security risks of the app.

Meanwhile, Representatives Mike Gallagher, a Wisconsin Republican who now wields clout over how to counter Chinese influence in the U.S., and Raja Krishnamoorthi, an Illinois Democrat from Illinois, said they plan to team up with Senator Marco Rubio, a Florida Republican, for a similar measure.

TikTok “opens the door for the Chinese Communist Party to access Americans’ personal information, keystrokes, and location through aggressive data harvesting,” Hawley said in a statement.

The attention on TikTok underscores concerns in Congress that TikTok and its parent, ByteDance Ltd., could share information on U.S. users with Chinese authorities. It’s also part of a broader bipartisan focus on ways the U.S. can counter China’s rising economic and strategic influence.

Congress late last year banned TikTok from government phones, and more than half of U.S. states have enacted similar prohibitions. Still, it’s not yet clear how far the proposals for a nationwide ban on TikTok will go. Some Democratic lawmakers so far have held back from calling for an all-out ban while awaiting a signal from the Biden administration, which is addressing the topic through the Committee on Foreign Investment in the United States.

The committee is trying to conclude its review of the national security implications of the app, and the company is in discussions with officials on a deal that would address some security concerns by attempting to prevent U.S. data from being accessed by programmers or other individuals in China.

“From a congressional standpoint, Republicans would do it in a heartbeat,” said Klon Kitchen, a China expert with the American Enterprise Institute. “Democrats are deferring to the White House,” which has not given much direction, Kitchen said.

A spokesperson for the White House National Security Council had no comment on the legislative proposals, but said the administration is focused on the potential security risks posed by the ways China and other countries use digital technology and data from Americans, as well as looking into steps it could take under presidential powers.

Brooke Oberwetter, a spokesperson for TikTok, said a ban on the app would be a “piecemeal” approach to broader issues such as data security, privacy and potential harmful online influences.

“We hope that lawmakers will focus their energies on efforts to address those issues holistically, rather than pretending that banning a single service would solve any of the problems lawmakers are concerned about or make Americans any safer,” Oberwetter said in an email.

Still, some politicians are stepping up their attacks. Gallagher, on NBC’s “Meet the Press” earlier this month, called TikTok “digital fentanyl” owned by the Chinese Communist Party.

Gallagher was recently named as chair of the newly formed Select Committee on the Strategic Competition between the United States and the Chinese Communist Party, giving him a bigger platform to propose ways to counter Chinese influence. But the ultimate jurisdiction over the legislation rests with the House Foreign Affairs Committee.

The committee hasn’t yet committed to taking up the proposed legislation from Gallagher and Krishnamoorthi once they introduce it. A person familiar with the committee’s plans, who asked not to be identified to discuss private deliberations, said the panel is planning to work on legislation that is broader than just TikTok by looking at concerns around China and technology.

House Speaker Kevin McCarthy and Senate Majority Leader Chuck Schumer didn’t immediately respond to requests for comment about whether they would bring up a TikTok ban for a vote. Schumer was one of the first senators to warn that TikTok could threaten national security in 2019, but he previously called for TikTok to be sold to an American company rather than banned altogether.

Another potential hurdle to the legislation is the prospect of a legal challenge. Multiple courts halted then-President Donald Trump’s attempts to ban TikTok in 2020. Two federal judges issued injunctions against that ban, arguing it exceeded the executive branch’s authority and potentially violated the First Amendment.