Pompeo dismisses Khashoggi as ‘activist’ whose murder was overblown by media 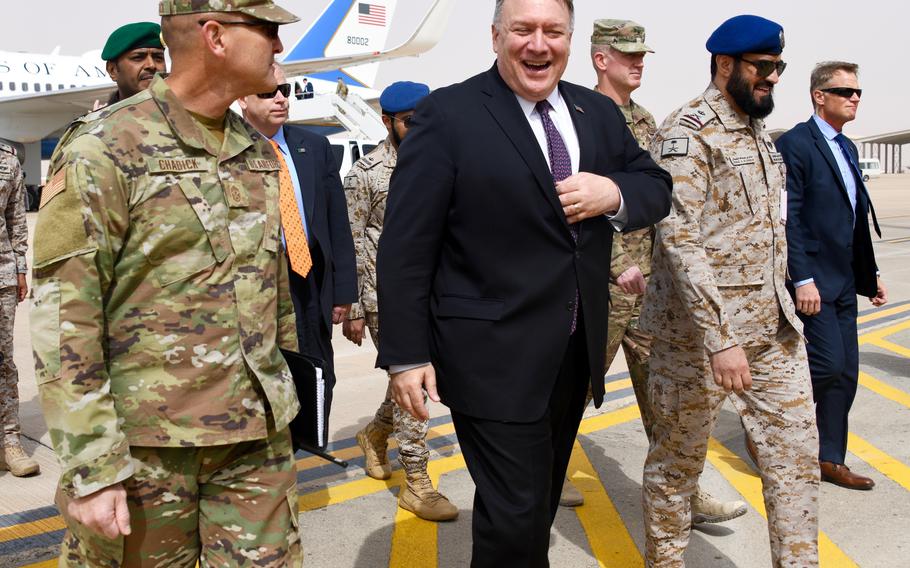 In a new book, former secretary of state Mike Pompeo derides the idea that Jamal Khashoggi, a Washington Post contributing columnist who was brutally murdered in 2018, was a journalist. Pompeo sympathizes instead with Mohammed bin Salman, the crown prince of Saudi Arabia who was found to have ordered Khashoggi’s assassination, and defends at length the United States’ relationship with Saudi Arabia.

In “Never Give an Inch: Fighting for the America I Love,” published Tuesday, Pompeo said Khashoggi did not deserve to die and called his killing “outrageous, unacceptable, horrific.” However, he then goes on for several more pages mocking the “disproportionate global uproar” over Khashoggi’s death, arguing that Khashoggi was an “activist,” not a journalist, whose death was “hammered” out of proportion by an overly sympathetic media.

“Just as the media spent years trying to drive a wedge between me and President Trump, they spent the ensuing weeks trying to fracture America’s relationship with Saudi Arabia,” Pompeo wrote. “The progressive Left hates MBS, in spite of the fact that he is leading the greatest cultural reform in the kingdom’s history. He will prove to be one of the most important leaders of his time, a truly historic figure on the world stage.”

Khashoggi was killed Oct. 2, 2018, after visiting Saudi Arabia’s consulate in Istanbul to obtain documents that would allow him to marry his fiancee, Hatice Cengiz. Saudi agents dismembered Khashoggi’s body inside the consulate, and his remains have never been found.

In the months that preceded that visit, Khashoggi had been writing columns for The Washington Post that were sharply critical of the crown prince, who effectively rules Saudi Arabia and has carried out a harsh crackdown on rivals and dissidents.

Pompeo, who is reportedly exploring a 2024 presidential run, also pushed the claim in his book that Khashoggi was “cozy with the terrorist-supporting Muslim Brotherhood,” a charge that both Khashoggi’s family - and Khashoggi himself, when he was alive - denied repeatedly.

“Jamal Khashoggi was not a dangerous person in any way possible. To claim otherwise would be ridiculous,” Khashoggi’s family told The Post in 2018.

The CIA concluded in 2018 that Mohammed had ordered Khashoggi’s killing, contradicting Saudi Arabia’s insistence that the crown prince had no advance knowledge of the plot. However, in his book, Pompeo - who previously served as CIA director - seems to give Mohammed the benefit of the doubt over the United States’ own intelligence agencies.

“First, contrary to what has been reported, there is nearly zero intelligence that directly links MBS to ordering the murder,” Pompeo wrote. “Second, I met with many people who had ordered killings. Were it to be proven that MBS had ordered this one, it would have meant only that he was one more ruthless leader in a pretty damn ruthless part of the world.”

In a statement Tuesday, Fred Ryan, publisher and CEO of The Washington Post, said it was “shocking and disappointing” to see Pompeo’s book “so outrageously misrepresent” Khashoggi’s life and work.

“His only offense was exposing corruption and oppression among those in power - work that good journalists around the world do every day,” Ryan wrote. “Jamal dedicated himself to the values of free speech and a free press and held himself to the highest professional standards. For this devotion, he paid the ultimate price.”

“It is shameful that Pompeo would spread vile falsehoods to dishonor a courageous man’s life and service - and his commitment to principles Americans hold dear - as a ploy to sell books,” Ryan added.

In November, the Biden administration determined that Mohammed, as a “sitting head of government,” was immune from a civil lawsuit filed in the United States by Khashoggi’s fiancee and a human rights organization he founded.

In a letter accompanying the submission, State Department acting legal adviser Richard C. Visek said the decision was a legal one and that the department “takes no view on the merits of the present suit and reiterates its unequivocal condemnation of the heinous murder of Jamal Khashoggi.”