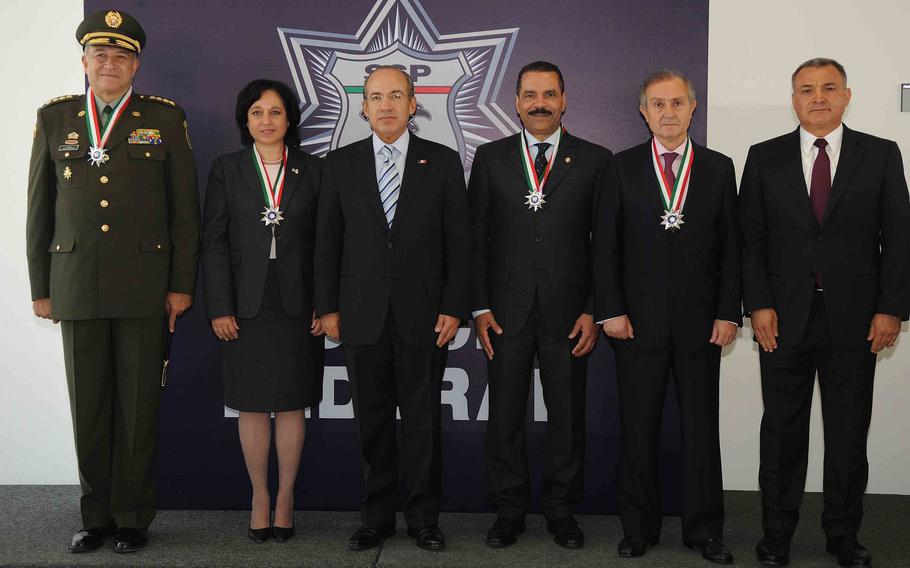 Genaro Garcia Luna, right, is pictured on June 2, 2012. Luna, Mexico’s former top law enforcement official, made millions moonlighting as an enabler for the Sinaloa Cartel even as he stood as a symbol of his country’s struggling war on the narcotics trafficking trade, prosecutors said at the start of his trial. (Wikimedia Commons)

NEW YORK — Mexico’s former top law enforcement official Genaro Garcia Luna made millions moonlighting as an enabler for the Sinaloa Cartel even as he stood as a symbol of his country’s struggling war on the narcotics trafficking trade, prosecutors said at the start of his trial.

Assistant U.S. Attorney Philip Pilmar said in his opening arguments to a jury Monday that under Garcia Luna’s watch, the cartel he collaborated with sent “literal tons” of cocaine to the United States, as “federal police acted as armed mercenaries to take out the enemies the cartel wanted removed.”

“The defendant took their money and betrayed his oath to their country,” Pilmar argued at the start of what is slated to be an eight-week trial in U.S. District Court in Brooklyn, where former Sinaloa cartel boss Joaquin “El Chapo” Guzman was previously tried and convicted.

“The evidence is based on speculation and the words of some of the biggest criminals in the world,” he added, telling the panel that the witnesses for the prosecution are guilty of heinous crimes and have “overwhelming motives to lie” about Garcia Luna taking bribes to help their own cases.

De Castro added that the witnesses are also looking for revenge because the cartel did not get the protection it paid for under what was a genuine crime-fighting mission in Mexico with Garcia Luna as a leader. The attorney showed photos of Garcia Luna with top U.S. officials, including former president Barack Obama, former attorney general Eric Holder and members of Congress, to depict how integral he was to a joint U.S.-Mexico narcotics trafficking effort.

Garcia Luna, who was tasked with taking down the drug trafficking organization, is accused of taking in tens of millions in cartel bribe money that enabled the Sinaloa cartel to operate freely.

Garcia Luna was taken into custody in Dallas in December 2019, marking another narcotics trade prosecution in the U.S. District Court for the Eastern District of New York connected to “El Chapo,” who was known for his ability to escape law enforcement custody. Guzman was sentenced to life in prison plus 30 years in July 2019 for running a massive drug trafficking network that had an extensive network of public officials on its payroll.