WASHINGTON — House Minority Leader Hakeem Jeffries (D-N.Y.) has formally recommended that Reps. Adam B. Schiff and Eric Swalwell be reappointed to the House Intelligence Committee, escalating a clash with House Speaker Kevin McCarthy (R-Calif.), who has vowed to deny spots on the panel to both California Democrats.

In a letter dated Saturday, Jeffries argued that McCarthy has no justifiable reason not to accept his appointments of Schiff, who served as chairman of the Intelligence panel until Republicans took control of the chamber, and Swalwell.

"It is my understanding that you intend to break with the longstanding House tradition of deference to the minority party Intelligence Committee recommendations and deny seats to Ranking Member Schiff and Representative Swalwell," Jeffries wrote in the letter obtained by The Washington Post. "The denial of seats to duly elected Members of the House Democratic Caucus runs counter to the serious and sober mission of the Intelligence Committee."

Republicans have been angling to deny spots on key panels to Democrats partly in retaliation for votes by the Democratic-led House in the last Congress to remove Reps. Marjorie Taylor Greene (R-Ga.) and Paul A. Gosar (R-Ariz.) from committees. Some Republicans joined Democrats in voting to strip Greene and Gosar of their committee assignments.

McCarthy has argued that Schiff and Swalwell are unfit to serve on the Intelligence Committee, pointing to Schiff's conduct as chairman of the panel during the first impeachment investigation of President Donald Trump and Swalwell's alleged ties to a Chinese intelligence operative — an episode that has produced no evidence of wrongdoing on Swalwell's part.

Unlike most committees, where party leaders control their appointees, the speaker has final say over who sits on the Intelligence panel.

McCarthy's office had no immediate response.

In his letter, Jeffries argues that the issues that prompted the votes to remove Greene and Gosar are quite different from those motivating McCarthy's potential denial of seats to Schiff and Swalwell.

Greene and Gosar were removed "after a bipartisan vote of the House found them unfit to serve on standing committees for directly inciting violence against their colleagues," Jeffries wrote. "It does not serve as precedent or justification for the removal of Representatives Schiff and Swalwell, given that they have never exhibited violent thoughts or behavior."

Jeffries also accused McCarthy of a "double-standard" for allowing Rep. George Santos (R-N.Y.) — whom he called a "serial fraudster" — to be seated on committees. Santos has acknowledged lying about key parts of his background and is facing multiple investigations.

Among other things, McCarthy has claimed that Schiff "lied to the American public" about whether he knew the whistleblower who triggered the impeachment investigation into whether Trump pressured Ukrainian President Volodymyr Zelensky to launch an investigation of Joe Biden in exchange for a promised White House meeting and delivery of U.S. military aid.

As noted in a Washington Post fact check this month, Schiff, during the impeachment probe, sought to avoid having the whistleblower's name revealed publicly, often cutting off questions that might expose the official. Eventually, right-wing media published the name of an intelligence officer, although that individual has never been officially confirmed as the whistleblower.

In seeking to deny Swalwell a seat, McCarthy has seized on a 2020 report by Axios that a suspected Chinese intelligence operative called Christine Fang had developed extensive ties with local and national politicians, including Swalwell.

She reportedly targeted up-and-coming San Francisco Bay Area politicians through campaign fundraising and networking. She first met Swalwell when he was a council member in Dublin, Calif., according to Axios.

But there has been no evidence of impropriety on Swalwell's part, a Washington Post fact check this month found. Axios said that when the FBI alerted Swalwell and other House members to its concerns about Fang's activities, Swalwell immediately cut ties with her. 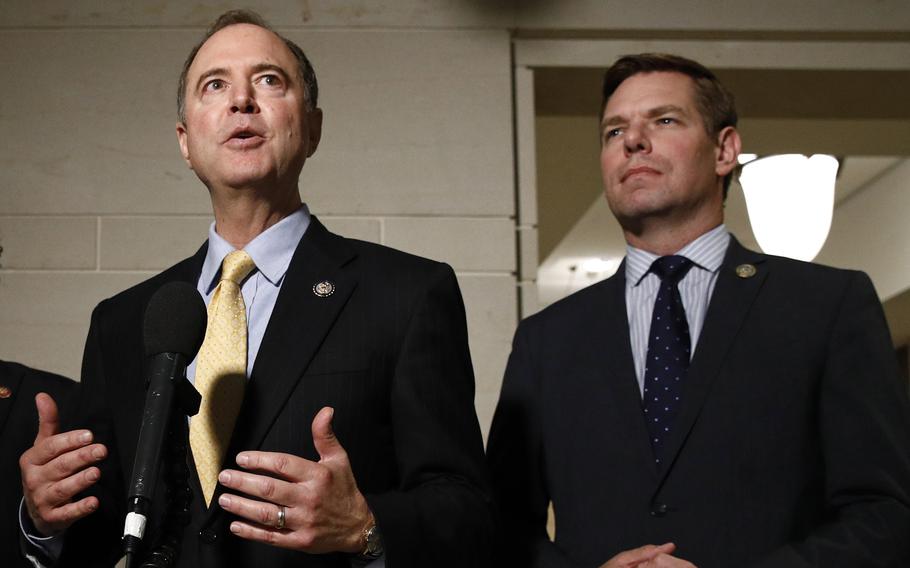 In this May 28, 2019, file photo, Rep. Adam Schiff, D-Calif., left, and Rep. Eric Swalwell, D-Calif., speak with members of the media on Capitol Hill in Washington. (Patrick Semansky/AP)