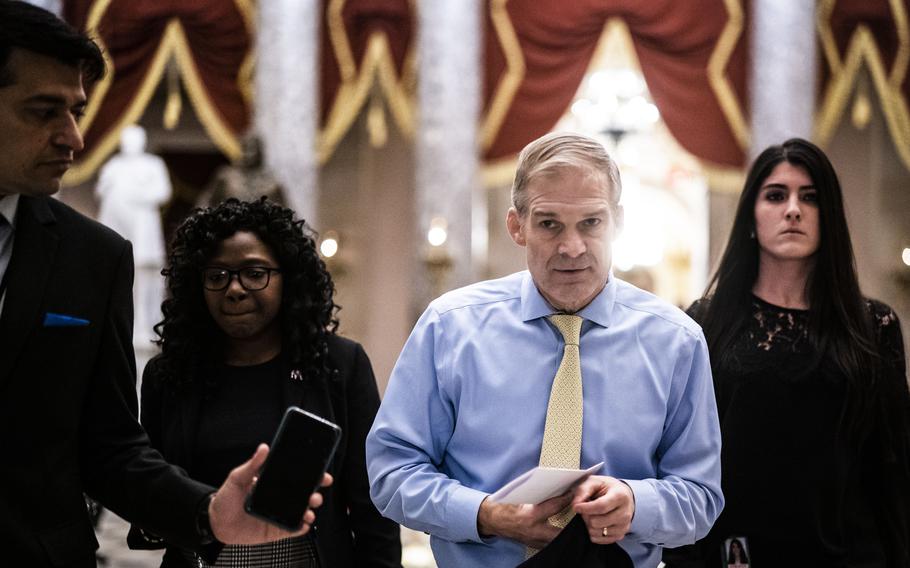 Rep. Jim Jordan (R-Ohio) walks off the floor after a vote on Capitol Hill on Jan. 10, 2023. (Jabin Botsford/The Washington Post)

The Justice Department on Friday responded to the Republican-led House Judiciary committee’s sweeping inquiry into the agency, marking the department’s first correspondence with Rep. Jim Jordan (R-Ohio) in his new role as chair of the panel.

The letter, sent by Carlos Uriarte, assistant attorney general for the Office of Legislative Affairs, attempts to strike a cooperative posture in response to Jordan’s Jan. 17 request covering a range of topics. But the initial correspondence marks the first back and forth in what has historically devolved into a fraught tête-à-tête between Congress and the Justice Department.

Jordan and other House GOP leaders in the new Republican majority have pledged an expansive list of probes into the Biden administration that shift some of the party’s political grievances into investigative priorities.

Jordan’s requests to the Justice Department include an ask for documents and information related to the court-authorized search of Mar-a-Lago, which was executed as a part of the ongoing probe into former president Donald Trump’s mishandling of classified information.

Uriarte’s letter, obtained by The Washington Post, says the Justice Department has commenced the process of responding to Jordan’s requests and lays out an approach that is largely consistent with the policy of previous administrations, writing that the department looks forward to a “productive relationship in the 118th Congress.”

“We look forward to beginning this process in response to your January 17 letters,” Uriarte writes. “We believe that good-faith negotiations will enable us to meet the Committee’s needs while protecting the Department’s institutional interests.”

But he reiterates the department’s long-standing practice of not providing information about ongoing investigations, setting the stage for a broader fight over congressional oversight authority.

Jordan has also asked for specific names and titles of FBI, U.S. attorney’s office and National Security Division employees involved in carrying out Attorney General Merrick Garland and FBI Director Christopher A. Wray’s directives that instructed the FBI to coordinate with local leaders to address threats against school officials.

In his letter, Uriarte specifies that the Justice Department “refrains from making line agents and line attorneys available for congressional testimony or interviews” with the committee, in line with the department’s long-standing policy to protect the privacy and safety of individuals who are working on investigations.

In the past, unsatisfied demands for Justice Department documents have resulted in the House holding senior administration officials in contempt for defying congressional subpoenas — a largely symbolic vote.

Jordan’s office did not immediately respond to a request for comment.