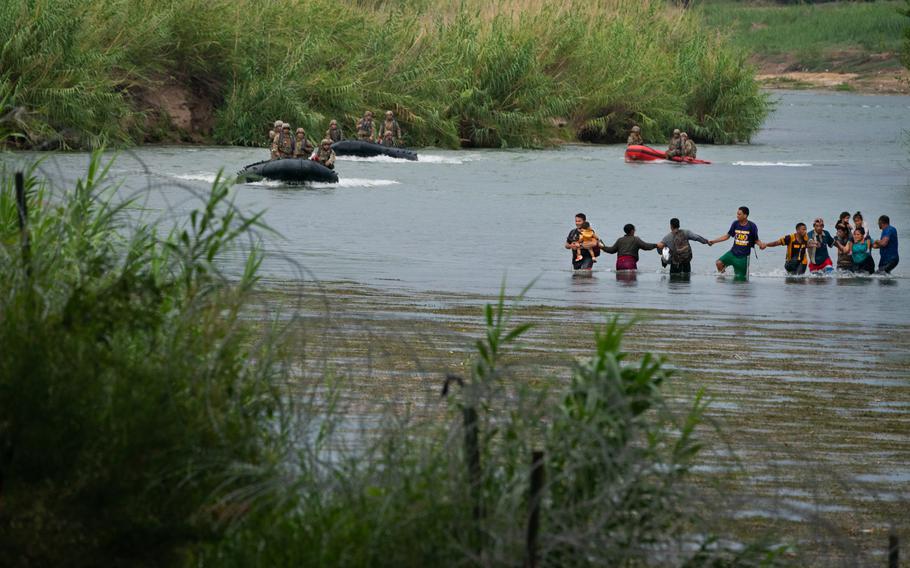 Migrants, including families with small children, join hands to fight the current as they wade across the Rio Grande near the Eagle Pass-Piedras Negras International Bridge on August 12, 2022 in Eagle Pass, Texas. Texas National Guard look on as people make their way across. They will turn themselves into Border Patrol and be transported to a nearby government processing center. (Sarah L. Voisin/The Washington Post)

The Biden administration has greenlit an expanded use of a 1950s-era program to allow tens of thousands of migrants temporary residency in the United States for humanitarian or other urgent reasons, deepening its use of executive authority to shape border policy.

The newer approach to the program, known as parole, offers entry to migrants from specific countries under special conditions, such as applying online. The U.S. will accept up to 30,000 migrants a month from Haiti, Cuba, Nicaragua and Venezuela, while also tightening border enforcement.

While previous administrations have used parole to deal with emergencies or humanitarian challenges, Biden has made more frequent use of the authority than any other president. A previous use of the program, launched in October and limited to Venezuelans, had a one-time cap of 24,000.

Biden officials say they are taking an innovative approach and using the legal tools available to manage a dysfunctional system cracking from decades of congressional inaction on immigration reform.

Administration officials say expanded use of parole is paired with a tougher enforcement approach at the border that threatens to send more migrants back to Mexico if they eschew the new legal pathways and cross into the United States illegally. U.S. border authorities will broaden their use of the pandemic-era Title 42 public health law to carry out quick-returns to Mexico, they said.

Critics of Biden’s latest plan say parole is meant for exceptional circumstances, and not to create a parallel immigration track for hundreds of thousands of new arrivals.

Sen. Chuck Grassley (R-Iowa) filed a bill in December to curtail the broader use of parole, saying it should be for individual emergencies. The state of Florida filed a federal lawsuit in 2021 seeking to block the administration from using the system on the southern border.

“It’s clearly a short-term solution to make an unmanaged crisis look more managed,” he said in an interview.

Under the latest rules, an applicant must have a U.S. sponsor and submit information through an online app, CBP One (cbp.gov). If accepted, participants in the parole system can travel to the United States by air with permission to live and work in the country for two years, and the possibility of staying longer by renewing their status.

Federal immigration law authorizes the Department of Homeland Security to admit migrants temporarily via parole for humanitarian reasons or for a significant public benefit. Officials must consider applicants on a case-by-case basis and subject them to background and security checks.

New beneficiaries of the program will join a growing international array of newcomers whose provisional U.S. residency will remain largely subject to the whims of the executive branch. The Biden administration has used parole to admit nearly 80,000 Afghans who escaped the Taliban takeover, and more than 100,000 Ukrainians who have fled the Russian invasion of their homeland, among others.

“They are trying to accomplish something to change the status quo, and I thank them for that, but this is not consistent with any previous use of parole,” said Sen. James Lankford (R-Okla.).

In recent months, record numbers of migrants have been crossing the United States’ southern border from Cuba, Nicaragua and Venezuela, countries whose strained diplomatic relations with Washington make it nearly impossible for the United States to arrange deportation flights.

Mexican authorities agreed to accept far more migrants returning from the United States who originally came from Cuba, Nicaragua, Venezuela and Haiti — up to 30,000 total per month — and U.S. officials say the government of President Andrés Manuel López Obrador would not have agreed to facilitate the crackdown unless the United States opened more legal channels for migrants to stay.

One senior administration official, speaking on the condition of anonymity to discuss the negotiations, said Mexico’s consent to the returns was “an independent decision premised on our willingness to take these individuals.”

The Mexican government has broader latitude to deport migrants to Cuba, Venezuela and Nicaragua, but López Obrador has indicated they will be allowed to seek jobs or asylum protections in Mexico.

In Ciudad Juárez, Mexico, where mass crossings into El Paso overwhelmed U.S. border agents and humanitarian shelters in early December, migrants have been looking for sponsors and trying to figure out how to apply for parole, said Marysol Castro, an attorney with Diocesan Migrant and Refugee Services.

“Parole is a golden ticket,” she said. “Parole is their temporary permission to be in the United States and have their asylum claim adjudicated.”

Castro, who provides legal aid to asylum seekers, said the government’s requirement that applicants find a U.S. sponsor with legal status and use the CBP One online app will potentially hurt those who most desperately need assistance.

“If you’re poor and persecuted and don’t know anyone in the U.S., you’re screwed,” she said. “I have clients who were jailed in Cameroon for months and sexually abused, then escaped. They don’t have time for CBP One to respond to them.”

Parole has its roots in the aftermath of World War II, when officials included parole in the Immigration and Nationality Act of 1952, in part to manage refugees. President Dwight D. Eisenhower was the first to use parole to admit 15,000 Hungarian refugees who fled the 1956 revolution, according to the Congressional Research Service.

Congress created a formal refugee system decades later, but the federal government has continued to use parole to respond to emergencies, such as to quickly grant entry to 125,000 Cubans who arrived in Florida during the 1980 Mariel boatlift and to Haitian orphans left homeless by a January 2010 earthquake. Officials have also used parole to reunite families separated by years-long backlogs for visas to come to the United States.

Parole is different from the official U.S. refugee system, which conducts lengthy background checks on candidates before allowing them to come to the country permanently.

After people enter the United States via parole, they can attempt to apply for asylum and generally enjoy an easier path to a form of permanent legal residency than someone who enters the country illegally.

A 2008 Memorandum of Agreement among Homeland Security agencies called parole “an extraordinary measure,” and said it was “not to be used to circumvent normal visa processes and timelines.”

While Biden officials use it to extend humanitarian protections, they have also been using a different form of the measure as a management tool to cope with overcrowding at the border. U.S. Customs and Border Protection reported nearly 2.4 million illegal crossings during the 2022 fiscal year that ended Sept. 30, an all-time high, and immigration arrests have remained at historic levels since then.

At peak times of illegal crossings, Border Patrol officials have been authorized to release migrants faster and refer them to U.S. Immigration and Customs Enforcement for “alternatives to detention,” typically some form of electronic monitoring that could include telephone check-ins. Migrants who enter the United States with this type of arrangement are not granted work authorization and they technically face deportation, even if the chances they will be arrested and sent home are low.

More than half a million migrants have been released using a different form of parole along the southern border since federal officials began using the authority in July 2021 to expedite processing of migrant families, according to the Government Accountability Office, which examined the new system in a September report. Agents later began using the authority to release adults traveling solo as border apprehensions swelled.

Booking a migrant into the immigration court system can take more than two hours, but using the latest process can take 30 minutes, the GAO found. Of the 1.1 million migrants admitted into the United States last year, a third were granted parole.

The GAO found that ICE was struggling to manage the people under its supervision, and it remains unclear when their cases will be heard in the backlogged immigration courts.

Biden officials say the newer uses of parole that direct migrants to online applications give them an incentive to apply for legal entry, rather than hiring a smuggler and risking a dangerous journey.

According to two senior Department of Homeland Security officials, illegal crossings have dropped since the administration announced the new parole program Jan 5.

The officials, who spoke on the condition of anonymity because they were not authorized to discuss the preliminary data, said the pattern is similar to the decline they saw in October after the administration created a parole program for Venezuelans that also ramped up expulsions to Mexico for illegal entrants.