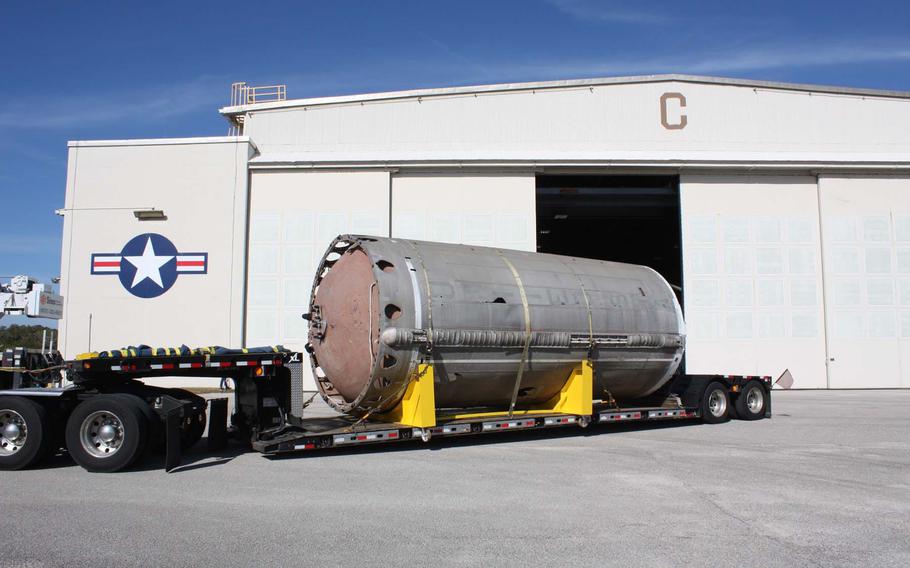 A portion of the first-stage booster used during the Gemini-Titan 5 mission that launched astronauts Pete Conrad and Gordon Cooper into space on Aug. 21, 1965, was hauled to its new home at the Cape Canaveral Space Force Museum. (Air Force Space and Missile Museum Foundation/Facebook)

(Tribune News Service) — While SpaceX launches and recovers its rocket boosters on a regular basis, it has taken nearly 60 years for NASA’s first-ever rocket stage to be recovered to make its way back to Florida.

A portion of the first-stage booster used during the Gemini-Titan 5 mission that launched astronauts Pete Conrad and Gordon Cooper into space on Aug. 21, 1965, was recovered at sea after it was found floating off the coast of Bermuda in the Atlantic Ocean.

The 27-foot-long fuselage, the upper part of the first stage that was jettisoned was part of the rocket Ala., took off from what was at the time Cape Kennedy’s Launch Complex 19. After its recovery it was put on display in Huntsville, Alabama, popular for its Space Camp, at the U.S. Space and Rocket Center.

On Thursday, it was hauled in by an extra-wide load truck to its new home at the Cape Canaveral Space Force Museum to be displayed in Hangar C.

“We welcomed a new addition to the museum’s collection today! The Gemini-Titan 5 booster arrived and was placed on display in Hangar C. Many thanks to the U.S. Space Force Historical Foundation for funding this project. The contractors did an amazing job with stabilization, display cradle, and delivery,” reads a statement posted to the museum’s Facebook page.

It was the third crewed launch of the Gemini program, which paved the way for NASA’s Apollo missions to the moon.

“The flight was designed to last eight days and test rendezvous procedures,” according to a mission profile from NASA’s Space Science Data Coordinated Archive. “The major objectives of this mission were to demonstrate a long-duration crewed flight, evaluate the effects of long periods of weightlessness on the crew, and test rendezvous capabilities and maneuvers using a rendezvous evaluation pod.”

Previously known as the Air Force Space and Missile Museum, it’s not open to the general public as it’s located within what is now Cape Canaveral Space Force Station, although there are scheduled tours at certain times of the year that include visiting Hangar C, such as visits to the lighthouse. A small portion of the museum’s collection is on display just outside the installation’s gates near Port Canaveral at the Sands Space History Center.

“It is the only recovered booster from the entirety of America’s early crewed space programs, from Mercury through Apollo,” reads a statement from the U.S. Space Force Historical Foundation. “Its inclusion in the museum’s expanding artifact collections will help generations to come understand Cape Canaveral’s unique role in space history. This is where history is launched.”