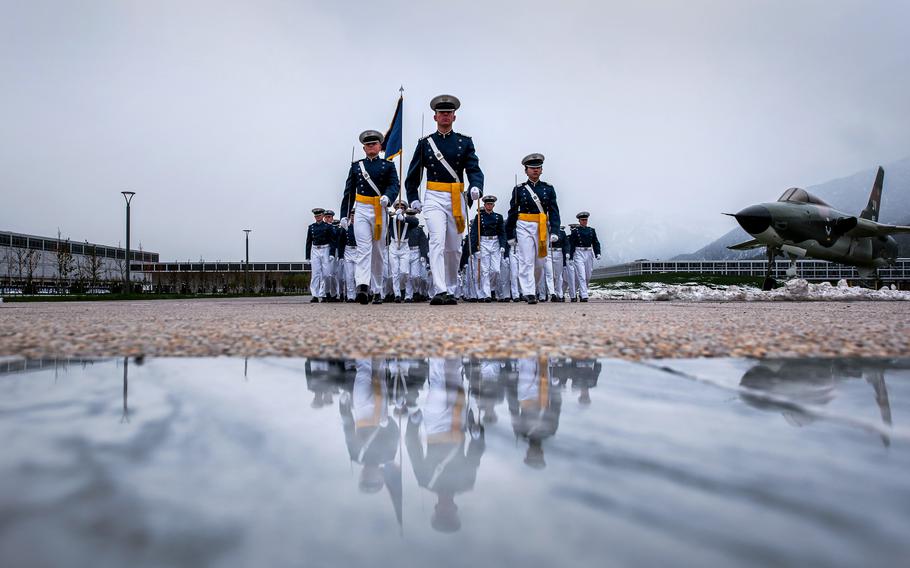 U.S. Air Force Academy cadets march on the Terrazzo on their way to Stillman Field during the graduation parade for the class of 2022 on May 24, 2022, in Colorado Springs, Colo. (Trevor Cokley/U.S. Air Force )

Cadet Justin Couty faces allegations that he sexually assaulted four women in a case that will be decided by Judge Lt. Col. Dayle Percle. Couty chose to have his case decided by a judge, rather than a jury.

During opening statements at the Air Force Academy, 1st Lt. Latravious Johnson laid out accusations of rape and unwanted sexual contact that happened in 2019 and 2021. “After he finished with one victim, he went to the next one,” Johnson said.

Civil attorney Michael Waddington spoke in Couty’s defense, pointing out in some cases the women didn’t tell Couty to stop, and when they did verbalize discomfort, Couty followed their wishes. He also noted the allegations arose in an environment where rumors involving Couty were flying online.

The first woman to testify, a second lieutenant in the Space Force, described how she was friends and classmates with Couty when they went out to dinner together in November 2019. That night he accompanied her back to the home where she was staying and other cadets were drinking.

Later that night, he joined her in bed with her consent, although she offered alternative places for him to sleep. She allowed him to stay in her bed because she trusted him, she said. They started kissing, but then she told him she was too drunk to go on and moved away from him to go to sleep.

She testified after that he pinned her to the bed and raped her from behind.

However, Waddington also pointed out through cross-examination that her way of asking him to stop was to ask him to change positions.

The woman noted after Couty moved that it was clear to him that she was upset, and he later gave her a handwritten apology letter.

She reported the case for the “greater good,” she said. “I didn’t want it to happen to anyone else,” she said.

In a February 2021 incident, Couty is accused of touching the breast and groin of a former cadet while in bed with her, Johnson said. He was in her room and with her in bed with her consent, because she considered him as close as a brother, he said.

Waddington countered that their relationship was not familial and questioned the credibility of the woman, who is now a civilian.

In March 2021, a woman who is now a second lieutenant was kissing Couty and when he started touching her groin, she stopped him and asked him to wash his hands. When he returned, he started kissing her again and went on to rape her, Johnson said. However, he noted that she “could not bring herself to say the word” no at that point after asking him to stop earlier.

Waddington pointed out that when she asked him to stop, he had stopped.

The fourth woman, a current cadet, alleges that while she was in a relationship with Couty, he raped her while she was feeling ill, Johnson said.

In Couty’s defense, Waddington said the woman did not verbally tell him to stop. The allegations and anonymous postings online have created ongoing prevalent pressure for Couty, Waddington said.

“People were talking about flaying him alive,” he said.

Depending on the charges Couty is convicted of, he could face severe consequences. Those found guilty of abusive sexual contact can face penalties including up to seven years of confinement, forfeiture of pay and allowances, reprimand and dismissal, the equivalent of a dishonorable discharge, said Dean Miller, a spokesman for the academy.

Those found guilty of sexual assault face similar consequences and a maximum of 30 years in prison.