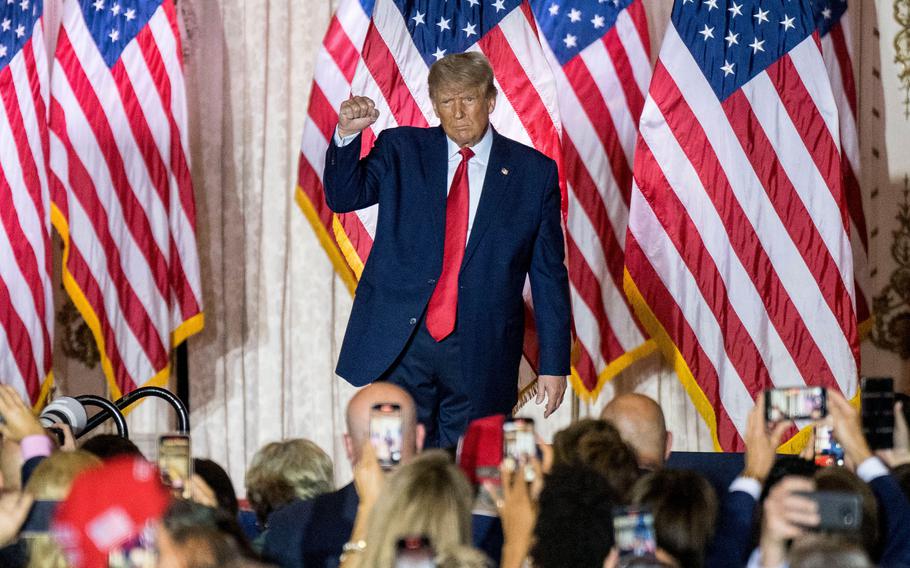 A lawyer for Donald Trump's 2024 presidential campaign has formally asked Facebook's parent company to allow him to return to the platform, arguing that a two-year-old ban in the aftermath of the Jan. 6, 2021, attack on the Capitol has "dramatically distorted and inhibited the public discourse."

In a letter to Mark Zuckerberg, chief executive officer at Meta, and other company officials, the lawyer noted that Facebook instituted a ban on the former president that was scheduled to come up for review after Jan. 7 of this year. The lawyer, Scott Gast, requested a meeting "to discuss President Trump's prompt reinstatement to the platform."

"Donald Trump is a declared candidate for President of the United States," the letter, dated Tuesday, said. "He is the leading contender for the Republican nomination in numerous public opinion polls. … [W]e believe that the ban on President Trump's account on Facebook has dramatically distorted and inhibited the public discourse. We also believe that a continued ban would basically constitute … a deliberate effort by a private company to silence Mr. Trump's political voice."

Trump's Facebook and Twitter accounts were blocked following the Jan. 6, 2021, attack on the Capitol by a pro-Trump mob that ransacked the building, threatened the life of Vice President Mike Pence and congressional leaders and resulted in five deaths. The House impeached Trump on a charge of incitement of insurrection; the Republican-led Senate acquitted him after a trial.

Meta suspended Trump indefinitely on Jan. 7, 2021. The company's Oversight Board, an independent group of human rights experts, academics and lawyers that issues binding rulings on some of Meta's content moderation decisions, later upheld the suspension but criticized the company for not establishing criteria for suspending a user indefinitely.

The company then shortened the suspension to two years and said, when that period was over, it would assess whether the public safety risk had subsided enough to restore his account.

Last week, Meta spokesperson Andy Stone said in a statement that the company would announce a decision about whether to reinstate Trump "in the coming weeks in line with the process we laid out."

Where Meta comes down on that decision could have widespread ramifications, experts say. While the country isn't experiencing the same threat of a violent political insurrection that characterized the weeks leading up to Jan. 6, Trump's rhetoric about election fraud — and the movement of people that were inspired by his remarks — continues to percolate online. That should be enough, some argue, to keep him off the platform.

In its letter, Gast argued that Trump's reinstatement is consistent with holding a fair election.

"At a time when the United States faces critical issues that impact its citizens and the world, and at a time when the country begins the process of choosing its next president, we believe that Meta should be encouraging a full and robust dialogue, not silencing presidential candidates," Gast said.

The Washington Post's Naomi Nix contributed to this report.