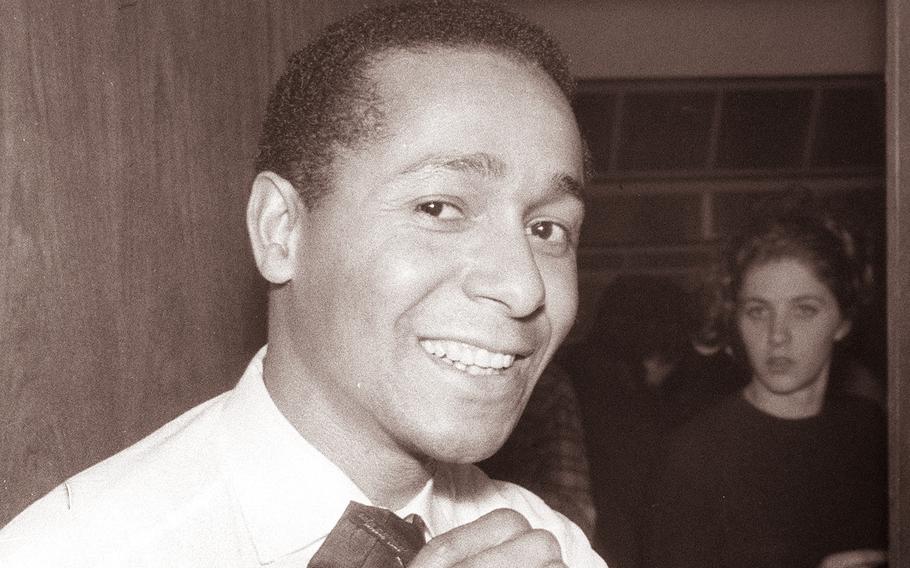 Arthur Duncan adjusts his necktie on March 1, 1962. Duncan, a tap dancer and singer who became one of the first African American regulars on a TV variety show, joining “The Betty White Show” in 1954 — to the dismay of some viewers who tried to get him fired because of his race — and later showing off his footwork on Lawrence Welk’s weekly music series, died Jan. 4 at a care center in Moreno Valley, Calif. He was 97. (Wikimedia Commons)

Arthur Duncan, a tap dancer and singer who became one of the first African American regulars on a TV variety show, joining “The Betty White Show” in 1954 — to the dismay of some viewers who tried to get him fired because of his race — and later showing off his footwork on Lawrence Welk’s weekly music series, died Jan. 4 at a care center in Moreno Valley, Calif. He was 97.

The cause was a stroke and pneumonia, said his wife, Carole Carbone, who noted that Duncan was still looking for his next gig as recently as last month. “He was performing until the end,” she said.

A veteran song-and-dance man who entertained audiences at Lincoln Center, Carnegie Hall and U.S. military bases overseas, Duncan was a link to an earlier era of tap, when the art form was an exhilarating staple of theaters, nightclubs and Hollywood musicals. For many viewers, his hundreds of performances on “The Lawrence Welk Show,” where he appeared from 1964 until the host retired in 1982, were one of the only ways to see tap dancing during that period.

His performances were a reminder “that the art form never died,” and that “it would always live somewhere, through someone’s feet,” said Jason Samuels Smith, a tap dancer, choreographer and director. “He was really not just a mentor but an idol for us in the tap community,” Samuels Smith added in a phone interview.

Duncan was in his late 20s — already elegant and assured at that early age — when he rose to prominence as a performer on NBC’s “The Betty White Show,” a daytime talk show hosted by the future star of “The Mary Tyler Moore Show” and “The Golden Girls.” The series had aired locally in Los Angeles before being picked up by NBC in 1954, and Duncan signed on for a few episodes as a performer, impressing White with his performance of “Jump Through the Ring.”

For the most part, audiences were thrilled. “The fan mail began to pour in demanding more and more of Arthur,” Los Angeles Times television editor Walter Ames wrote in November 1954. “Betty got the message and now Arthur is a permanent member of her cast.”

Yet according to White, Duncan’s performances also drew racist criticism from viewers who objected to seeing Black and White performers on the same stage. “A few of the stations that carried our show through the South notified us that they would, ‘with deep regret, find it most difficult to broadcast the program unless Arthur Duncan was removed from the cast,’” White wrote in a 1995 memoir, “Here We Go Again.”

The host refused to budge. Interviewed for a 2018 documentary, “Betty White: First Lady of Television,” she said she told her bosses at the network, “I’m sorry, but, you know, he stays.”

NBC backed her up. The issue was dropped, and Duncan — who credited White with helping launch his career — said that he had no idea there had been a controversy until he read the TV host’s memoir. Meanwhile, their show changed time slots several times, struggling to build an audience before it was dropped by NBC at the end of the year.

Duncan later toured overseas, living for a time in Australia and Switzerland before joining “The Lawrence Welk Show,” which was broadcast by ABC and later aired in first-run syndication. The show featured danceable, sentimental big-band music that Welk — an accordionist and bandleader — described as “Champagne music.” Duncan, the show’s only Black regular, helped make the bubbles pop, performing effervescent routines by himself (he sometimes danced atop a piano) or with dancers Bobby Burgess and Jack Imel.

By then he had become known for his impeccable timing, deep reserves of energy and wide-ranging routines, which included a leg windup that he called the “windmill step.” His dancing “generally followed a standard recipe of solid rhythm and big finishes, yet the variety of steps was impressive,” dance critic Brian Seibert wrote in “What the Eye Hears: A History of Tap Dancing” (2015). “Stealing from many sources, he rarely repeated himself.”

To ensure that the “Lawrence Welk Show” musicians didn’t overpower his dancing, Duncan prerecorded his taps. “I didn’t take chances,” he told Seibert, adding that the method came at the cost of improvisation: “It locked me in a situation where I couldn’t experiment.”

Still, his performances helped inspire a younger generation of dancers, including Dianne “Lady Di” Walker and Gregory Hines, who said they watched “The Lawrence Welk Show” just to see Duncan perform. Collectively, they helped spearhead a tap renaissance in the 1980s, when Duncan returned to center stage while performing at concerts and in films such as “Tap” (1989), which starred Hines and Sammy Davis Jr., as well as veteran dancers including Steve Condos, Howard “Sandman” Sims, Jimmy Slyde and Harold Nicholas.

A white-haired Duncan later starred opposite Samuels Smith in the 14-minute dance film “Tap Heat” (2004), which led to a full-length documentary, “Tap World” (2015), spotlighting performers from around the globe. In 2020, he was inducted into the International Tap Dance Hall of Fame.

“Lawrence would introduce me as ‘the man keeping tap dance alive,’” he recalled in a 2005 interview with the Chicago Tribune. “I was one of the few at that time. Today, I believe tap is being reborn.”

Arthur Chester Duncan was born in Pasadena, Calif., on Sept. 25, 1925. Most biographies say he was born in 1933, a mistake Duncan didn’t bother to correct. “He never wanted to discuss anything personal,” his wife said.

One of 13 children, he learned his first tap routine at age 13, after being recruited to dance at a junior-high event with a few friends, and was soon practicing on the streets of Pasadena while working as a newsboy. Still, he figured he would work as a pharmacist, not as a dancer, and after serving in the Army during World War II he enrolled in community college, taking occasional dance bookings before deciding to go on a six-month sabbatical, just “to see what this show business was all about,” as he later put it.

Duncan made his TV debut in 1951, on entertainer Jerry Colonna’s variety series, and appeared on a few episodes of “Hollywood on Television,” a precursor to “The Betty White Show.” He also refined his tap technique with help from Hollywood dancer and choreographer Nick Castle, who advised him to simplify his routines, saying, “Do something that people can understand.” (Castle’s son Nick Castle Jr. later wrote and directed “Tap.”)

By the late 1950s Duncan was performing overseas, becoming the first Black entertainer to join Bob Hope’s USO troupe, according to a report in Jet magazine. He later ventured into stage musicals, performing in a 1980s touring production of “My One and Only” that starred Tommy Tune and Stephanie Zimbalist. He also appeared in a 1992 “Diagnosis: Murder” TV movie with Dick Van Dyke and danced on an episode of “Columbo.”

In addition to his wife of four years, of Moreno Valley, survivors include a stepson, Sean Carbone, of Los Angeles; a brother; and two sisters. An earlier marriage to Donna Pena ended in divorce.

Duncan most recently performed in June at Chicago’s Old Town School of Folk Music, accompanied by dancer Reggio “The Hoofer” McLaughlin. He was still sharp, telling band members when they were playing too slowly during rehearsal, according to McLaughlin, even if he acknowledged to the audience that his balance was “a little off.”

“You know the saying ‘There’s no place like home’? Being on the stage was like” home for him, McLaughlin said. “That’s when he was in his element.”