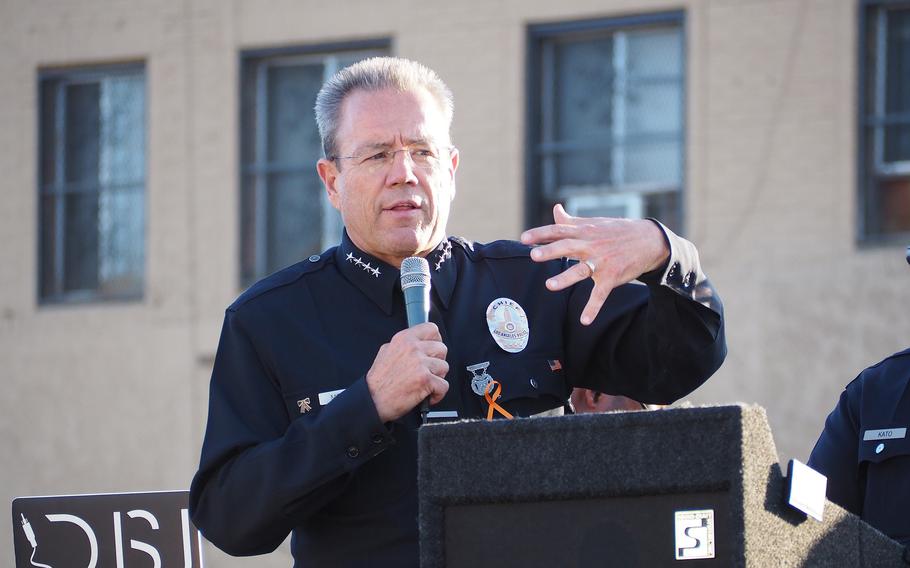 The deaths of three men in rapid succession this year after encounters with Los Angeles police officers has exposed a distressing lack of progress the department has made reducing police violence and managing people in crisis, despite a years-long effort to lessen the risks in such cases.

The killings occurred in the first week of January, and under pressure, a department with a problematic history of violence released body-camera footage of the fatal encounters in recent days. Two of the men suffered from mental illnesses, while a third, a D.C. schoolteacher, died after being Tasered by officers as he allegedly fled the scene of a car accident.

The last case, which ended in the death of 31-year-old Keenan Anderson, revived grim memories of the murder in Minneapolis of George Floyd in May 2020 at the hands of police officers that Anderson cited in chilling body-camera footage of his encounter released this week. It also evoked the LAPD’s violent past, most recently its harsh response to the large demonstrations following Floyd’s murder and the videotaped police beating more than three decades earlier of Black motorist Rodney King, which also set off violent protests.

The department has been a flash point in the city’s political and social life for decades and was once subject to Justice Department oversight after the discovery that one service area, known as Rampart, had routinely engaged in corrupt practices that included false arrests, excessive force and unreasonable searches. A succession of chiefs since the early 1990s has pledged to change LAPD culture.

The LAPD’s handling of the new cases, which even LAPD Chief Michel Moore criticized in a public appearance this week, also comes at a delicate political moment for the agency and for the city’s new mayor, Karen Bass (D), who was sworn into office last month. Moore, who became chief in 2018, is in the process of seeking a second, five-year term with uncertain support from the city’s new leadership.

Bass campaigned in part on a platform to make the department more responsive to the public’s demands, which include a far less aggressive approach to policing, especially in neighborhoods of color. Two of the men killed were Black and the third was Latino.

A former community activist, member of Congress and state legislator, Bass is the first Black woman to hold the post. Bass won the open seat for mayor in the November election.

As she settles into office with a focus primarily on corralling the city’s homeless crisis, Bass is also confronting the fallout from a leaked audio tape of a trio of Latino city council members and a prominent labor leader using racist language to criticize council district boundaries, which help portion out power between the city’s Black and Latino neighborhoods. Two of the council members have departed, but the killings this month have added an additional layer of racial tension to the city’s already fraught debate over political power and accountability.

“What you have now is this convergence - a new mayor, a police chief seeking another term, and an increase in violent crime despite it subsiding somewhat from highs during the pandemic,” said Fernando Guerra, a political science professor and founder of the Thomas and Dorothy Leavey Center for the Study of Los Angeles at Loyola Marymount University.

“The fact is you can change the players - a new mayor, a new chief - but you are not changing the facts on the street,” Guerra said. “It’s an easy out in some ways to change the players, but it’s still a tough call.”

In a statement this week on the killings, Bass said that “no matter what these investigations determine . . . the need for urgent change is clear.”

“We must reduce the use of force overall, and I have absolutely no tolerance for excessive force,” she said in the statement. “We must also lead our city forward - finally - on the mental health crisis that has been allowed to grow, fester and cause so much harm to individual Angelenos, their families and our communities.”

But Bass has gotten off to an awkward start with Moore, who authorized the release of the body-camera footage this week well ahead of the 45-day deadline to do so. Late last year, Moore formally requested reappointment to the chief’s post and has been seeking to rally support around his serving another term.

In a letter written last month seeking support for another term from the nonprofit Los Angeles Police Foundation, an independent fundraising arm of the agency, Moore wrote that he had the new mayor’s “full support.” He was almost immediately forced to apologize after the mayor’s office disclosed that she had not decided whether Moore should remain in the job.

Moore’s fate is in the hands of a five-member police commission, which is appointed by the mayor. But the current commission is a holdover from the previous administration of Eric Garcetti (D), and its members indicated early in the process that they intended to reappoint Moore.

As details of the killings became public, Bass asked the commission earlier this week to hold off on reappointing Moore until she could conduct her own assessment of his performance, even though she will not officially have a say in the decision.

“The mayor and the police chief have one of the most important relationships in the city government,” said Raphael Sonenshein, executive director of the Pat Brown Institute for Public Affairs at Cal State Los Angeles, who also serves as one of nearly 100 volunteers on Bass’s civilian transition advisory team. “So it would be very unusual for the commission to appoint a chief that does not have the mayor’s support.”

Moore has said he is seeking another term to complete unfinished work.

But he acknowledged this week that one initiative that police officials have called integral to managing mentally ill subjects did not function correctly in at least one of the three fatal cases. The program is known as the Mental Evaluation Unit, which is designed to deploy trained social workers alongside officers on calls where mental illness may be involved.

On Jan. 2, officers responded to the apartment of Shameka Smith, who had called a non-emergency number to report that her husband had violated a restraining order she had secured against him.

During the call, she mentioned that 45-year-old Takar Smith had a history of severe mental illness. But the officers who responded did not call in a mental health team, and after a 15-minute, mostly incoherent confrontation with Smith, opened fire when he allegedly reached for a knife on the kitchen floor.

During the news conference this week when the body-camera footage was released, Moore acknowledged that “at no point during this call was our mental assessment team, also known as SMART, called to the scene to assist in this investigation.”

“At times you’ll see the officers on their body worn video attempt to verbally de-escalate the encounter,” he said. “However, I also have concerns regarding the final moments leading up to the shooting. We’ll be looking closely at this investigation as it’s completed.”

A day after the fatal encounter with Smith, LAPD officers shot and killed Oscar Sanchez, a 35-year-old whom a family attorney said had been diagnosed with major depressive disorder. Sanchez was killed after police officers, responding to reports of a man threatening people with a knife, shot him as he allegedly approached them with a spiked pole.

That same day police officers in Venice, a neighborhood in the city’s west side, repeatedly used a Taser on Anderson, the high school teacher and father visiting from D.C.

Video of the Jan. 3 incident shows Anderson being detained by multiple officers as he begs for his life shortly after a traffic collision. The department said Anderson initially cooperated with officers before attempting to flee the scene of the accident, which he was apparently involved in, before a DUI test could be administered.

At one point, body-camera footage shows an officer appearing to have his elbow on Anderson’s neck as he is detained in the middle of the road.

An officer is then shown using his Taser on Anderson two times, including one stretch that lasted about 30 seconds, uninterrupted. Anderson was eventually handcuffed and taken by ambulance to a hospital in nearby Santa Monica. There he was pronounced dead after suffering cardiac arrest, according to a police news release.

Anderson was the cousin of Patrisse Cullors, co-founder of Black Lives Matter. She said Anderson was a 10th-grade English teacher at the Digital Pioneers Academy, a majority-Black public charter school in Washington, and was in Los Angeles visiting family and friends.