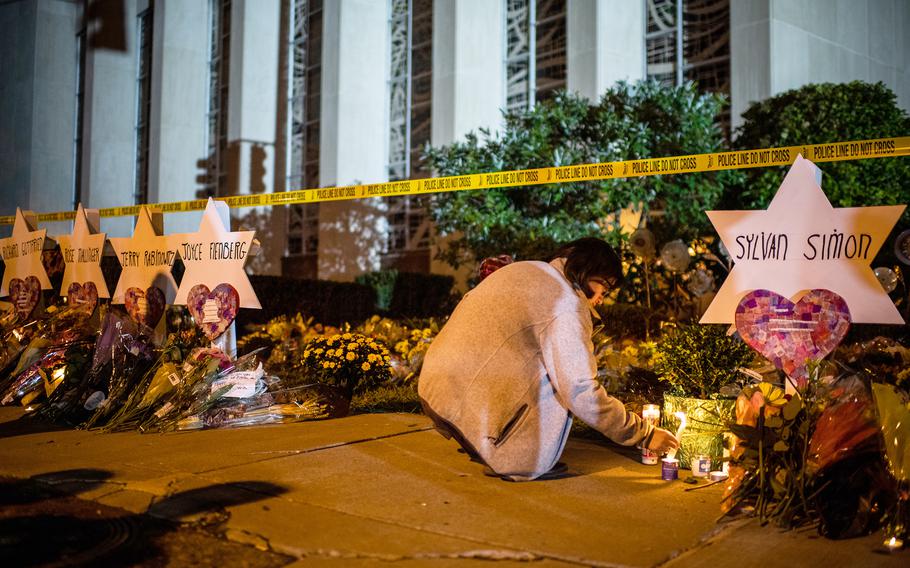 A woman leaves a candle in front of the Tree of Life synagogue after 11 people were killed during a 2018 shooting in Pittsburgh. (Salwan Georges/The Washington Post)

At points in the past half-century, many U.S. antisemitism experts thought this country could be aging out of it, that hostility and prejudice against Jews were fading in part because younger Americans held more accepting views than did older ones.

But a survey released Thursday shows how widely held such beliefs are in the United States today, including among younger Americans. The research by the Anti-Defamation League includes rare detail about the particular nature of antisemitism, how it centers on tropes of Jews as clannish, conspiratorial and holders of power.

The survey shows “antisemitism in its classical fascist form is emerging again in American society, where Jews are too secretive and powerful, working against interests of others, not sharing values, exploiting — the classic conspiratorial tropes,” Matt Williams, vice president of the ADL’s year-old Center for Antisemitism Research, told The Washington Post.

The study uses a new version of surveys the ADL has been doing in America since the 1960s in order to get at the specific nature of antisemitism and what makes it different from other types of hate. Its new metric is centered on affirming or rejecting 14 statements, including whether Jews “have too much control and influence on Wall Street,” “are more willing than others to use shady practices to get what they want,” or are “so shrewd that other people do not have a fair chance.”

The ADL’s center was created in response to a spike in the past few years of reported incidents of antisemitic violence and harassment, as well as a rise in antisemitic rhetoric from high-profile public figures.

That includes a march by neo-Nazis in Charlottesville in 2017 that turned deadly and attacks on Jewish targets in Pittsburgh in 2018 and Poway, Calif., and Monsey, N.Y., in 2019. It also includes antisemitic comments, including from former president Donald Trump in October, when he attacked American Jews in a post on his Truth Social platform, saying Jews in the United States must “get their act together” and show more appreciation for the state of Israel “before it is too late.”

Trump has multiple times raised the old antisemitic trope that U.S. Jews hold, or should hold, a secret or dual loyalty to Israel rather than or in addition to the United States. Almost 4 in 10 Americans believe it’s mostly or somewhat true that “Jews are more loyal to Israel than to America,” according to the ADL researchers. In the fall, the rapper and designer Ye — formerly known as Kanye West — said that Jews exploit Black people for financial gain, that African Americans are the legitimate descendants of Jews of the Bible and that there is some “financial engineering” to being Jewish.

It is difficult to assess whether antisemitic views have increased over time, given changes in the survey’s response options as well as how respondents were sampled. The survey was conducted in September and October among a national sample of 4,007 adults online through AmeriSpeak, a randomly sampled panel of U.S. households maintained by NORC at the University of Chicago.

Williams and some experts who helped review the study noted that it shows the views of Americans under 30 and those of Americans over 30 are very similar. Of Americans ages 18 to 30, 18% said six or more of the statements were true, while among those 31 and older, 20% did. Of younger Americans, 39% believed two to five statements, while among the older group, 41% did.

“It used to be that older Americans harbored more antisemitic views. The hypothesis was that antisemitism declined in the 1990s, the 2000s, because there was this new generation of more tolerant people. It shows younger people are much closer now to what older people think. My hypothesis is there is a cultural shift, fed maybe by technology and social media. The gap is disappearing,” said Ilana Horwitz, one of the survey’s reviewers, and an assistant professor of Jewish studies at Tulane University.

The “pervasiveness” of antisemitic tropes the study shows is what’s most interesting, Horwitz said. Even the fact that 3% of Americans say all of the original statements are “mostly or somewhat true” is alarming, she said.

The new research also delved into the differences between believing anti-Jewish tropes and negative sentiment toward Israel and its supporters.

“One of the findings of this report is that antisemitism in that classic, conspiratorial sense is far more widespread than anti-Israel sentiment,” Williams said.

The report highlighted that 90% of Americans agreed Israel “has a right to defend itself against those who want to destroy it” and that 79% agreed Israel is a “strong U.S. ally in the Middle East.” However, 40% at least slightly agreed that Israel “treats Palestinians like Nazis treated the Jews,” and 17% disagreed with the statement “I am comfortable spending time with people who openly support Israel.”

Alan Cooperman, director of religion research at the Pew Research Center and an adviser on the ADL project, said Judaism’s long history includes periods of ebbs and flows in antisemitism — sometimes long ones.

He noted that in 2013, Pew convened a dozen or more top experts on American Judaism for a survey and asked about their priorities and what areas needed more information and attention. The consensus at the time was that antisemitism was at a historic low in the United States and that, while it still existed, it wasn’t a pressing concern. When Pew talked to experts in 2020, their attitudes were “a complete sea change. They told us antisemitism is a very pressing issue and we need to devote a lot of attention to understanding it.”

The vast majority of U.S. Jews told Pew in 2020 that antisemitism had increased in the past five years, and a slim majority said they personally feel less safe.

Alvin Rosenfeld, director of the Institute for the Study of Contemporary Antisemitism at Indiana University at Bloomington, said antisemitism never goes away but morphs in its own unique ways.

In the West it has ancient roots in Christian teachings of Jews as satanic Christ-killers. In modern times, “religious bias gives way to racialized notions of Jewish inferiority or supremacy,” he said, noting this year is the 120th anniversary of the “The Protocols of the Elders of Zion,” an influential document falsely purporting to be a Jewish plan for world domination.

Then came Holocaust denial and types of critiques of Israel that are antisemitic.

“So the ‘new’ antisemitism dates way back. Charges of Jewish conspiracy, Jews in control of the media, politics, entertainment, the money world — all of that dates back way back. It’s multicausal today,” Rosenfeld said. “When hatred is so diverse, it’s more potent and dangerous.”