With record heat, floods and droughts, 2022 was among Earth’s warmest years

As five different scientific organizations this week classified last year’s intense heat — declaring it either the fifth- or sixth-warmest year on record — the impact of the Earth’s soaring temperatures became clear.

In 2022, the world experienced blazing heat waves, from the Southern United States to India, and devastating droughts from California to China. The high temperature also exacerbated floods - which inundated parts of the United States, Pakistan and Australia.

The planet has now warmed at least 1.1 degrees Celsius (2 degrees Fahrenheit) compared with preindustrial levels, and nearly every year in the past decade ranks near the top. On Thursday, the National Oceanic and Atmospheric Administration ranked 2022 as the sixth-hottest year on record and reported the 10 warmest have all occurred since 2010.

The World Meteorological Organization, which assessed the temperature data from all of these groups, reported the past eight years have been the eight warmest years on record.

Humans’ emissions of carbon dioxide and other planet-warming gases have driven this rapid warming, scientists say.

“This is a big change for the planet. And that activity has increased the amount of carbon dioxide in the atmosphere by 50 percent compared to where it was for the last few million years,” Zeke Hausfather, a research scientist at Berkeley Earth, said in an interview. “There’s often a debate between adapting to climate change and mitigating climate change. We don’t have the luxury of choosing anymore. We’re going to have to do both.”

Heat records fell last year despite the presence of La Niña, an episodic cooling of ocean temperatures in the tropical Pacific. The Earth’s top several warmest years on record have occurred during El Niño events, when the tropical Pacific has been warm. La Niña is likely to fade this year, which could boost the planet’s overall temperature and make weather around the world more extreme.

Without the moderate strong cooling effects of La Niña, 2022 would have been the second-warmest year on record behind 2020, Hausfather said.

Even as it ranked lower than some other years, 2022’s extremes harmed people and the environment around the globe.

“In 2022, we faced several dramatic weather disasters which claimed far too many lives and livelihoods and undermined health, food, energy and water security and infrastructure,” Petteri Taalas, secretary general of the World Meteorological Organization, said in a statement.

Bursts of excessive heat in Europe and Asia, especially in the late spring and summer months, helped the two continents post their second-warmest year on record.

Climate change is not only making periods of intense heat waves more frequent and prolonged, but is also causing a northward and southward expansion of extreme high temperatures, according to Larry O’Neill, the state climatologist of Oregon.

“We’re seeing these big heat waves that are coming into regions and systems that are not used to dealing with that, and don’t have any kind of mechanisms in place for adapting or dealing with it even in the short term,” said O’Neill, an associate professor at Oregon State University.

In mid-March, a warm spell in Antarctica pushed temperatures as much as 70 degrees above normal on the eastern parts of its ice sheet.

“This event is completely unprecedented and upended our expectations about the Antarctic climate system,” Jonathan Wille, a researcher studying polar meteorology at Université Grenoble Alpes in France, told The Washington Post at the time.

Blistering temperatures in India and Pakistan spanning from March to May were so high that pavement buckled and at least 90 people died. India registered its hottest March on record, and Pakistan and northwestern and central India endured their hottest April.

The World Weather Attribution project, an international research effort to estimate on the human influence on extreme weather events, found human-caused climate change made the historic heat wave over the two countries at least 30 times as likely.

Sweltering summer temperatures in England were linked to nearly 3,000 deaths in people 65 and older, according to the U.K. Health Security Agency. On July 19, the temperature in Britain surpassed 104 degrees (40 degrees Celsius) for the first time on record. The World Weather Attribution group concluded that global warming made that heat wave “at least 10 times more likely.”

In the United States, more than 7,000 heat records were broken over the summer.

Catastrophic flooding in Pakistan — coming just weeks after its historic siege of heat — destroyed more than a million homes and left nearly 1,500 people dead. The prolonged rainfall and flooding altered the lives of 33 million Pakistanis. During the summer months, the country experienced 190 percent more rainfall than average. The World Weather Attribution project showed that climate change probably intensified this rainfall by 50 to 75 percent.

St. Louis registered its wettest day on record on July 26, when a sudden cloudburst unloaded 7.68 inches in just six hours and 8.64 inches overall. The downpours triggered flash flooding and killed at least one person.

Throughout the year, eastern Australia saw numerous waves of flooding rain; one in October displaced thousands of people. Sydney saw its wettest year on record with nearly 100 inches of rain, more than double its average.

Europe was gripped by its worst drought in the past 500 years, triggered by a persistent lack of precipitation and multiple heat waves. A report from the European Union’s Joint Research Center found that nearly half of Europe was under drought warning conditions, including Italy, Spain, Portugal, France, Germany, the Netherlands, Ireland and the United Kingdom.

Thousands of miles away, California experienced its third straight year of drought while the United States overall had its third-driest year. On Oct. 25, 63 percent of the United States was experiencing the drought conditions, the largest area since 2012. Numerous Western reservoirs saw their water supplies depleted, including Lake Mead, which shrank to a record low.

China suffered its worst drought on record, as sweltering temperatures and a lack of rain led to poor harvests and water shortages. Central and southern China saw parts of the Yangtze River dry up amid its historic heat wave.

While a new year has started, Hausfather warned, the warming that has fueled these extremes will not stop.

“Even if we get our act together and reduce our emissions dramatically, and get our emissions all the way down to zero, the world isn’t going to cool back down for many centuries, it’s just going to stop warming,” he said. “For better or worse, this is normal and it’s our job to keep something worse from becoming the new normal past this.”

The Washington Post’s Jason Samenow contributed to this report. 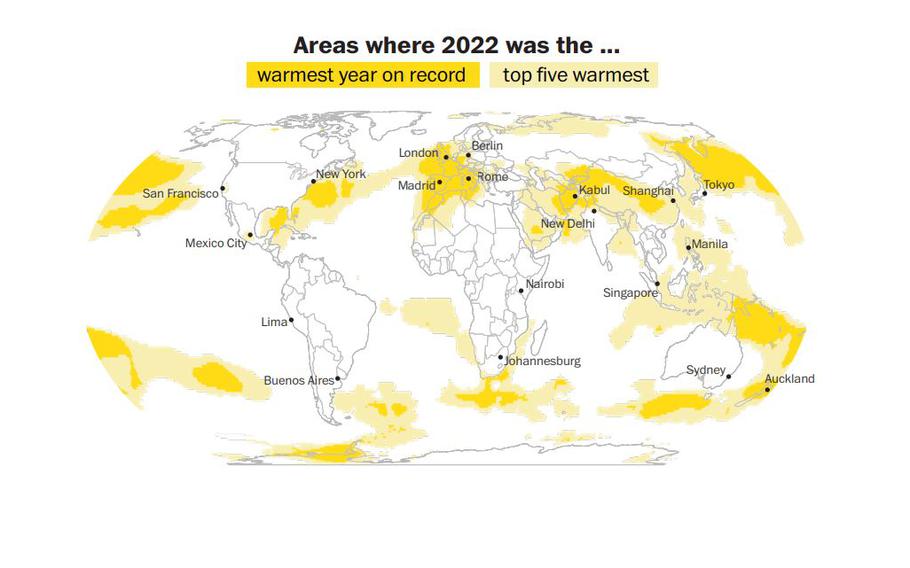