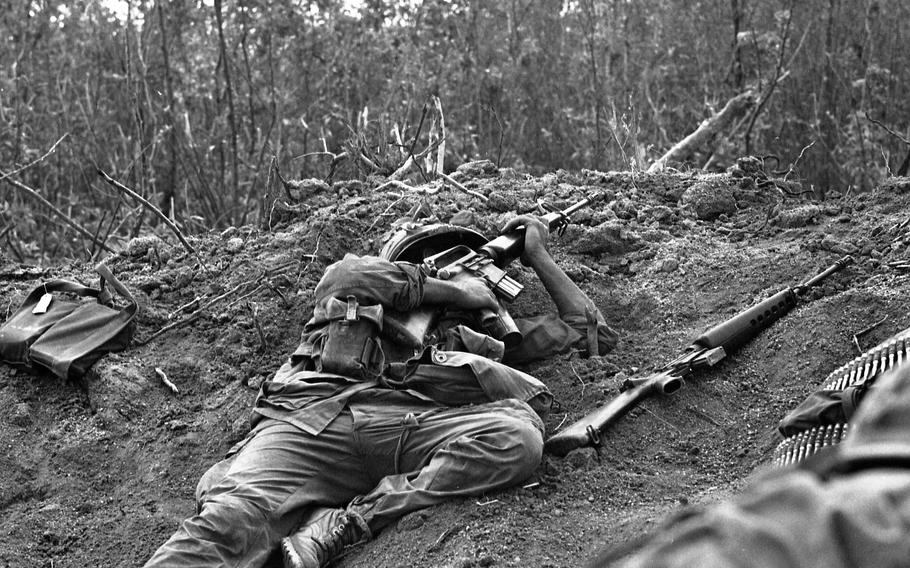 Unidentified soldier takes cover from enemy fire. A combined Infantry and Cavalry mission was halted when the North Vietnamese opened up. The action took place about 2000 meters from Landing Zone Ross, north of Chu Lai. After three hours of air strikes – some hitting as close as 50 meter from the men – the order to withdraw was given. (John Olsen/Stars and Stripes)

After his first trip to Vietnam in 1967, Senate Foreign Relations Committee staffer James G. Lowenstein had reason to be skeptical of military brass and their relentlessly cheery assessments of American progress.

He had gone to the Mekong Delta, a center of guerrilla fighting, and stayed at a settlement that was reputed to be safe for a visiting dignitary. He woke up the next morning to learn that three locals “had been assassinated during the night,” as he told it, while they were sleeping in the home of a village leader.

“I began to wonder that if this was a safe village, what was it like in the rest of the villages that weren’t considered safe,” Lowenstein added in an oral history. Later, after attending military briefings with Gen. William C. Westmoreland and other senior officers, he started to think that “someone, somewhere down the line wasn’t telling the truth,” he said.

Over the next several years, Lowenstein - technically a Foreign Service officer on loan to the Foreign Relations Committee as a consultant - became a front-page name, writing richly detailed committee reports that often contradicted official accounts from the White House. In travels to embassies, villages and jungle outposts across Southeast Asia, he procured information about military and intelligence operations while forging a like-minded partnership with Richard M. Moose, an equally tenacious committee staffer.

After the duo spent weeks crisscrossing Vietnam in December 1969, they prepared a report that questioned the Nixon administration’s assumptions about the strength of the South Vietnamese military. Five years before the war came to an end, they concluded that the conflict “appears to be not only far from won but far from over.”

The document was excerpted by newspapers, quoted on the nightly news and praised by the Senate staffers’ boss, committee chairman J. William Fulbright, who described it as “sober, dispassionate and revealing.” The Arkansas Democrat later sent Lowenstein and Moose on missions to Cambodia, Laos, Thailand, South Korea, Greece and the Philippines, with headline-making reports usually following in their wake.

“These reports got so much publicity,” Lowenstein recalled, “that a few senators began to complain that the staff was getting more attention than the members of the committee.”

Lowenstein, who died Jan. 3 at 95, later served as U.S. ambassador to Luxembourg and helped foster ties across the Atlantic, co-founding the French-American Foundation in New York and Paris. He had worked for the Marshall Plan in Paris at the start of his career, helping to rebuild Europe in the aftermath of World War II, and maintained a lifelong attachment to France, traveling there whenever he could.

Denise Bauer, the U.S. ambassador in Paris, tweeted that Lowenstein had “brilliantly served diplomacy” and was an “ardent promoter” of French-American relations.

For all his work as a diplomat, Lowenstein was perhaps best known as one half of the investigative duo known as “Moose and Lowenstein.” Frank G. Wisner, a former diplomat who spent almost a decade in Vietnam, said the Senate staffers were “known with fear throughout the Vietnam bureaucracy,” where they provoked comments such as: “Here come Moose and Lowenstein. What’ll they find today that will embarrass us?” (Moose, a fellow Foreign Service veteran, died in 2015.)

Lowenstein said that he had successfully argued for the fact-finding missions during a conversation with Fulbright, making the case that the Senate needed independent information to examine U.S. policies in Southeast Asia and elsewhere. Soon he and Moose were traveling to Vietnam, where they left their hosts behind and took to the countryside, “interviewing peasants, village chiefs, and field-grade American officers” who opened up to them about the war, according to an account by historian Randall Bennett Woods.

They employed a similar strategy elsewhere in the region, conducting interviews with locals and collecting documents wherever they could. In Laos, they reported that the CIA had spent about $70 million to fund guerrilla fighters as part of a “secret war” against communist forces. In Cambodia, they found that the U.S. Embassy was secretly coordinating bombing operations against insurgents, reporting new details about a military operation that was harshly criticized by members of Congress.

Lowenstein still nurtured ambitions as a diplomat, and after nine years with the Senate committee he returned to the State Department. He was deputy assistant secretary for European affairs during the Ford administration and was appointed ambassador to Luxembourg by President Jimmy Carter, serving from 1977 to 1981.

By then he was increasingly worried about the French-American relationship. During his time with the State Department and the Senate, he had been pained by anti-French attitudes he noticed among diplomats, politicians and the press. He saw a similar strain of anti-Americanism among the French and responded in 1976 by starting the French-American Foundation with historian James Chace and political scientist Nicholas Wahl, aiming to foster bonds between the countries outside official government channels.

Lowenstein served as vice chairman and helped develop the group’s signature Young Leaders Program, which brings together early-career politicians, lawyers, diplomats, artists and others from France and the United States. Alumni include Bill and Hillary Clinton, Secretary of State Antony Blinken and the most recent presidents of France, François Hollande and incumbent Emmanuel Macron.

“He was the heart and soul of the foundation,” said Allan M. Chapin, the group’s U.S. chairman. He recalled that Lowenstein would often attend the organization’s meetings, including at the Hôtel de Talleyrand, an 18th-century townhouse in Paris that once housed the Marshall Plan headquarters. Strolling through its hallways with guests, the retired diplomat liked to point out where he had once sat as a young State Department clerk.

James Gordon Lowenstein was born in Long Branch, N.J., on Aug. 6, 1927. His father, Melvyn Gordon Lowenstein, was a prominent lawyer whose clients included Yankees slugger Babe Ruth. His mother, the former Katherine Goldsmith, was a homemaker and the daughter of a textile magnate.

After graduating from the Loomis preparatory school in Windsor, Conn., Lowenstein studied international relations at Yale College, receiving a bachelor’s degree in 1949. He joined the State Department in 1950, served as a Navy officer for three years after the onset of the Korean War and was appointed a Foreign Service officer in 1957.

Lowenstein later worked as a political officer at embassies in Belgrade, in what was then Yugoslavia, and Ceylon, now Sri Lanka. After retiring from the Foreign Service as an ambassador, he was a senior consultant with the public affairs and communications company APCO, splitting his time between Washington and Paris. He was also an elections adviser in Sri Lanka and Bosnia.

His daughter said that Lowenstein died at his home in Washington of complications from a fall. In addition to his children, survivors include his longtime partner, Audrey Wolf; a brother; and three grandchildren.

Long after he left the Senate Foreign Relations Committee, Lowenstein still vividly remembered his travels with Moose. In the oral history, recorded in 1994 for the Association for Diplomatic Studies and Training, he recalled that during a trip to Phnom Penh, Cambodia, he and his partner “attended a dinner given by the American press at which they drugged our soup with hashish,” apparently as a prank.

He was “semiconscious for 24 hours,” he said, and was put in the awkward position of having to explain his situation to the French ambassador when he was invited to dinner at the embassy, while still dealing with an upset stomach and shaky hands.

“Don’t worry about it,” the ambassador told him. “The same thing happened to me the day before the secretary of state for foreign affairs arrived, and I couldn’t even stand up when he got off the plane.”