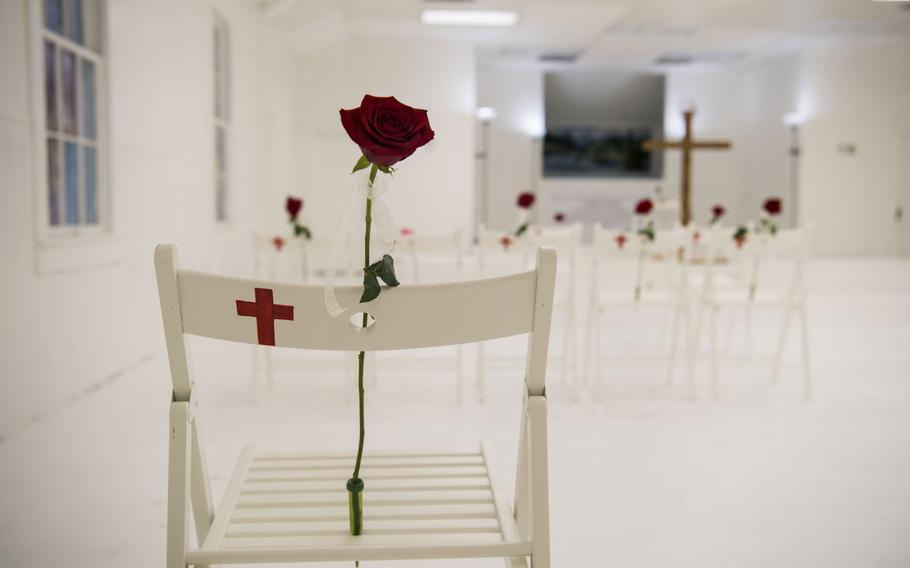 A memorial stands in the First Baptist Church of Sutherland Springs in Texas on Nov. 12, 2017, one week after 26 people were killed inside. (Carolyn Van Houten/The Washington Post)

The Justice Department asked a federal appeals court to overturn a ruling that found the government largely liable for the 2017 mass shooting at a church in Sutherland Springs, Texas.

In its appeal, the department argued that the Air Force’s “failure” to report the gunman’s criminal history to the national firearms background check system, which should have stopped him from buying weapons, did not make it “legally responsible” for the massacre.

In a brief filed late Monday with the U.S. Court of Appeals for the 5th Circuit, DOJ attorneys said U.S. District Judge Xavier Rodriguez erred when he ruled the Air Force was 60% responsible for the shooting, which left 26 people dead and 20 others injured at the First Baptist Church of Sutherland Springs.

Calling the attack an “inexpressible tragedy,” the Justice Department said it “unequivocally does not seek to excuse the Air Force’s failure” to report the criminal history of gunman Devin Kelley, a former airman who was dismissed from the military after a 2012 conviction for domestic assault.

“Nonetheless, under settled Texas and federal law, the United States is not liable for Kelley’s actions and is certainly not more responsible for those acts than the murderer himself,” the appeal reads. “Even if the government’s conduct might have contributed to the sequence of events ... the man who pulled the trigger that day cannot bear less than half of the responsibility for causing the injuries and pain of the victims and their families.”

The appeal comes nearly a year after Rodriguez ordered the government to pay more than $230 million to 84 victims and survivors of the shooting, who sued the government in 2018 after the Air Force admitted it had failed to report Kelley’s history of violence, which should have prevented him from buying the guns used in the attack.

In July 2021, Rodriguez found that the Air Force was mostly liable for the shooting, pointing to other details uncovered in the case, including that military officials were aware Kelley had previously researched and threatened a mass shooting and had a history of severe mental health issues that led officials to declare him to be “dangerous” and “a threat.”

According to testimony and evidence in the case, Air Force officials were so alarmed by Kelley’s threats of violence that he was permanently barred not only from the New Mexico air base where he served, but from all bases around the country. Yet Air Force officials did not report his conviction to the federal background check system or warn others of his potential for violence, a decision that Rodriguez condemned.

“The trial conclusively established that no other individual — not even Kelley’s own parents or partners — knew as much as the United States about the violence that Devin Kelley had threatened to commit and was capable of committing,” Rodriguez wrote.

But lawyers for the Justice Department’s civil division, which is handling the appeal, offered a sweeping criticism of that ruling, repeatedly emphasizing the five-year gap between the period when Kelley was dismissed from the Air Force and when he purchased the assault rifle he would later use to kill churchgoers.

The appeal acknowledges the government’s “failure to transmit information undermined the efficacy of a background-check system that should have prevented” Kelley from buying guns.

“But it is not necessary to excuse that failure in order to recognize that the government’s actions are not a legal cause of Kelley’s murderous assault under Texas law,” the appeal reads. “At a distance of five years, approximately 600 miles, and countless changes in circumstances and criminal acts in between, the government’s mistakes cannot be considered the proximate cause of plaintiffs’ injuries.”

The appeal comes after failed settlement talks between the Justice Department and lawyers representing the Sutherland Springs families.

After beginning talks in October, the government officially ended mediation last month. The move surprised the families as well as gun-safety groups that had urged the Justice Department to settle the case, arguing that an appeal would undermine the Biden administration’s position on background checks and tougher restrictions on guns. They said the position risked echoing talking points of the gun-rights lobby, a fierce opponent of the Biden administration’s gun-control efforts.

On Monday, the lobbying arm of the National Rifle Association posted an article on its website that said the Biden administration in deciding to appeal the case had angered its gun-control allies “by truthfully admitting” that background checks “can’t stop violent criminals.”

Gun control groups and those involved in the case have asked why the Biden administration has been reluctant to settle the Sutherland Springs lawsuit, even as it has reached settlements with families in other cases involving mass shootings.

Jamal Alsaffar, the lead attorney for the Sutherland Springs families, said last week the victims had offered to settle the case for less than the $230 million judgment to bring an end to a lawsuit that has left families and survivors struggling to pay large, ongoing medical bills.

On Monday, Alsaffar called the appeal “a blow” not only to the nation’s safety but also to his clients, a group that continues to suffer physically and emotionally from a church shooting that forever altered their lives.

They “have been bracing for this latest betrayal by their government. While expected, the reality of this blow is heartbreaking,” Alsaffar said.

Although the appeal has been filed, Justice Department officials have indicated that settlement talks could resume. Dena Iverson, a DOJ spokeswoman, said in a statement last week that the department remains “open to resolving the plaintiff’s claims through settlement and will continue our efforts to do so.”