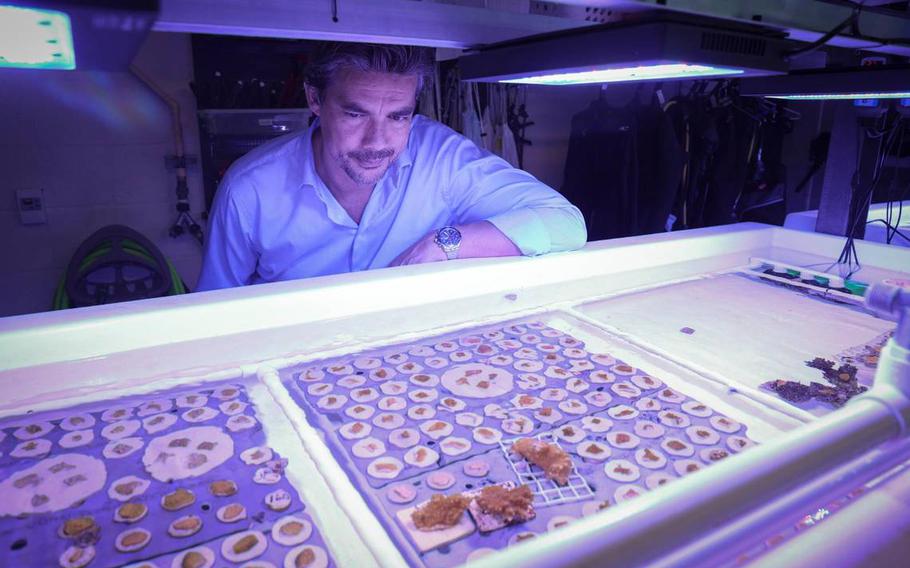 University of Miami marine biology and ecology professor Andrew Baker gazes at a crop of baby corals in a wet lab at the UM Rosenstiel School of Marine, Atmospheric, and Earth Science complex at Virginia Key on Thursday, Dec. 15, 2022. Baker is working on a military-funded research project to develop hybrid reefs composed of natural, living corals growing on a man-made structure that’s engineered to slow down waves. (Alie Skowronski, Miami Herald/TNS)

(Tribune News Service) — The U.S. military has an idea to save its seaside bases from some of their most relentless foes: flooding, erosion and storm surge.

The Defense Department spends billions of dollars to repair hurricane- and flood-related damage to its bases; in 2018, a particularly damaging series of storms caused $9 billion worth of destruction. Scientists — and military planners — expect that toll to grow as rising sea levels make storm surge and beach erosion worse.

To protect coastal bases, the Defense Advanced Research Projects Agency (DARPA) has enlisted corals, oysters and three international teams of scientists led by investigators at the University of Miami, the University of Hawaii and Rutgers University. The researchers are developing what they call “hybrid reefs,” which combine concrete structures with living coral reefs and oyster beds to break up damaging waves.

One day, the Defense Department hopes to deploy these super resilient reefs off the coast of military bases to reduce the amount of damage they take when they’re pummeled by waves.

“A lot of people are surprised that the [Defense Department] is doing this, but there are more than 1,700 military installations that are on coasts worldwide, and when they’re impacted by storms it causes billions of dollars of damage,” said Catherine Campbell, the DARPA program manager in charge of the project, “so we’re looking for ways that we can reduce the wave energy so we don’t have these severe impacts from storms.”

If they work, civilians could use them, too. Andrew Baker, a University of Miami marine biology and ecology professor and one of the principal investigators for the project, says he’d like to see hybrid reefs used in Miami-Dade County to protect barrier islands like Miami Beach and Key Biscayne from flooding and erosion.

“If you’re going to do this anywhere in the world and you want to get the maximum bang for your buck, there’s no better place than Southeast Florida because we’re just so vulnerable,” Baker said.

Coral and oyster reefs protect coastlines against flooding and erosion by breaking up big waves. When a wave bumps into a reef, some of its energy gets lost to friction as the water whirls through the rough surface of the reef. Another chunk of the wave’s energy gets redirected upward, causing the wave to break through the surface in a white, foamy crest that dissipates even more power.

All told, a well-placed reef can absorb as much as 97% of a wave’s energy, according to one 2014 meta-analysis published in Nature Communications that combined data from 27 previous research papers on reefs and wave energy.

Smaller waves reduce the amount of pounding that beaches, seawalls and coastal building foundations take on a daily basis. During hurricanes, smaller waves cut down the extent of flooding during storm surge, which can determine whether or not the water splashes over a seawall or laps up to the ground floor of a building. 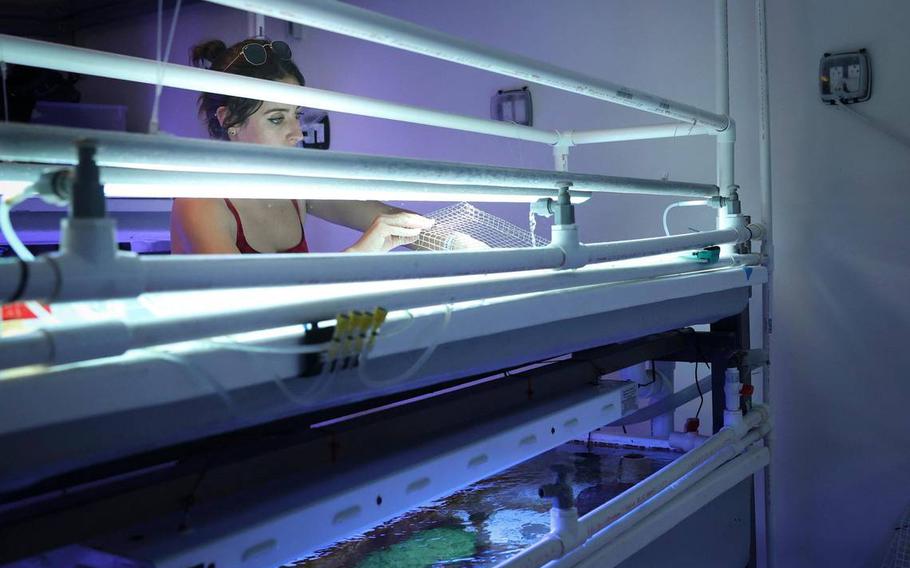 Catherine Lachnit, a Univeristy of Miami marine biology masters student, tends to her flock of sea urchins in a wet lab at the UM Rosenstiel School of Marine, Atmospheric, and Earth Science complex at Virginia Key on Thursday, Dec. 15, 2022. (Alie Skowronski, Miami Herald/TNS)

But, as climate change makes oceans warmer and more acidic, most of the world’s reefs are dying. Roughly half of the coral reefs that existed in 1950 are now gone, according to a 2021 paper from U.S. and Canadian scientists. Warmer seas, combined with overfishing and pollution, have also taken a toll on oyster reefs.

The decline of these reefs leaves the coastlines they used to protect more vulnerable to flooding.

That prompted the Defense Department to create a $19.4 million grant this year to fund the “Reefense” program, which aims to design hybrid reefs that can be built and installed quickly to protect military bases and coastal communities. UM is leading one part of the project, dubbed X-REEFS, which involves 29 professors at 11 universities developing hybrid coral reefs for the Atlantic Ocean. (The University of Hawaii is leading a similar project for coral reefs in the Pacific Ocean, while Rutgers is leading a team focused on oyster reefs in the Gulf of Mexico.)

The base of these hybrid reefs will be made up of artificial concrete structures designed to mimic the wave-breaking ability of natural reefs. These structures will stack together like LEGO bricks, have rough surfaces to help corals and oysters cling onto them, and be hollow and full of holes, which will cut down on material costs and also increase the amount of wave energy they absorb.

The concrete structures are beneficial because they can be installed quickly and immediately start breaking up waves. But the researchers will cover them with living corals or oysters that can slowly grow bigger and become better at knocking down waves over time. Plus, the living part of the reef gives the entire structure the ability to repair itself, because the corals or oysters will grow back if they get damaged by debris or a storm.

The military is also investing in speeding up the growth of corals and oysters and making sure they stay healthy, so that the hybrid reefs can expand “at least as fast as the healthiest reefs found in nature,” according to a 2021 project overview.

One team of Miami-based X-REEFS team is researching ways to make the artificial reefs friendly environments for corals while warding off the algae that compete with these creatures for habitat. Some scientists are developing anti-algal coatings for the concrete structures. Others, like UM marine biology masters student Catherine Lachnit, are raising sea urchins to live on the reefs. The urchins graze on algae like undersea billy goats, keeping the area clear for corals.

Another team of researchers, led by Baker, is working on biologically engineering corals so that they won’t simply die when they’re placed in the warming oceans. “We recognize that you can’t use corals, which are a climate change-sensitive organism, to solve a problem that is becoming worse because of climate change,” Baker said.

To toughen up the corals, the researchers plan to cross-breed hardy populations that have adapted to live in warm parts of the sea, like the southern coast of Cuba and the Mexican Caribbean Coast, using an aquatic version of in vitro fertilization, among other strategies.

The hybrid reefs showed promise during early lab tests in UM’s massive wind and wave tank on Virginia Key, which holds 38,000 gallons of water and can simulate Category 5 hurricane conditions.

The scientists put an artificial reef structure at the bottom of the tank and covered it with a smattering of small staghorn coral skeletons. The hybrid reef cut wave energy between 11% and 98%, depending on the reef design and the types of waves the researchers threw at it, according to a paper the researchers published in 2021.

The coral accounted for up to half of the hybrid reef’s wave stopping power in the study. But planting more coral reefs in the wild also brings environmental benefits. Local governments up and down Florida’s coastlines have been creating artificial reefs for decades, using everything from old ships to concrete rubble, but the goal with those has mainly been to attract divers and recreational anglers while reducing pressure on struggling natural reefs.

“Artificial reefs are not new, and to some degree even hybrid reefs are not new,” said Baker. “What’s new about all of this is thinking about: How do we do this in the best possible way? What’s the best design to reduce wave energy?”

In November, the Reefense scientists plan to begin building a 50 meter (160 foot) long hybrid reef that they’ll install off the coast from the Key West naval air base, where the runways of Boca Chica Field stretch almost into the sea. In early 2026, the researchers will build another 50 meter stretch of hybrid reef next to the first one, incorporating any new concrete designs, algae-fighting tactics or hardier corals they’ve developed along the way.

By then, according to the goals laid out in the DARPA grant, the team will have developed a technique for building hybrid reefs that can knock down 90% of wave energy at a cost of less than $300 per cubic meter of reef. If they succeed, they’ll have created a blueprint that city and state governments and the U.S. Army Corps of Engineers could use to install miles of artificial reefs to protect coastlines in areas where coral and oyster reefs naturally grow.

“Ultimately the goal is, whatever we learn from this, we want to scale it up and use it in other areas including here, closer to home, in Miami-Dade County or Broward,” said Baker.

This climate report is funded in part by a collaboration of private donors, Florida International University and the Knight Foundation. The Miami Herald retains editorial control of all content. 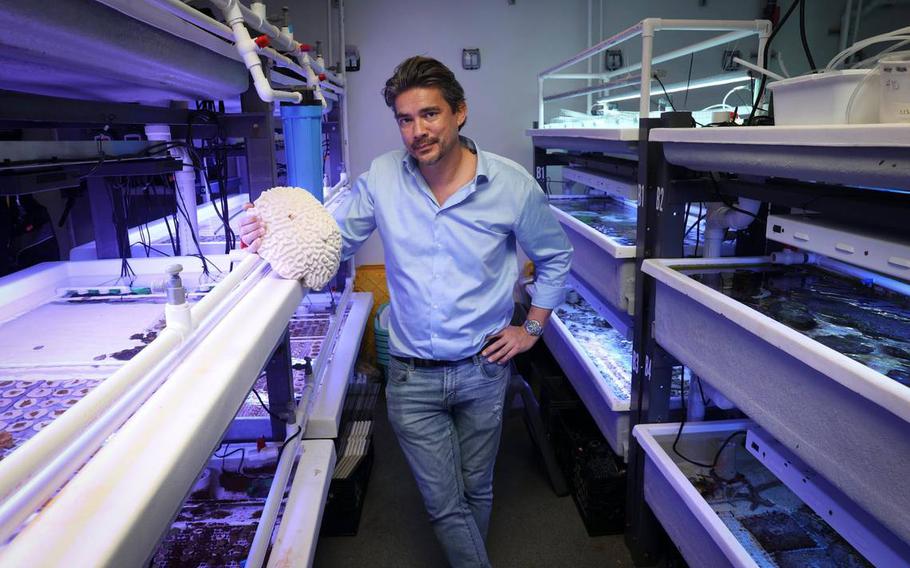 University of Miami marine biology and ecology professor Andrew Baker poses with a coral skeleton in a wet lab at the UM Rosenstiel School of Marine, Atmospheric, and Earth Science complex at Virginia Key on Thursday, Dec. 15, 2022. Baker is working on a military-funded research project to develop hybrid reefs, which are composed of natural, living corals growing on a man-made structure that’s engineered to slow down waves. (Alie Skowronski, Miami Herald/TNS)