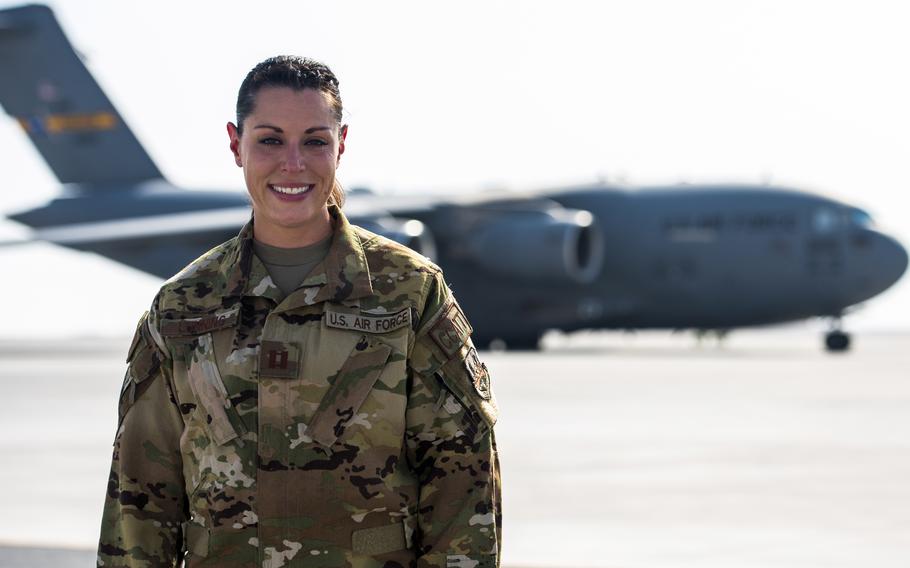 (Tribune News Service) — Only weeks after U.S. Air Force Capt. Maj. Katie Lunning kissed her husband and daughter goodbye at their Iowa home, she landed in Afghanistan on Aug. 26, 2021. A suicide bomber had just attacked the Kabul Airport, killing dozens of people, including 13 U.S. service members.

While most people were fleeing the scene of the blast, Lunning, a nurse and member of the 133rd Airlift Wing stationed at the Minneapolis-St. Paul Joint Air Reserve Station, was part of a three-person medical team that flew into Kabul to rescue and treat victims of the bombing at the Hamid Karzai International Airport.

Lunning rushed into a chaotic, dangerous, hostile area while bullets were still flying to save the lives of 22 critically injured people.

In American history, only 12 women and just five nurses have received the award.

The first woman to receive the award was famed aviator Amelia Earhart, Sen. Amy Klobuchar, D-Minn., said at the ceremony, noting that Lunning was making history at that very moment.

The 22 people onboard Lunning’s flight were of different ages and nationalities, Klobuchar said, but all had one thing in common: critical injuries. Lunning provided “excellent care under impossible circumstances,” Klobuchar said.

“Your bravery is an inspiration for so many,” Klobuchar told Lunning. “We are honored to have you in our presence.”

U.S. Sen. Tina Smith called nurses “the heroes of the nation’s health care system” and told Lunning, “You embody the very best our state and our nation has to offer.”

Lt. Gen. Michael Loh, the director of the Air National Guard, traveled to Minnesota for the ceremony Saturday. He called Lunning a “true American hero.”

It was by chance that Lunning was deployed at all, Loh said.

Lunning was working as a nurse at a Veterans Administration hospital in Des Moines, Iowa, when a nurse who had been scheduled for deployment to Qatar was unable to go.

Lunning volunteered to go in her stead.

In Qatar, Lunning joined her three-person team, consisting of a physician and a respiratory nurse. Called a Critical Care Air Transport Team, they were trained to bring injured Americans back to the U.S. from anywhere around the world within a three-day period.

Normally during a deployment, Loh said, there are two CCATT teams. But because of injuries and other unforeseen events, the other team was not deployed to Qatar, leaving Lunning’s team to work solo.

Under a normal deployment this would be challenging enough, Loh said, but as it turned out this particular deployment ended up being anything but normal.

The team worked nearly around the clock in Qatar treating injured Afghans who had fled as the Taliban swarmed their country.

She and her team often worked 20-hour days, bringing patients from the hospital to the airfield for care. Short flights were taken to Kabul to evacuate patients who were being treated at a makeshift hospital that the Norwegians had set up at the airport.

On Aug. 26, after one of these long days, Lunning was back in Qatar and drifting off to sleep when her team doctor called and said they were leaving in 20 minutes and to get dressed and ready to go.

As she ran out the door, she texted a family member back home: “I have no idea what is going on. I love you. I will text you when I can.”

At the time, “nobody was aware that a suicide bomber attacked the Kabul airport causing massive casualties,” Loh said.

Lunning soon found herself on a C-17 to Kabul. She later learned the Taliban had taken control and terrorist activist was increasing.

“When we landed it was a different feeling,” she said in a statement about the day. “The engines on the plane were still going.”

Once the team arrived in Kabul, Loh said, Lunning performed patient triage under “continuous small rounds fire” and an ongoing threat of another significant attack.

As she ran to load patients for transport, Lunning said she was thinking, “I couldn’t control the scary stuff, but I could nurse the patients that needed me. That is what I focused on.”

“What I remember the most was how everyone came together and the teamwork. We all worked towards a goal and wanted to do the right thing,” Lunning said.

Despite gunfire in a hostile and dangerous environment, the team loaded 22 critically injured people onto their aircraft.

Once in the air, the team treated the patients. Lunning’s efforts included performing lifesaving in-flight massive blood resuscitation of a critically injured post-operative patient and treating a 2-year-old with a traumatic brain injury and obstructed airway.

Her team was aboard one of the last C-17 convoys to leave Afghanistan in what officials call the largest U.S. humanitarian airlift in history.

She and her team worked on the patients during the eight-hour flight to Landstuhl, Germany. All 22 survived.

At one point, Lanning had a few seconds to reach her husband, Command Sgt. Major Josh Lunning. She told him, “I just got out of Afghanistan.”

He had a one-word response: “Wow.”

Gov. Tim Walsh spoke at the ceremony and told Lunning, “Thank you for being the embodiment of what we would all hope to be.”