This 17-year-old Philadelphia student saved a gunshot victim; he’s being honored by the US Army as a hero 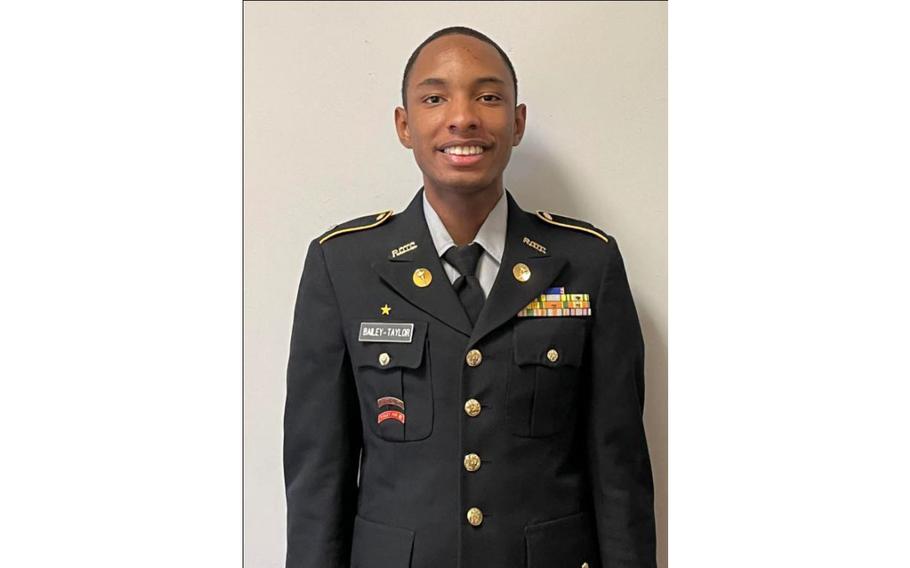 Kaheem Bailey-Taylor will receive the Medal of Heroism, the highest honor the U.S. Army gives to JROTC cadets, reserved for those who perform valiant acts demonstrating an “acceptance of danger and extraordinary responsibilities, exemplifying praiseworthy fortitude and courage.” (School District of Philedelphia)

PHILADELPHIA (Tribune News Service) — When gunshots rang out at a birthday party in North Philadelphia, most people raced away from the danger. Kaheem Bailey-Taylor bolted straight to the heart of the peril.

“My instinct was, I have a lot of family in there, and I need to help,” said Bailey-Taylor, 17. “I need to do something.”

In this case, doing something translated to using first-aid skills learned in his Philadelphia public school’s Junior Reserve Officers Training Corps program to help save his friend’s life. On Friday, Bailey-Taylor will receive the Medal of Heroism, the highest honor the U.S. Army gives to JROTC cadets, reserved for those who perform valiant acts demonstrating an “acceptance of danger and extraordinary responsibilities, exemplifying praiseworthy fortitude and courage.”

It is an honor rarely given. Among the last recipients were three JROTC students killed in the Marjory Stoneman Douglas High School shootings in Parkland, Fla. They were awarded the medal posthumously.

But Bailey-Taylor wasn’t thinking about any of that on a warm August evening when he attended his cousin’s 17th birthday at a rowhouse on North Bonsall Street.

Bailey-Taylor, a lanky youth with a wide smile and calm demeanor, was just leaving the party when he heard the gunshots. He sprinted the half-block back to the house where he saw three of his cousins and a friend, a fellow student at Philadelphia Military Academy, had been shot.

Although his cousins’ wounds were not life-threatening, his classmate’s injuries “were potentially fatal, and he needed to be rushed to the hospital ASAP,” said Bailey-Taylor, who had received first-aid instruction as part of his JROTC classes, plus lifeguard training.

Bailey-Taylor used his hoodie to apply pressure to the stomach wound. Two police officers were nearby and arrived within minutes; Bailey-Taylor briefed them on what he knew. The officers put his friend into the backseat of their cruiser, with Bailey-Taylor next to the victim.

“I put my fingers inside his wound to stop him from bleeding out,” Bailey-Taylor said. He kept talking to his classmate, anything to try to keep him conscious. The victim was fading in and out. “He said, ‘Bailey-Taylor, please don’t let me die.’ That message will always stay with me. It was somebody that I look at as an older brother.”

PMA, as it’s known, is a close-knit place, open to students from around the city who choose the structure and leadership opportunities of a school that operates like a military unit, with students earning ranks and all participating in JROTC. After doctors and nurses at Temple University Hospital took over his classmate’s care, Bailey-Taylor called another PMA student — the cadet commander — and a JROTC instructor from the school, who rushed to the hospital and stayed with the victim for hours.

Philadelphia police arrested a 17-year-old male in December in connection with the shooting.

The victim Bailey-Taylor helped save has mostly recovered from his wounds, thanks in part to Bailey-Taylor’s quick action and skills. He’s back at school, on track to graduation.

Bailey-Taylor has achieved the rank of second lieutenant, the highest spot an 11th grader can hold. He raises his hand for everything, from school to districtwide volunteer opportunities. He takes seriously his responsibilities — summer training, monitoring freshman cadets at lunch, mentoring them.

“Even if he had not earned this medal, he would still be a rare student,” said Gallagher.

The trauma of witnessing gun violence so intimately wore on Bailey-Taylor. He replayed what happened, and thought about how it might have ended differently.

“Too often, you hear about people my color and my age dying in Philadelphia because of gun violence,” said Bailey-Taylor. Coming back to PMA, on North 13th Street just off Temple’s campus, was a relief, he said. “Once I saw Col. Gallagher and [principal Kristian] Ali, I just broke down. I knew that I was safe, and I knew that they were going to make sure I was OK.”

And they have, said Bailey-Taylor, who often sidesteps talk about his heroism to highlight the staff and cadets who have supported him during his time at PMA.

In 30 years in education, Gallagher has never known a cadet who’s won the medal; he believes Bailey-Taylor is the first in Philadelphia to ever win the award, scheduled to be presented with Army officials from as far away as Fort Knox, Ky., in the audience.

Bailey-Taylor, who lives with his great-grandmother in Strawberry Mansion and wants to pursue ROTC in college with an eye toward an eventual career in Homeland Security, is proud of the attention he’s receiving. He’s grateful to be the spokesperson for a school and a program he has found enormously helpful.

The significance of the moment is not lost on Bailey-Taylor or the PMA staff, they said.