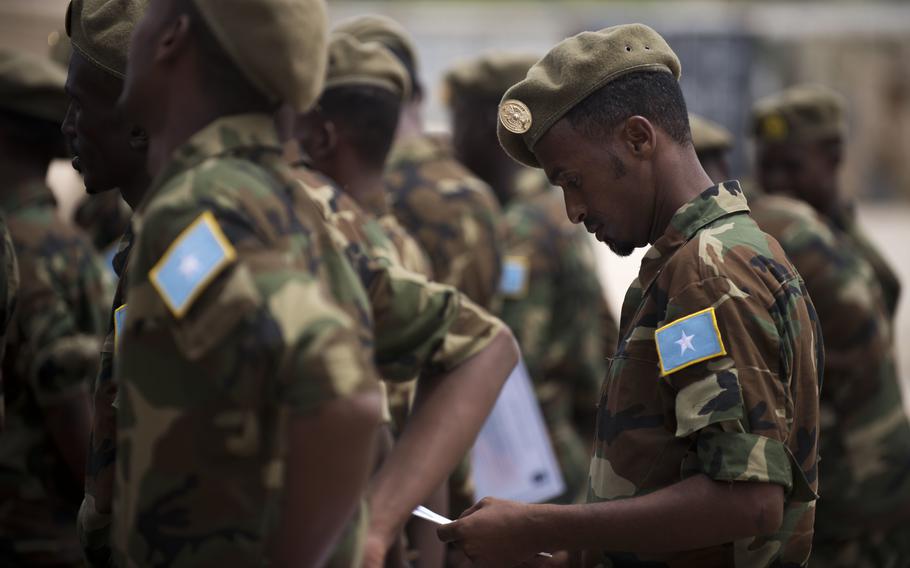 A Somali soldier stands in formation at a logistics course graduation ceremony Aug. 17, 2018, in Mogadishu, Somalia. A different Somali soldier attending the Defense Language Institute at Joint Base San Antonio ran off, forcing the U.S. Air Force to declare him AWOL, according to a recent Defense Department Inspector General report. (Evan Parker/U.S. Navy)

But he made it into the United States without the required background check, the Defense Department’s inspector general said in a new report. And his case wasn’t a fluke.

Foreign troops bound for study in the U.S. have slipped through the vetting cracks, according to the IG inquiry, which found that military offices don’t always follow regulations in clearing incoming personnel from abroad.

That failure could provide “unescorted access” to DOD facilities for people who seek to inflict harm on American service members or their families, according to the December report.

The IG also concluded in the case of the Somali soldier that proper vetting could have revealed indicators that would have stopped clearance for U.S. training in the first place.

Instead, he had to be declared AWOL after his arrival at the Defense Language Institute at Joint Base San Antonio, and the Department of Homeland Security was alerted.

The error occurred despite more stringent vetting rules, which were put in place after three U.S. sailors were killed by a Saudi air force member who was attending flight school at Naval Air Station Pensacola in Florida in 2019.

The IG found that two of the 59 were issued orders without being vetted. And DOD’s screening center did not complete on-time continuous reviews for 54 of 57 students reviewed.

The failure stemmed from a lack of procedures for communicating when the continuous reviews were due, the IG said.

And because follow-up reviews were not done on time, there was also an increased risk that DOD would not detect behavior indicating a student had been radicalized during their time in the U.S., the IG said.

In the case of the Somali soldier, the issue was a failure by U.S. defense security cooperation officials to have background checks completed before issuing a travel order, the IG said.

The reason: U.S. security cooperation personnel were concerned that the prospective student would miss his scheduled class because of the lengthy process for obtaining a U.S. visa, the IG said.

The IG report did not say what became of the Somali soldier or whether he had returned to his home country.

During its inquiry, the IG told defense officials that procedures were needed to ensure that orders could not be authorized until background checks were complete.

In October, the IG observed a demonstration of a new Defense Security Cooperation Agency system that allows officials to prevent the issuance of orders before vetting is completed. That system “was operating as intended,” the report said.