Gun parts found in a jar of Jif after man hid them in peanut butter, TSA says 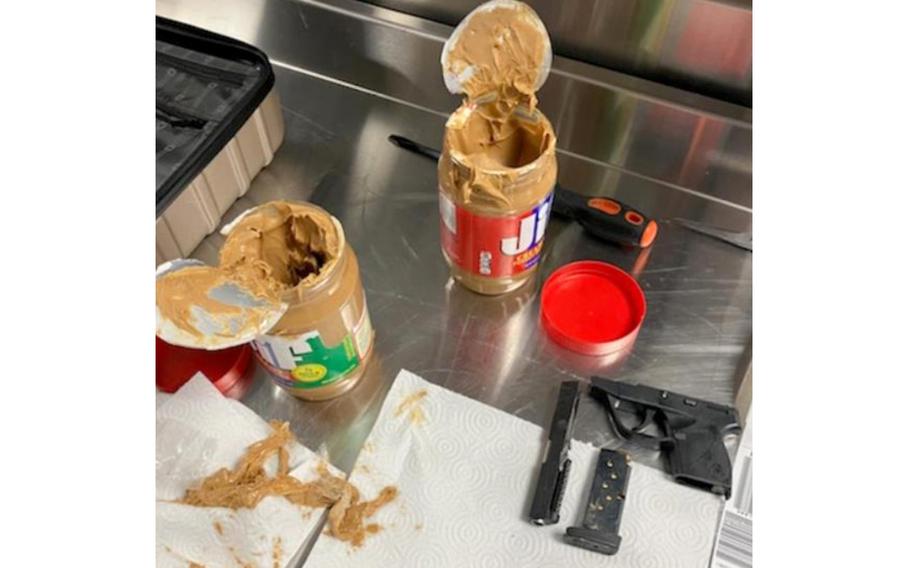 Gun parts hidden in peanut butter created a mess for Transportation Security Administration officers and the man whose luggage they were found in. (Photo courtesy of TSA)

The discovery at John F. Kennedy International Airport came Dec. 22, when a checked bag triggered an alarm during the screening process. A Transportation Security Administration officer removed two jars of Jif peanut butter from the luggage and found parts of a disassembled .22 caliber handgun — including a loaded magazine — wrapped in plastic and hidden inside, the agency said.

"The gun parts were artfully concealed in two smooth creamy jars of peanut butter, but there was certainly nothing smooth about the way the man went about trying to smuggle his gun," John Essig, the TSA's federal security director for JFK Airport, said in a statement.

The TSA said it flagged Port Authority Police, which confiscated the gun parts from the Terminal 8 baggage screening room. Officers found the bag's owner, a Rhode Island man, in the terminal and arrested him. The man, whom the statement did not identify, faces a financial civil penalty of up to roughly $15,000 for trying to bring an undeclared weapon onto a flight, the TSA said.

The peanut-butter gun made the TSA's list of its top 10 unusual finds from 2022, an eclectic rundown that includes a gun in a raw chicken.

The Rhode Island man's arrest happened on one of most hectic travel days of the year, when 2.3 million people passed through TSA checkpoints and security officers were unusually busy. Holiday air travel was up slightly from 2021 and dramatically higher than in 2020, when the coronavirus pandemic caused many people to pump the brakes on taking mass transit.

The peanut butter incident also reflects a rise in undeclared guns found at security checkpoints last year. The TSA said it had intercepted 6,301 firearms as of Dec. 16, surpassing the previous annual record of 5,972 guns found in all of 2021. Nearly 90 percent of the firearms discovered last year were loaded.

To try to stem the surge, the TSA recently increased its maximum penalty for gun violations by roughly $1,000, to reach $14,950. The agency says it determines the fine in each case based on specific circumstances. If the person has TSA PreCheck, which enables passengers to opt into a less onerous security process, the TSA also revokes that status for at least five years.

Travelers are allowed to bring guns in their checked luggage if the firearms are unloaded, packed in a locked, hard-sided case, and declared at the relevant airline's check-in counter, according to the TSA. The same rules apply to replica guns. The TSA also advises travelers to check their airline's specific firearm policies and the laws on each side of their trip.