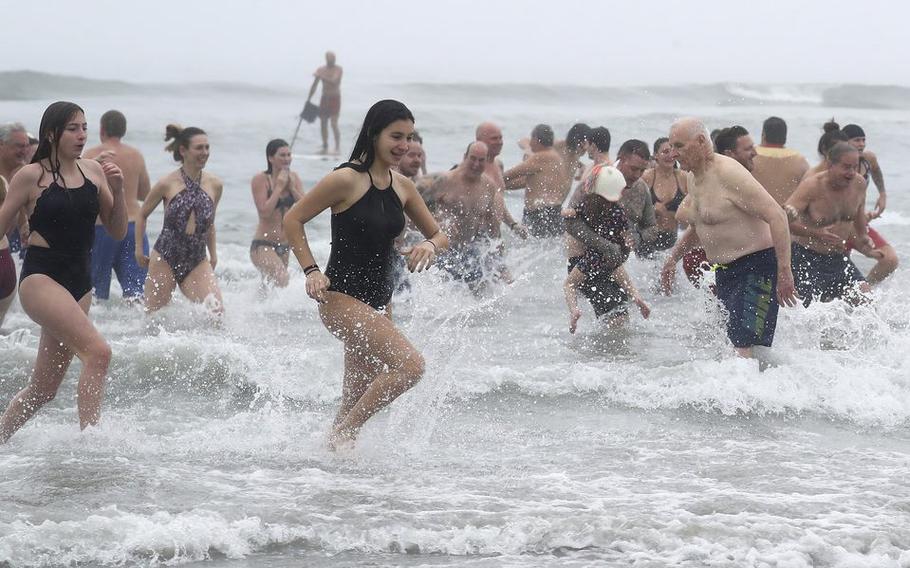 The three events, spread out over 90 miles, all have long histories, avid fans and serve as fundraisers for various charitable causes. They typically draw lots of spectators, including some who end up getting persuaded to take at least a brief dip in the ocean.

“What I tell everyone, even if they’ve never gone in or intimidated by the thought of it, is, wear your bathing suit under your clothes, because you’ll go in. You’ll get caught up in the energy of the crowd,” said Sean Clifford, an organizer of the Sons of Ireland plunge.

“It’s exhilarating, because everyone is screaming and hitting the water at the same time. It’s a total rush,” added Clifford, who has been taking a New Year’s Day ocean dip for 21 years.

Sons of Ireland moved its event from Asbury Park to Long Branch last year due to the ongoing closure of the auditorium at the Convention Hall. The actual polar plunge, which takes only a few minutes starting at 1 p.m., is part of a six-hour celebration — from 10 a.m. to 4 p.m. — that is being held at the Ocean Place Resort and Spa.

It is raising money for No Limits Cafe, a restaurant employing adults with intellectual disabilities, and Shore House, which provides support for those living with mental illnesses.

The Atlantic City Polar Bear Plunge, in its 31st year, features an after-party from 12 p.m. to 2 p.m. at the LandShark Bar & Grill located at Resorts Casino Hotel. The plunge is at noon. This year’s event is raising money for the Cancer Support Community New Jersey at Gilda’s Club.

Jessica Melville, an organizer, said about 60 plungers had signed up as Dec. 20, adding that most register either closer to or on the day of the event.

“We do get a great turnout, including people just to spectate,” Melville said.

In Brigantine, the polar bear plunge is being held for a 23rd year and is taking place at noon on Sunday. It includes a celebration, starting at 10 a.m., at the Laguna Grill & Rum Bar. Participants are raising money for the Fisher House Foundation, which benefits wounded members of the military and their families.

Tricia Cosgrove, an organizer, described the lead-up to the plunge, with participants waiting by the water and, in some cases, wearing only bathing suits.

“There’s so much energy and momentum, you don’t feel the cold. Then, you jump in the ocean for five seconds and come out. Then, you look for the person who’s got your robe,” Cosgrove said, laughing.

Cosgrove last did the plunge in 2012. She recalled making in past three waves, holding a U.S. flag.

“I’ve been running it for 10 years, but before that, I went in,” Cosgrove said.