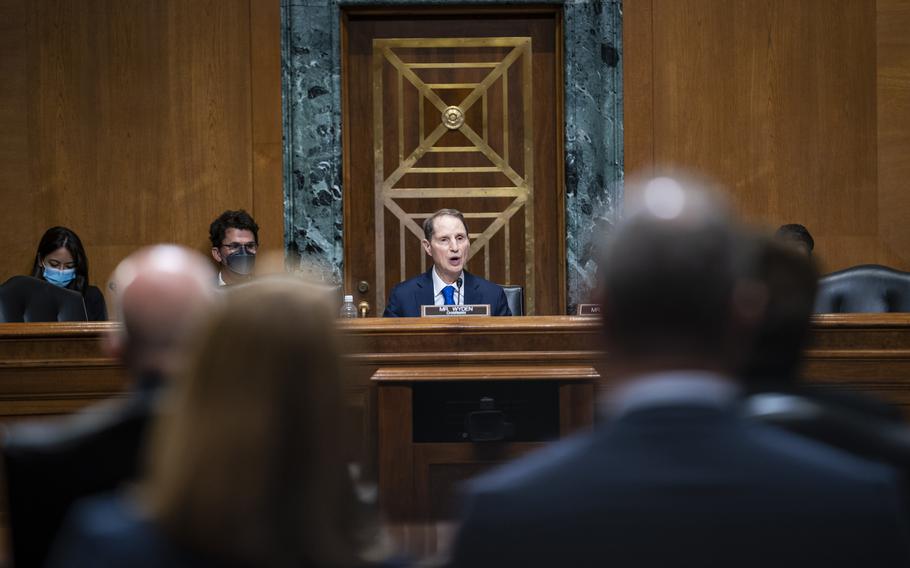 The Senate Finance Committee is preparing to launch a broad, bipartisan inquiry into the Social Security Administration's watchdog division, officials said, as lawmakers grow concerned that management failures are compromising its oversight mission.

The committee is likely to concentrate on allegations of retaliation against whistleblowers, plummeting morale, staff attrition, hiring decisions and a declining number of investigations into fraud in the massive disability benefits program, one of the inspector general's core missions, congressional aides said.

Social Security, an independent federal agency that has historically faced limited oversight from Congress, faces new scrutiny of its $200 billion disability program following several articles in The Washington Post. Senate Finance Committee investigators in both parties summoned senior attorneys on the staff of Inspector General Gail S. Ennis to a briefing earlier this month to learn more about the tumult inside her office, which includes some 500 auditors, criminal investigators and attorneys, several participants said.

"The committee has grown increasingly concerned about the performance of the Social Security Inspector General's office over the past year, especially allegations of whistleblower retaliation," Taylor Harvey, a spokesman for committee Chairman Ron Wyden (D-Ore.), said in an email. "Chairman Wyden will continue working to ensure the office is able to perform its critical watchdog role in the months ahead."

A spokeswoman for Ennis' office declined to comment on the emerging inquiry. The spokeswoman, who spoke on the condition of anonymity, wrote in an email that while the number of investigations declined during the pandemic as field work thinned, "our investigative performance since then has returned to pre-pandemic levels." She said the office commits resources to "education, prevention, and deterrence," as well as to fighting Social Security-related government impostor scams and fraud in coronavirus aid programs.

The Post has reported that Ennis's office levied unprecedented penalties against more than 100 disabled claimants, then sidelined two senior officials who exposed the practice, they said. The Post reported that Social Security is struggling to provide basic customer service to disabled claimants following prolonged pandemic closures - and described the forces that led to a backlog of more than 1 million pending disability claims in the state offices that adjudicate initial applications for benefits. In addition, The Post found that Social Security relies on a list of obsolete jobs to deny thousands of claims each year.And The Post disclosed that a senior leader overseeing 9,000 employees in the disability system was found by investigators to be routinely impaired on the job.

Social Security officials told Senate Finance Committee staff at a separate briefing this month that they expect an investigation into the fines that was prompted by The Post's report to be completed by mid-2023, according to aides familiar with the discussion. The probe is a comprehensive look at the Civil Monetary Penalty program, including its origins and effectiveness.

Following The Post's reporting on the backlog in state offices, acting Social Security commissioner Kilolo Kijakazi sent letters to governors in every state urging them to request salary increases for their disability examiners where needed, hire new examiners into positions the agency authorized and consider telework as a strategy to improve retention and recruitment.

"Your state's [office of Disability Determination Services] is critically understaffed, which risks your constituents not receiving the timely service they deserve," Kijakazi wrote to Alaska Gov. Mike Dunleavy (R) on Dec. 13, according to a letter Social Security officials shared with The Post on Thursday. "Please consider what you can do to ensure we can timely make decisions for your residents."

Meanwhile, key stakeholders have pushed for reforms by calling on Social Security and Congress to change several policies they argue have contributed to the delays.

"I think of it as a call for action," Jacki Russell, director of Disability Determination Services in North Carolina and president of the National Council of Disability Determination Directors, said of proposals she is making to streamline hiring practices and the claims adjudication process. "This is a bipartisan issue that everybody in Congress needs to pay attention to," Russell added. "We need to improve how we're serving people who are at their most vulnerable stage in life."

Facing a historic labor shortage, including of physicians who sign off on disability claims, Russell is seeking a change to federal law that would allow experienced, specially trained disability examiners to make final decisions. She said her group also wants all directors nationwide, who are funded by Social Security, to report to a senior official at the agency who in turn reports directly to Kijakazi, removing a layer of management that she argues weakens the states' clout. The organization wants a faster process for background checks on new hires, which now stretch as long as eight to 12 weeks and can lead recruits to quit before they even start.

In addition, Russell said she is asking Social Security to simplify a step in the claims evaluation that requires an assessment of whether a claimant's previous job skills can transfer to a new occupation. Currently, claim reviewers must track down an applicant's 15-year work history; Russell proposes reducing the period to five years. "The process has become too complex and challenging, and it has to be simplified," she said.

Jeff Nesbit, a Social Security spokesman, said in an email Thursday that "while all federal agencies, and each [state disability determination office], follow government-wide rules for background checks and onboarding new hires, we have engaged with state directors and across government to discuss ways to improve the hiring and onboarding process." 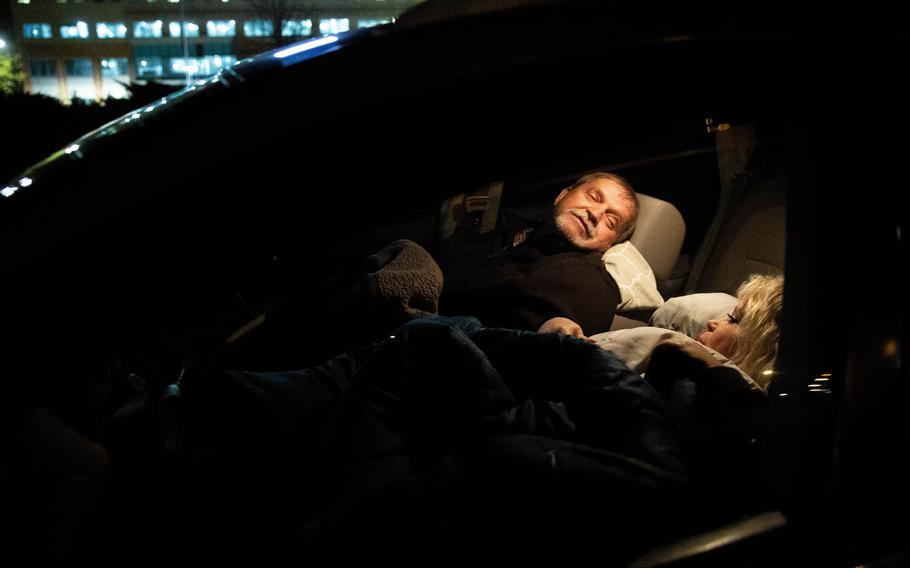 Dale Pearson and Sandra-Kay Pearson rest in their car outside of a hospital in Knoxville, Tenn., on Nov. 17. (Jessica Tezak/The Washington Post)

The Post report on the backlog highlighted the case of Sandra-Kay Pearson, 59, a former phlebotomist in Greenville, S.C., who is living with her disabled husband out of their car as they await a second ruling on her request for disability benefits, filed 15 months ago.

Following the article's publication, Social Security notified Pearson's lawyer that she won her appeal and will start receiving monthly checks in late January. "I'm just thankful and grateful I got approved," Pearson said. "If the offices are this far behind, I thought I wasn't going to hear anything until Christmas of next year." The couple is still living in their car and waiting to learn if their application to rent a subsidized apartment is accepted, she said.

Also following The Post's report, the Florida Division of Disability Determination has shown interest in the claim of a Tampa man whose collision with an I-beam on a construction site left him with severe neck and back injuries.

Rusty Swain, 59, has been living in a small trailer as he waits for a ruling on his claim, pending for 14 months. While the case still has no resolution, David Wright, chief executive of the disability firm representing Swain, said the state office has made several contacts with the firm to inquire about his work history and schedule a medical examination. "The frequency is heating up, which means it's being worked on," Wright said. "We hope a decision is imminent."

Oversight of the disability benefits program is one of the central missions of the Social Security inspector general's office. But since Ennis took office in January 2019 as a Trump appointee, there has been a decline in audits of Social Security operations as well as in the disability fraud cases pursued by criminal investigators, according to interviews and semiannual reports to Congress.

The decrease follows an exodus of dozens of investigators, who retired or quit in the last two years, according to audits and interviews. As Ennis's staff worked from home at the height of the pandemic, she began monitoring investigators' computer logs and telephone records to see how productive they were, multiple officials in the inspector general's office said. She then proposed discipline or termination for several agents who, with their supervisors, said they were working on cases even if they were not at their computers.

Ennis defended the monitoring to her staff as a legitimate effort to hold them accountable to taxpayers, people familiar with her communications said. But the episode was widely criticized internally and led to a no-confidence vote from the Federal Law Enforcement Officers Association.

An audit of the office's workforce planning strategy - released by the Office of Personnel Management to Ennis and her senior staff last April and obtained by The Post - raised alarms about staff departures. "Attrition data indicates that voluntary turnover is an increasing problem for OIG," auditors wrote.

The report noted that as criminal investigators left, the office's hiring strategy took an unusual turn: Attorneys were brought in to replace many of them. The hiring of lawyers, some of whom are staffing a newly created personnel division devoted to monitoring employee misconduct, "has caused several negative effects including a perception that there is less transparency in the leadership selection process, concern and skepticism that career progression is only possible by being an attorney, and concern that attorneys do not possess the necessary technical knowledge on investigations to sufficiently guide the work," auditors wrote.

The Office of Personnel Management is conducting another audit digging deeper into Ennis's hiring practices. Her spokeswoman called it a "human capital management evaluation" that is "part of OPM's normal statutory oversight responsibilities" and said the office "is fully engaged" with the evaluation.

Ennis's office came in last of 432 federal departments in the most recent survey of the best places to work in the federal government.

"In her relatively short time in office, Ennis managed to turn the once number one federal watchdog office into the worst place to work in government," said Joscelyn Funnié, a senior executive on the inspector general's staff who was removed from her job in late 2019, then fired after she and a colleague, senior attorney Deborah Shaw, pressed Ennis and her deputies to have the penalties imposed on disabled claimants reexamined and lowered. "The declining return on investment and shocking attrition rate substantiate this reality."

Funnié returned to work last December after appealing her firing to the independent Merit Systems Protection Board and settling her case with Ennis and her staff. Following The Post's reporting on what she described as continuing retaliation, Funnié was promoted this fall to assistant inspector general for workforce performance and development, overseeing training, professional development and diversity and inclusion policies.

The women were among the officials who met with the Senate Finance Committee this month.

"A bipartisan investigation is imperative," said Shaw, who was returned to work in early 2020 after just over three months on paid leave but lost the staff she supervised and continues to face a 45-day unpaid suspension that Ennis' deputies had proposed when she was placed on leave. "Our mission has been sidelined. Investigations and audits have plummeted. Precious resources have been diverted to hiring employment attorneys who target employees who speak out with abusive tactics and false accusations."

In coming weeks, the committee is expected to speak with others in Ennis's office, officials said.