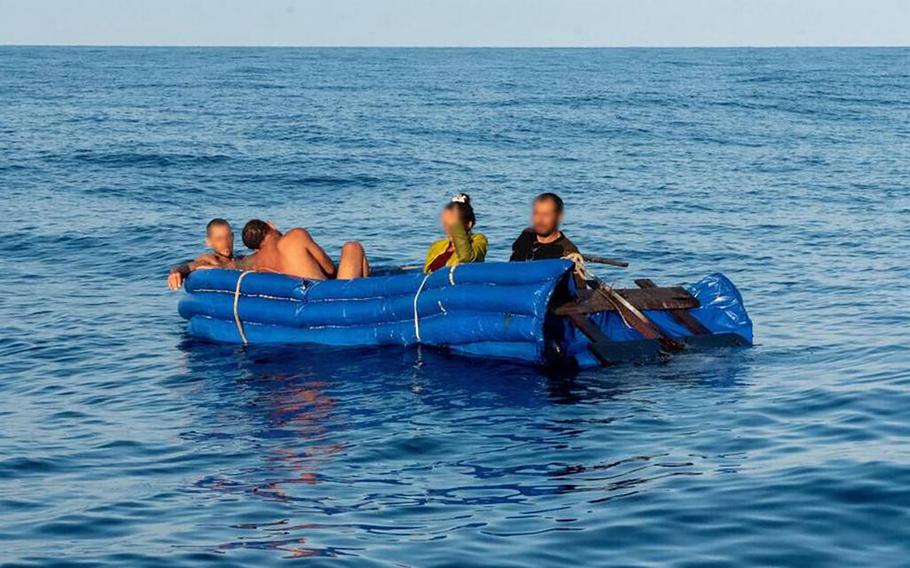 Four people sit on a makeshift migrant raft floating off Big Pine Key Dec. 21, 2022. Similar vessels are a common sight off the Florida Keys, which is the end point in the largest maritime exodus form Cuba in almost 10 years. The Coast Guard stopped a migrant boat with about 20 people on board Wednesday, Dec. 28, 2022. (U.S. Coast Guard/TNS)

(Tribune News Service) — U.S. Coast Guard crews and agents with Customs and Border Protection stopped a migrant boat off the Florida Keys Wednesday afternoon with about 20 people on board.

The Coast Guard declined to comment on the nationality of the migrants, but initial reports were that their boat was a “chug,” or the type of makeshift vessel Cuban migrants often use to make the dangerous journey across the Florida Straits.

The boats range widely in degree of seaworthiness — some made with sturdy materials like welded-together steel and fuel drums, and others, like one stopped off Big Pine Key Dec. 21, made from hastily tied-together rubber tubing and wood.

The people on the boat will likely be placed on a Coast Guard cutter and returned to their country of origin, he said.

South Florida, especially the Keys, is at the receiving end of the largest maritime exodus from Cuba in nearly a decade. Since the beginning of October, the start of the fiscal year, the Coast Guard has stopped more than 3,840 people at sea from Cuba attempting to reach the U.S., the agency said this week.

At this rate, maritime interceptions will almost triple last fiscal year’s number of 6,182 people, which was already the highest in eight years.