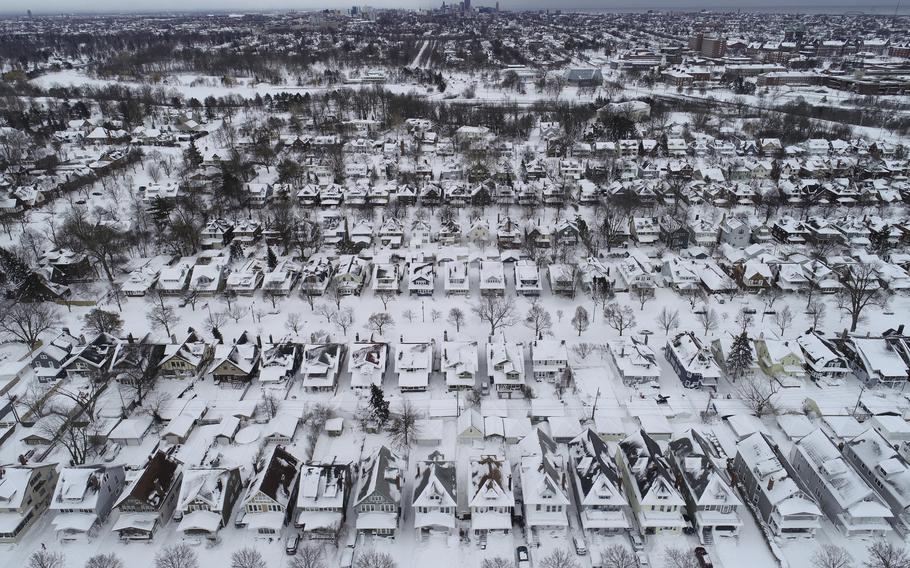 An aerial view of the 1901 Pan-American Exposition neighborhood in Buffalo, N.Y., which remains coated in a blanket of snow after a blizzard, Tuesday, Dec. 27, 2022. State and military police were sent Tuesday to keep people off Buffalo’s snow-choked roads, and officials kept counting fatalities three days after western New York’s deadliest storm in at least two generations. (Derek Gee, Buffalo News via AP)

Even as suburban roads and most major highways in the area reopened, Erie County Executive Mark Poloncarz warned that police would be stationed at entrances to Buffalo and at major intersections because some drivers were flouting a ban on driving within New York's second-most populous city.

More than 30 people are reported to have died in the region, officials said, including seven storm-related deaths announced Tuesday by Buffalo Mayor Byron Brown's office. The toll surpasses that of the historic Blizzard of 1977, blamed for killing as many as 29 people in an area known for harsh winter weather.

Greg Monett turned to social media to beg for help shoveling a 6-foot (1.8-meter) pile of snow from the end of his Buffalo driveway so he could get dialysis treatment Tuesday.

"This has been a nightmare," he said in an interview Monday. Power had been out for a time at his family's home, he said, so relatives ran a gas stove to keep warm, a practice he acknowledged was dangerous.

His loved ones called 911 when his blood sugar dipped dangerously low and he nearly passed out Sunday night, but they were told it would take hours to get to the home, Monett said. He eventually recovered on his own.

Officials have said at news briefings that it was impossible to respond to emergency calls at the time.

Monett ultimately made it to dialysis after climbing through the snow and having neighbors help dig out his buried vehicle, sister Maria Monett said.

A Facebook group originally created in 2014, when Buffalo was buried under deep snow, has become a lifeline, seeking to help thousands seeking food, medicine, shelter and rescue in the latest storm. Currently managed by five women, the group swelled to at least 68,000 people as of Tuesday.

"We are seeing a lot of desperation," said Erin Aquilinia, founder of the original group, in an online interview.

The National Weather Service predicted that as much as 2 inches more snow could fall Tuesday in Erie County, which includes Buffalo and its 275,000 residents. County Emergency Services Commissioner Dan Neaverth Jr. said officials also were somewhat concerned about possible flooding later in the week when milder weather begins melting the snow.

The rest of the United States also was reeling with at least an additional two dozen storm deaths reported elsewhere around the country, and power outages in communities from Maine to Washington state.

On the Rosebud Sioux Tribe's reservation in South Dakota, snowmobiles were dispatched Tuesday to reach residents after food boxes were delivered by helicopter and trucks over the weekend, the tribe said. Ohio officials assessed water damage in the Statehouse after a pipe burst amid the freezing weather.

Even in central Florida, temperatures plunged as low as 27 degrees (minus 2.7 Celsius) over the weekend. Growers' groups were relieved Tuesday not to find widespread damage to the fruit and vegetable crops that supply much of the U.S. with fresh winter produce.

In Buffalo, the dead were found in cars, homes and snowbanks. Some perished while shoveling snow, others when emergency crews could not respond in time to medical crises. Poloncarz, a Democrat, called the blizzard "the worst storm probably in our lifetime," even for an area known for heavy snow. More bodies are expected to be found as the snow is cleared or melts.

The winter blast stranded some people in cars for days, shuttered the city's airport and left some residents shivering without heat. More than 4,000 homes and businesses were still without power late Tuesday morning.

President Joe Biden offered federal assistance Monday to New York, allowing for reimbursement of some storm-relief efforts. Gov. Kathy Hochul toured the aftermath in Buffalo, her hometown, and called the blizzard "one for the ages." Almost every fire truck in the city became stranded Saturday, she said.

Hochul, a Democrat, noted the storm came a little over a month after the region was inundated with another historic snowfall. Between the two storms, snowfall totals are not far off from the 95.4 inches (242 centimeters) the area normally sees in an entire winter season.

The National Weather Service said the snow total at the Buffalo Niagara International Airport stood at 49.2 inches at 10 a.m. Monday. Officials said the airport will be shut through Wednesday morning.

Roughly 3,000 domestic and international U.S. flights were canceled Tuesday as of about 2 p.m. Eastern time, according to the tracking site FlightAware.

The U.S. Department of Transportation said it will look into Southwest Airlines flight cancellations that left travelers stranded at airports across the country amid the winter storm. Many airlines were forced to call off flights, but Southwest was by far the leader.