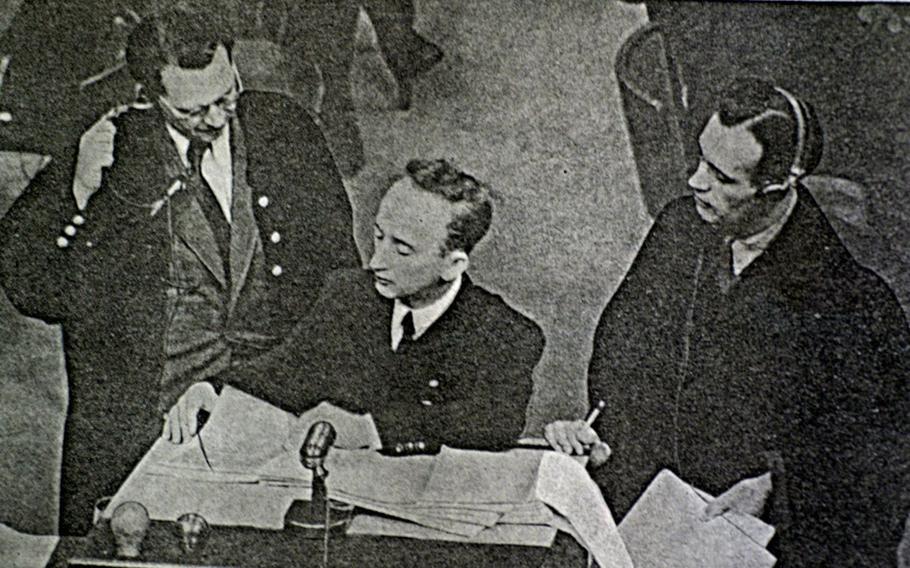 Benjamin Ferencz (center), serving as chief prosecutor at the Nuremberg Trials in 1947. He helped convict 22 members of the Nazi SS for the executions of 1 million people during the war. (Sun Sentinel/TNS)

(Tribune News Service) — Congress has signed off on the Congressional Gold Medal for the chief prosecutor in what was regarded as “the biggest murder trial in history.”

South Floridian Benjamin Ferencz was 27 in 1948 when he had secured enough evidence to prosecute 22 members of Nazi killing squads responsible for the deaths of more than one million Jewish, Roma, Soviet, and others in shooting massacres in occupied Soviet territory.

“Mr. Ferencz is a hero of the Jewish community who has dedicated decades of his life to combatting antisemitism, prosecuting those who act on their hatred, and keeping the lessons of the Holocaust alive,” said U.S. Rep. Lois Frankel, a Democrat who represents most of Palm Beach County and co-led the bipartisan effort. “It is a privilege to recognize his remarkable, lifelong commitment to justice, peace, and human dignity with the Congressional Gold Medal — Congress’s highest expression of honor.”

The award was included in the $1.66 trillion government funding bill that provides assistance for victims of natural disasters, funding for those struggling with drug addiction, and sends emergency aid to Ukraine, approved hours before a midnight deadline Friday to avoid a partial shutdown of federal agencies.

The funding bill passed the U.S. Senate on Thursday. Now that it has been approved by the House, the bill goes to President Joe Biden.

“I will sign it into law as soon as it reaches my desk,” Biden said in a statement Friday.

Ferencz was born on March 11, 1920, in Transylvania, in what is now Hungary. That same year his family fled to “Hell’s Kitchen” on Manhattan’s Lower East Side to avoid the persecution of Hungarian Jews by Romania.

“The neighborhood was known for having one of the highest crime rates in America. I decided early on that if my choices were to either be a crook or be a lawyer, I would choose law,” he once said in a newspaper interview.

In 1940 he received a scholarship to Harvard Law School. With the onset of World War II, he enlisted in the United States Army in 1943, eventually transferring to a newly created War Crimes Branch of the Army to gather evidence that could be used in court.

Ferencz documented Nazi Germany’s crimes, and visited concentration camps as they were liberated.

In 1946, the United States government recruited him to work on the Nuremberg tribunals.

In his role as a war crimes investigator, Ferencz visited concentration camps as they were liberated to gather evidence of atrocities carried out by the Nazis. They kept death registries and Ferencz was assigned to collect these registries which contained victims’ names.

He became the Chief Prosecutor at Nuremberg’s Einsatzgruppen Trial, where he tried Nazi defendants for perpetrating the worst crimes against humanity. Einsatzgruppen was the ninth of 12 trials held by the U.S. government in occupied Germany.

“The defendants were commanders and officers of special SS groups known as Einsatzgruppen-established for the specific purpose of massacring human beings because they were Jews, or because they were for some other reason regarded as inferior peoples,” he said in his opening remarks presented before the trial.

The court found 20 defendants guilty of war crimes and crimes against humanity and two guilty of a lesser charge. Fourteen defendants were sentenced to death, more than in any other of the Nuremberg proceedings.

In the decades since the Nuremberg Trials, Ferencz has dedicated his life to ending war and promoting justice.

“I fought for compensation for victims and survivors of the Holocaust, the return of stolen assets, and other forms of restitution for those who had suffered at the hands of the Nazis,” he said in a newspaper interview earlier this year.

And since the 1970s, he contributed to the establishment of the International Criminal Court and to the recognition of aggression as an international crime.

In April, right after his 102nd birthday, in an interview with the Florida Jewish Journal, Ferencz said when he publicly presents his life story, he always tells his audience, “There are three important lessons I wish to transmit: One, never give up, Two, never give up, and three, never give up.”

Images the Delray Beach resident saw during the Holocaust are still vivid, he told the newspaper.

“Camps like Buchenwald, Mauthausen, and Dachau are vividly imprinted in my mind’s eye. Even today, when I close my eyes, I witness a deadly vision I can never forget,” he said.

He was honored by Palm Beach County commissioners last year, who declared Nov. 5, 2021, as “Benjamin Ferencz Law Not War Day,” a shout-out to his motto of Ben expressed his motto: “Law. Not War.”

And in April, Gov. Ron DeSantis awarded him the governor’s medal of freedom.