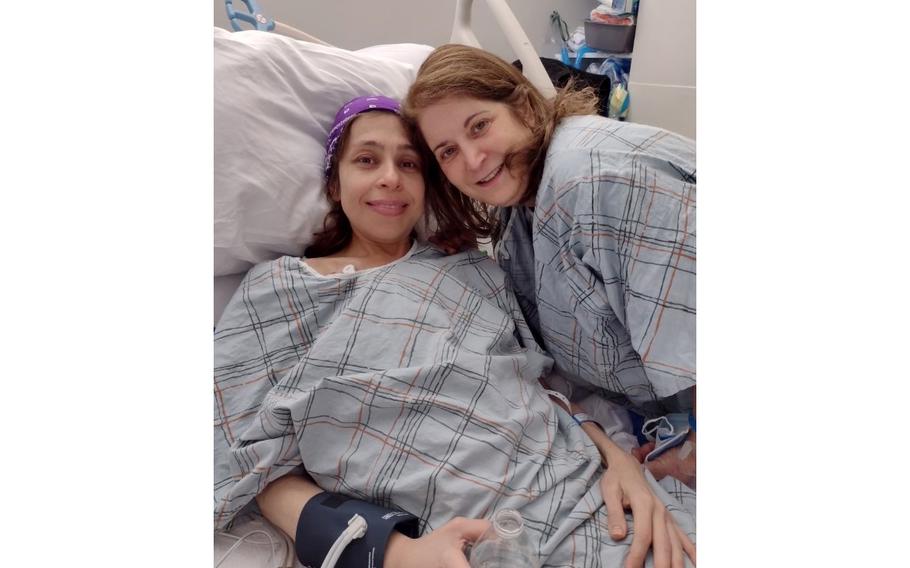 Marianna Ilyasova of New York, left, after she received a kidney from Liza Porat, of Silver Spring, Md. (Chaya Lipschutz)

Liza Porat glanced at her phone while sitting in her car at a stoplight and saw the request posted on an internet mailing list for her Silver Spring neighborhood. “Needed,” it read, “A kidney for a 41-year-old New York woman.”

Porat, a 57-year-old mother of five and lawyer, drove on, and at the next stoplight, she quickly responded: Sure, she’d be willing to go through dozens of tests and procedures, travel, put her work on hold — at times — and see if she was a match.

So began her months-long process to donate a kidney to a stranger with the help of Chaya Lipschutz, who runs a website called KidneyMitzvah. Despite the Jewish reference in her website, Lipschutz says she helps people of all races and religions. From her apartment in Brooklyn, Lipschutz — a 65-year-old former secretary for a nonprofit — posts notices for kidney and liver patients in need of new organs and success stories of donors who’ve given.

She started her work in 2005 after she donated a kidney to a stranger. With no staff and no budget, Lipschutz uses internet mailing lists and online groups to match donors and recipients. She’s helped about 70 people navigate the donor and recipient process.

“People ask, ‘Can I give you a gift?’” Lipschutz said when she’s able to help donors and recipients. “I say, ‘No, no, no.’ When a match goes through, that’s my reward. This is the greatest happiness in the world.”

While there are many organizations and people who try to help link organ donors and recipients, those who’ve worked with Lipschutz said she’s unique: She charges no fees and brings a lot of energy and a caring spirit.

“She’s enthusiastic, and she puts her heart into everything she does,” said Marian Charlton, a clinical manager for a kidney transplant center in New Jersey who’s worked with Lipschutz. “She approaches everything 100 percent, full on.”

Stuart M. Greenstein, a kidney transplant surgeon at Montefiore Medical Center in the Bronx, said Lipschutz is “truly passionate” about working with recipients and donors.

“She’s helping other people and not making any money off it,” Greenstein said. “She does it purely because she wants to help.”

Ilyasova, a college professor who also has a tax service business, had been suffering with kidney failure for five years and was doing dialysis several times a week. At one point, her health had deteriorated so much that she could hardly urinate.

She’d heard about Lipschutz through a friend and asked her to post a message she had written: “I’m crying day & night & praying to God for him to show me what a day looks like by feeling healthy. I have lost all my strength & can’t even walk without aid.”

She continued, describing multiple health complications from her kidney failure. “Dialysis sucks out all nutrients & minerals from the body,” she wrote. “Every day, getting more critical. I don’t want to die! Please help me!”

Porat read the message. It was her birthday, and her closest childhood friend had recently received a new kidney. Porat said she planned to make a donation to a local kosher food bank in honor of her own birthday and in gratitude for her friend’s transplant. But when she read Ilyasova’s plea, she thought, “I can’t overlook this.”

She and Ilyasova went through months of testing to see if they were a match. They underwent transplant surgery in October. After the procedure, they met in person for the first time at the hospital, and Ilyasova cried.

“She saved my life. I thought I was going to die. I was trying to look for a donor and hanging on to the thought that I want to someday be married, become a mom and see my children,” Ilyasova said. “She helped me save that dream. She’s my angel on Earth.”

They’re both doing well after the surgery.

Porat hopes her tale will encourage others to become kidney donors.

“If I have it in my power to save a life, how do you turn away?” she said. “I couldn’t do that. She’s someone’s kid. ... She’s a woman, and she’s a member of the Jewish community, and we’re supposed to look out for each other.”