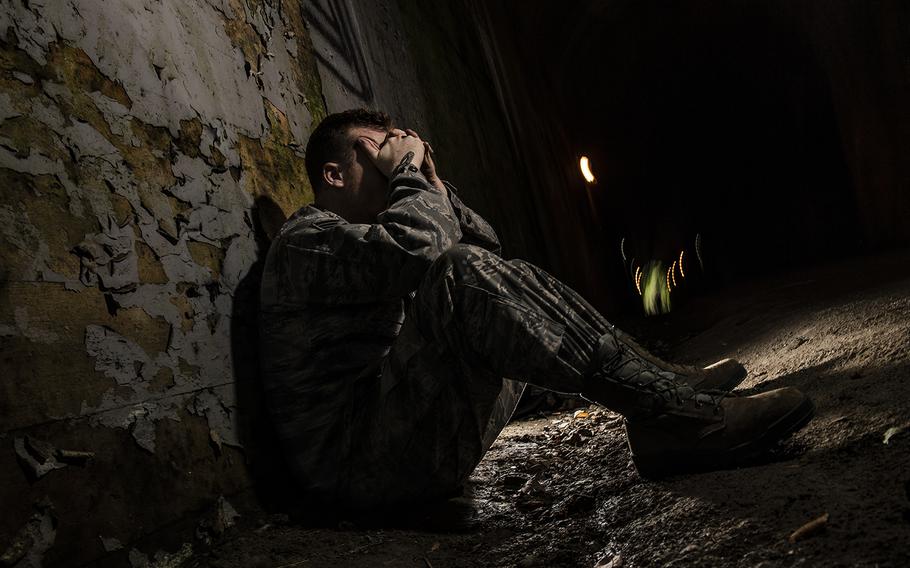 An Air Force photo illustration depicts a person who may benefit from a variety of military community resources to assist individuals in need of mental health programs geared toward suicide prevention and increasing resiliency. (Joshua Seybert/U.S. Air Force )

ASHTABULA, Ohio (Tribune News Service) — The holiday season can be especially challenging for those facing the emotional and mental challenges stemming from life in the military.

Luke Sawicki, of Ashtabula, has taken military suicide to heart after experiencing his own experience with a “mis-fire” in Ashtabula after decades of search and rescue missions for the U.S. Navy.

Sawicki served in the U.S. Navy from 1984 to 2005 and was involved in 137 search and recover missions with only four being alive, he said. “I was in the Persian Gulf during Desert Storm,” he said.

Some of the missions involved major issues on ships. “I was assigned to eight (different ships),” he said of his varied work over his career.

After finding help after his attempted suicide Sawicki has made the mission to help others a priority. He said the holiday season is the most difficult time of the year for people dealing with thoughts of suicide and it is important for family and friends to reach out to veterans to make sure they are doing well.

Sawicki said he was a district commander for the Veterans of Foreign Wars in 2016 when he was challenged to wear a pair of military boots around his neck to help raise funds for those battling post traumatic stress order. He said he was not diagnosed with PTSD while in the military, but found significant help after 2011, including a support group and regular counseling.

Sawicki said reaching out to veterans is important in letting people know they are loved. He said the impact of suicide ripples through the community.

“The average suicide effects 135 people in your community,” he said.

The two military boots Sawicki carried to collect donations for military members struggling with thoughts of suicde has morphed into a large black boot.

“I carry the boot everywhere i go [for military events]. I have been to 18 states,” he said.

This past summer people donated $2,700 during a summer conference in the Midwest. Sawicki has somone count the money on-site and then donates it to local military-related hospitals or treatment centers in those areas.

He said the money raised helped fund 318 “diddy” bags for people who will seek treatment. Sawicki said anyone interested in donating can drop off items at a VFW Post.

Sawicki also enlisted the efforts of his son Tom, a Lakeside High School graduate, to create a video to reach out to those facing military challenges several years ago.

Another video may be made to increase the opportunities to help veterans. He aid he also has a chance to talk to people struggling with suicidal thoughts.

“That boot has given me a lot of opportunities to talk to young warriors,” he said.

Sawicki said people should watch loved ones for symptoms that could show danger signs.

“They don’t go out or want to do anything,” he said of one of the challenges of a depressed veteran.

The two groups of veterans saddled with the highest suicide roots are Vietnam veterans and young females, Sawicki said. He said a lot of veterans are “self medicating” with opiods.

“Christmas is the highest time for suicides,” he said.

Sawicki suggested knocking on a veteran’s door if he or she hasn’t been seen recently. He said providing a meal or taking he or she out to lunch could be a positive help in a veteran’s mental health.

The military treatment and awareness of combat-related mental challenges has changed over the years, Sawicki said. He said in his view World War II veterans were the Greatest Generation and sacrificed so much and kept most of their feelings to themselves.

The attitudes of the military changed over the years from a time when stress-related combat issues were ignored. “Just suck it up,” was a common theme for those dealing with mental health issues.

The Veterans Administration provides suicide prevention information for those in danger. Sawicki said he has carries cards to hand out to veterans with suicide hotline information and signs to watch for in the life of a veteran.

The 2020 suicide rate for veterans was 31.7 per 100,000, according to a 2022 report compiled by the Veterans Administration. The veterans suicide hotline is 988 for people seeking assistance.

Visit the Star Beacon at www.starbeacon.com