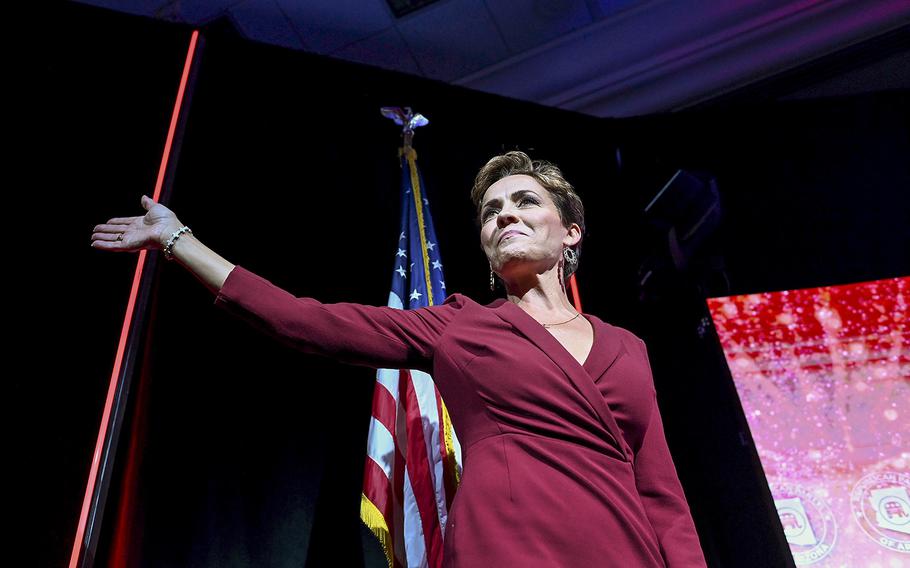 An Arizona judge on Saturday rebuffed an effort by Kari Lake, the defeated GOP candidate for governor in Arizona, to reverse the outcome of her November election, ruling against her after a two-day trial that showcased speculation about systematic malfeasance at the polls but failed to prove it.

The finding was in line with recent judgments against Abe Hamadeh and Mark Finchem, the unsuccessful candidates for attorney general and secretary of state, respectively, who also sought to challenge their losses. Taken together, the rulings show how the judiciary in Arizona, a state rife with distrust in the democratic process, rejected challenges to election results and affirmed the will of voters.

Lake, a former television news anchor and acolyte of former president Donald Trump, lost the Nov. 8 election by more than 17,000 votes. After making election denialism a centerpiece of her campaign, she refused to concede, even after the result was certified on Dec. 5. Days later, she sued her opponent, Democrat Katie Hobbs, as well as officials in Maricopa County, home to Phoenix and more than half the state's voters.

Lake's complaint, which asked that she be declared the winner, centered on problems with printers in Maricopa County. Those problems required some voters to wait in line, travel to another polling place or deposit their ballots in secure drawers for tabulation at a central location. County officials have said the problems resulted from insufficient printer heat settings. They also acknowledged at trial that "shrink-to-fit" settings at several voting locations caused ballots to be rejected, though they were all duplicated and ultimately counted. A deeper analysis is still underway, they testified.

A judge found on Election Day that the mechanical issues did not prevent anyone from voting. But in a 69-page filing, attorneys for Lake used a grab bag of unproven assertions and anecdotal accounts to argue that "hundreds of thousands of illegal ballots infected the election in Maricopa County."

The claims reached far beyond the administration of voting to include conspiratorial allegations about efforts to combat election misinformation, which the filing deemed an "unconstitutional government censorship operation," as well as evidence from the 2020 election.

The judge hearing Lake's case, Peter A. Thompson of Maricopa County Superior Court, earlier tossed most of her assertions but allowed arguments to proceed on two claims - that employees at Maricopa County's ballot contractor stuffed extra ballots into the system and that the printer problems on Election Day were intentional.

In Saturday's 10-page ruling, Thompson said the court "acknowledges the anger and frustration of voters" who were inconvenience by technical problems on Election Day.

"But this Court's duty is not solely to incline an ear to public outcry," he wrote. "It is to subject plaintiff's claims and defendants' actions to the light of the courtroom and scrutiny of the law."

There was not convincing evidence that printer problems in Maricopa County were intentional, Thompson concluded, or that ballots were mishandled in a way that would have affected the outcome of the election. In his ruling, he made note that lawyers for Maricopa County had indicated they would be pursuing sanctions against Lake's team and said such a motion must be filed by Monday morning.

Lake wrote on Twitter that she would appeal the ruling.

A lawyer for Hobbs, in urging the court to dismiss the lawsuit, said Lake's case represents what is "rotten in Arizona."

"For the past several years, our democracy and its basic guiding principles have been under sustained assault from candidates who just cannot or will not accept the fact that they lost," said the lawyer, Abha Khanna. "The judiciary has served as a bulwark against these efforts to undo our democratic system from within, and we ask this court to assume that role once again."

In a closing statement on Thursday, Khanna said, "Kari Lake lost this election and must lose this election contest. The reason she lost is not because of a printer error, not because of missing paperwork, not because the election was rigged against her, and certainly not for a lack of a full opportunity to prove her claims in a court of law."

"Kari Lake lost the election because, at the end of the day, she received fewer votes than Katie Hobbs," Khanna added.

Lake was represented in court by Kurt Olsen, a Washington-based lawyer involved in former president Donald Trump's efforts to reverse the outcome of the 2020 election. He was joined on her legal team by Bryan Blehm, an attorney who represented the cybersecurity firm Cyber Ninjas in its haphazard audit of Maricopa County's 2020 election results.

Olsen, in a closing statement, maintained, "The evidence shows that Kari Lake won this race."

But he backtracked immediately, saying, "At a minimum, we have put forth solid evidence that the outcome of this election is uncertain."

Olsen relied heavily on the testimony of Rich Baris, a conservative author and pollster who goes by the name "The People's Pundit" on Twitter. Baris told the court that interviews he had conducted with 813 residents in Maricopa County proved that the printer problems were to blame for Lake's loss. A defense witness, Kenneth Mayer, a professor of political science at the University of Wisconsin, Madison, called the theory "pure speculation."

Thompson took pains to allow Lake's attorneys to make their case, accommodating technical errors and the mislabeling of various exhibits. On Wednesday, he coached one of her attorneys to evade an objection by opposing counsel, saying, "I assume you're asking the witness to the extent of her knowledge." At another point, he said of the plaintiff's counsel, "I'll give him some leeway."

Lake's lawyers called numerous witnesses, including Clay Parikh, an Alabama-based IT expert who recently appeared at MyPillow founder Mike Lindell's "Moment of Truth" summit in Springfield, Mo.; Heather Honey of Haystack Investigations, a Pennsylvania firm tapped for the Arizona Senate's partisan audit of the 2020 election; and a technical support worker who said he observed chaotic conditions on Election Day.

Parikh maintained that problems with how ballots were printed could not have been unintentional but acknowledged under cross-examination that he never reviewed duplicates of the faulty ballots, all of which were ultimately tabulated. Honey argued that insufficient oversight of ballots allowed contractors to inject illegal ballots into the system but refused to say whether she had evidence that any illegal ballots were in fact inserted.

Maricopa County's directors of elections and the county recorder were among others who testified. Scott Jarrett, the county's co-director of elections, defended the contractor in the crosshairs, Runbeck Election Services, as "best in class."

Lake has used social media to promote her lawsuit and ask supporters to contribute to a nonprofit organization established on Dec. 5 called the Save Arizona Fund. A person close to her, speaking on the condition of anonymity to discuss internal details, said she has raised hundreds of thousands of dollars into the fund, which is being used to pay attorneys, among other costs.

Meanwhile, Lake has escalated her rhetoric in recent days, calling for the imprisonment of Maricopa County officials before a crowd gathered in Phoenix for a conference hosted by the pro-Trump youth group Turning Point USA.

"These people are crooks," she said. "They need to be locked up."

In a statement reacting to Saturday's ruling, Hobbs' campaign manager, Nicole DeMont, said: "We're pleased that the courts have upheld the will of the voters, and Governor-Elect Hobbs is continuing the work of preparing to take office as Arizona's next governor."