Why this blizzard could be the worst in Buffalo's history A vehicle bears the brunt of the vicious winter storm that Buffalo is dealing with. (Malik Rainey for The Washington Post)

Buffalo is experiencing a blizzard labeled by the National Weather Service as "life-threatening," "once in a generation," and "crippling," powerful statements from an agency known to often speak conservatively.

The blizzard is far from over. As the National Guard and first responders attempt to reach hundreds who are stranded, a blizzard warning remains in effect until Christmas morning.

It could very well end up being the worst storm in the city's history - not so much because of the amount of snow it is producing but because of the punishing combination of snow, extreme winds and bitter cold temperatures.

• Winds have gusted over 45 mph for more than 24 consecutive hours; blizzard criteria is three hours of 35 mph winds. Between 9 a.m. and 3 p.m. Friday, winds gusted over 60 mph every hour, including a 71 mph gust.

• About 28 inches of snow has fallen, with much higher drifts.

• Temperatures tumbled from 38 degrees at 6 a.m. Friday to 4 degrees at 4 a.m. Saturday. Wind chills have fallen as low as minus-21.

The Weather Service is predicting up to another 1 to 3 feet of snow through Sunday morning. 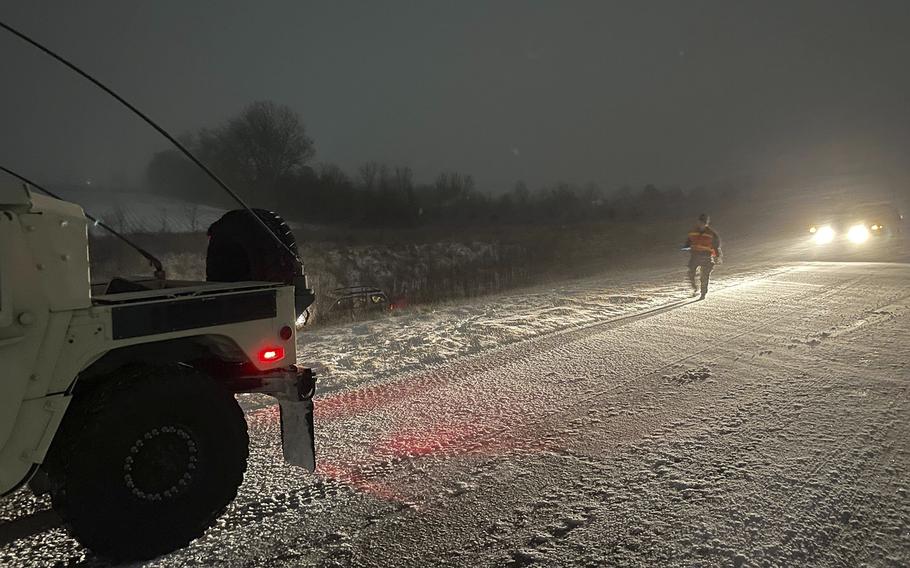 Guardsmen with the 338th Signal Company out of Elwood, helped a motorist who slid off the road on County Road 35 in Kokomo during Operation Snow Drift, on Thursday, Dec. 22, 2022. Hoosier service members across the state volunteered before the holidays to serve their communities during the blizzard. (U.S. Army National Guard photo by Sgt. Hector Tinoco) (Sgt. Hector Tinoco)

Don Paul, who was the chief meteorologist for Buffalo's CBS affiliate for 31 years and currently writes about the weather for Buffalo News, said he's seen nothing like it in his 38 years living in the area.

"The blizzard of 85 paralyzed the city, but this is the worst," he wrote in a text message. "That storm had gusts over 50. This one has had numerous gusts over 65 and some over 70. It's a monster."

The intensity of the current storm is tied to an exceptionally intense mid-latitude storm, or "bomb cyclone," that explosively intensified as it swept from Indiana into Ontario and Quebec between Thursday and Friday afternoons. The storm's pressure plummeted about 35 millibars in that time, well over the threshold for a meteorological bomb - 24 millibars in 24 hours. The lower the pressure, the stronger the storm.

Spiraling over eastern Canada, the storm has generated a massive wind field affecting much of the eastern United States with strong gusts and bitterly cold air. As the powerful winds have blown over the relatively warm waters of the Great Lakes, intense and very persistent lake-effect snow bands have developed.

"This may turn out to be the worst storm in our community's history, surpassing the famed blizzard of '77 for its ferocity," said Erie County Executive Mark Poloncarz at a Saturday morning news conference.

To understand why this blizzard is so severe and possibly worse than any other, we can compare it against some of Buffalo's mightiest winter storms of the past.

"That storm was almost entirely a ground blizzard, with only an estimated new 12 inches of snow on top of the vast amounts of powdery snow already deposited on frozen Lake Erie and the landscape," Paul said.

The stage for the storm was set by the coldest December and January in the area's history, with frequent arctic outbreaks that kept temperatures well below freezing for weeks. Lake Erie was completely frozen by the new year, and January 1977 was the third snowiest month in the city's history, with more than 90 inches falling. Much of that snow accumulated atop Lake Erie's ice-covered surface, where it remained fine and loose in the frigid air.

On the 28th of the month, though, a very powerful cold front crossed the Northeast. Ripping winds pulled arctic air eastward and, simultaneously, blew much of that powdery Erie snowpack off the lake and into the Buffalo area.

Little precipitation fell, but it did not matter. Winds gusted to 75 mph, temperatures fell below zero, and massive drifts of wind-swept snow accumulated in the streets.

The city was completely paralyzed - only navigable by snowmobile - for around four days, until the harsh wind and frigid conditions finally let up. By then, 29 people had died, mostly in cars stuck in the blowing snow.

Both 1977 and this event involved blizzard conditions that lasted for many hours, and visibility persistently stayed around zero. And, like in 1977, extreme cold and wind accompany the current blizzard, both of which could knock out power and prove deadly for anyone exposed to the elements.

Unlike the 1977 storm, Lake Erie was sufficiently ice-free for lake-effect snow to fall during the 1985 blizzard. Nearly 3 feet of snow accumulated in Buffalo amid 50 mph winds and below-zero temperatures.

Buffalo's resolve to avoid the disaster of 1977 led to a six-day travel ban, during which the mayor famously advised residents to: "Stay inside, grab a six-pack and watch a good football game." Conditions were reportedly worse than the 1977 storm, but the well-enforced driving ban precluded fatalities.

This storm may be more comparable to the current blizzard than the 1977 event. Large amounts of snow were falling, not just blowing, and conditions were similarly cold and windy. The 1985 storm was well-forecast like today's, as Buffalo had learned emergency management lessons from 1977.

Examples abound of famous 21st-century storms that paralyzed parts of the Buffalo area. The 2006 storm, which saw 2 feet of heavy, wet snow bring down trees and power lines, was one of the most destructive in city history; the 2014 and 2022 events involved as many as 6 feet of snow accumulating downwind of Lake Erie.

But none of these events were blizzards for Buffalo, as comparatively gentle winds accompanied the snow and less extreme temperatures. The 2014 and 2022 storms may have been voluminous - far more snow fell in the Buffalo area than likely will today - but the city is used to extreme snow accumulations and was able to return to normal relatively quickly.