A room with religious symbols on the wall is seen in July 2009 in an undisclosed location in the Middle East. (Sharon Singer/U.S Air Force)

Lt. Col. Shane Moore with the 186th Air Refueling Wing at Key Field Air National Guard Base, and NAS Meridian Chaplain, Commander Jon Settlemoir both agree that serving as chaplains has deepened their own faith.

Moore felt the call to the ministry during his time in the Air Force as a B-52 mechanic. He told his supervisor he felt led to become a minister and a pastor.

“I remember him telling me he hoped I made a better pastor than a mechanic,” Moore said. “I think the Lord used that time to give me a love for the Air Force and the airmen.

During his time as youth minister, Moore used the G.I. Bill to further his education, but the funds soon ran out.

“I was praying about how to finish paying for seminary when I was approached about re-enlisting as a chaplain,” Moore said. “I don’t recall seeing a whole lot of chaplains while I was an Air Force mechanic the first time around. I told the recruiter I didn’t know a lot about what chaplains did, but after researching it I thought it was a neat opportunity.

“At that time the Air Force was paying for seminary if you committed to becoming a chaplain. I prayed about it and I felt the Lord was opening that road for me.” Moore did a tour in Iraq, and on his last deployment to the Middle East, he was stationed in Qatar.

“I’ve been in combat a few times, especially in Iraq,” Moore said. “I was in Joint Base Balad, where it was nicknamed “Mortaritaville” because of a high frequency of incoming mortars, at times everyday, from Iraqi insurgents.”

“That was a scary time and I had to come to grips with it, and live out what I preach,” Moore said. “I preach and teach that God is sovereign, and when it’s your time, it’s your time. At the time we had a baby on the way and I was fearful to begin with. I had to trust God to get me home.

“I remember praying, “If it’s your will please get me home, Lord, if not, I will glorify you in the way I die. As we were running to a bunker in the middle of the night I remember one airman asking me if I was scared. I said, “Absolutely I am scared, but I know where I will be if I were to pass away, and that is the difference.”

Moore said chaplains bring calm in times of chaos, reminding those serving that they need to be strong physically, emotionally, mentally and spiritually.

“I think of it this way, you can have a four-legged table — that table can stand on three legs until you add weight to it,” Moore explained. “The military, life in general, marriage, and combat are the weight. Sure it will stand on three feet until that weight is added. You have to have four legs for weight to be added to the table otherwise it will fall. That’s what we try to do as chaplains — we really try to strengthen all four legs, but the leg we really capitalize on is the spiritual.”

Moore said for him the chaplaincy has been a great ministry, and is grateful to God for allowing him to be a part of it, especially being able to bring hope and healing during the holidays.

“I remember being away from family at Christmas,” Moore said. “One of the most special times I can remember was a candlelight service in the middle of nowhere. One of the members brought his guitar and we sat around singing Christmas carols, and I shared the Christmas story.

“There is a calm in the middle of chaos that Christ brings — it may be a stormy ride like the chaos of war, but he is in our boat.”

“I hope I am a better chaplain than I was a mechanic,” said Moore, who has been in the Chaplain Corp for 20 years. “It’s been a fun ride. I love wearing the uniform, and sharing the love of Jesus Christ. I love helping our Airmen strengthen that spiritual pillar that they will ultimately need in life.”

A need for spiritual guidance

Settlemoir said witnessing the strength of the young men and women in the military has deepened his faith tremendously.

“I am encouraged and motivated by their resiliency, and their ability to deal with some pretty harsh realities they have come up in,” Settlemoir said. “They have had to go through things people my age and older never had to experience.” 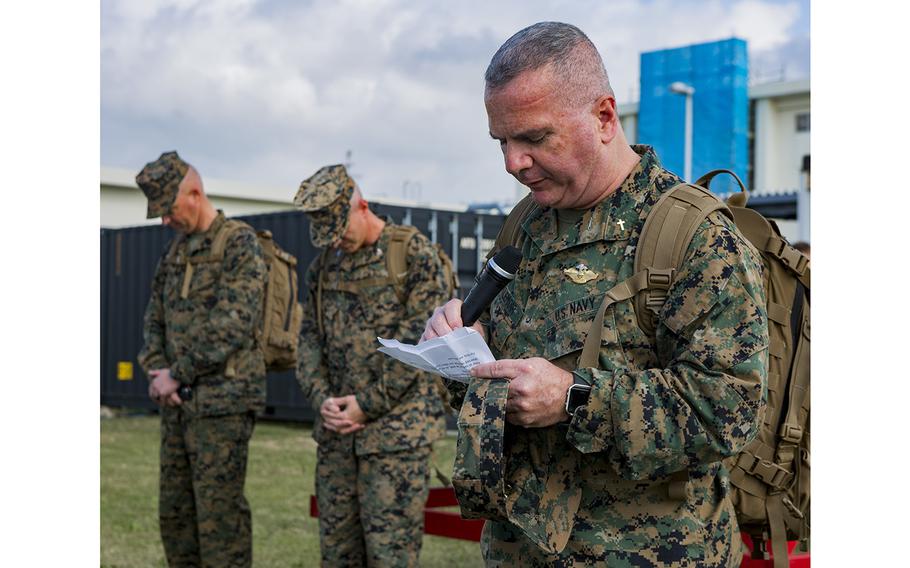 Settlemoir, who has been in the ministry since he was 18, was called into the chaplaincy during a prayer service. He has been at NAS Meridian for 10 years.

“I served in the Army during the first Gulf War and recognized the need there was for spiritual guidance and support for men and women in uniform,” he said. “After 9/11, I began looking for ways to serve the military, and in 2006 I joined the Navy as a chaplain after finishing my graduate program and earning a masters degree so that I was qualified to join.”

Settlemoir said one of the reasons he became a chaplain was to help families deal with the effects of deployment.

“I saw families hurting...getting divorced because of some of the issues,” he said. “A lot of programs the military had during that time helped people with the physical, emotional, and mental issues, but weren’t really helping them spiritually.

“That’s one of the reasons I decided to become a chaplain. Since then the Navy and other branches of the military have really taken steps to help people to get better spiritually, and strengthen their spiritual resolve. I’m really glad to have been part of the chaplaincy when that was beginning to be recognized and addressed.”

For anyone considering becoming a chaplain, Settlemoir says it is a great opportunity to share the love of God with a very diverse population.

“When I was a pastor, I spoke to my congregation, but in the chaplaincy I can have conversations and share the love of God with people of such a wide variety of backgrounds, traditions, and religious experiences. I am so grateful for that.”

Settlemoir’s duties at NAS Meridian include two Sunday services and counseling sessions with staff or students who may need help coping with specific issues in their life. One of those issues could include being away from family during the holidays.

“I let them know that wherever you are you can celebrate the Christmas holiday and season with the people who are around you at the time, and make new traditions,” Settlemoir said. “These are young men and women use to being at home during the holidays with their family. Now with a new career, they can create new holiday traditions with those around them.”

Visit The Meridian Star at meridianstar.com