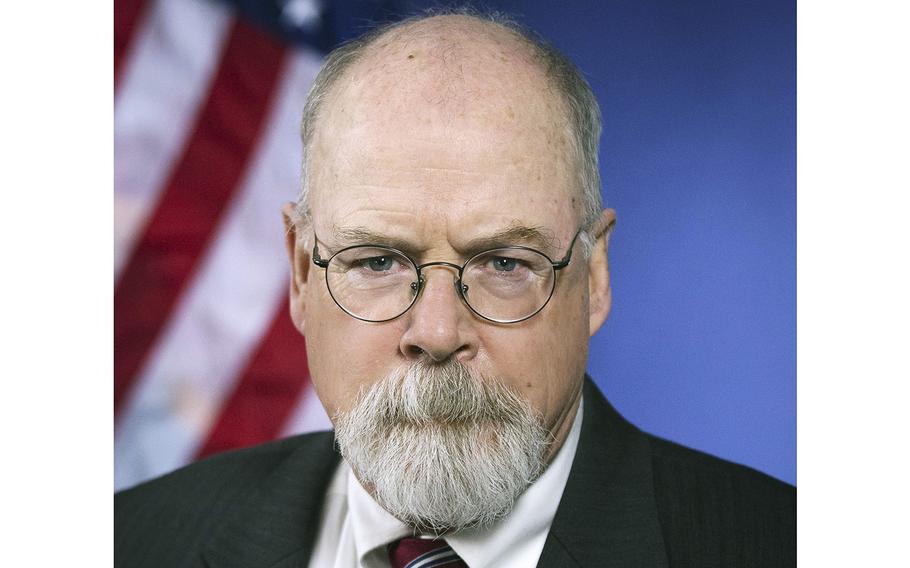 John Durham as seen in 2018 as Connecticut’s U.S. Attorney, has been serving as special counsel appointed to review the FBI’s investigation of the 2016 Trump campaign since Oct. 19, 2020. (Department of Justice)

The special counsel appointed to review the FBI's investigation of the 2016 Trump campaign has so far cost taxpayers more than $6.5 million, according to a Justice Department report released Friday.

Trump predicted at the time that Durham would uncover "the crime of the century" inside the U.S. law enforcement and intelligence agencies that conducted the investigation. But so far, two people charged by Durham have been acquitted at trial, while the third pleaded guilty to altering an email that one of his colleagues used in preparing an application to surreptitiously monitor former Trump campaign adviser Carter Page.

The special counsel's work appears to be winding down, but the Justice Department has not yet announced when it will end. A department spokesman declined to comment on Friday.

In November, Attorney General Merrick Garland appointed another special counsel - Jack Smith - to oversee the criminal probe of Trump's possible mishandling of classified documents at his Florida home and key aspects of the sprawling Jan. 6, 2021, case. No expense reports have been released in that probe.

Special counsels are independent prosecutors that attorneys general appoint to oversee high-profile investigations in "extraordinary circumstances" if they feel that their leadership could cause a conflict of interest.

The Justice Department has released incremental tallies of Durham's expenses throughout much of his 31/2-year review. The latest report released Friday shows that Durham spent nearly $2.1 million between April and September 2022. About half of the total during this period - more than $1 million - went to personnel costs, with the bulk of that paying Justice Department staffers detailed to the special counsel.

About $679,000 went to contractual services, which included about $392,000 for litigative support and $287,000 for IT services. The rest of the money paid for travel and office space costs.

The cost summaries do not represent Durham's full expenses since his probe began in the spring of 2019. Durham was the U.S. attorney in Connecticut when Barr first asked him to review the FBI investigation. At that time though, Durham was not appointed as a special counsel who was required to publicly report investigative expenses.

He was designated as a special counsel in October 2020. That appointment protected the investigation from any potential change in political leadership after the 2020 presidential election and required the submission of a final report that could be made public.

Durham's most recent trial concluded in October of this year, and the latest expense report covers a time period that ends in September, meaning at least one additional cost report should be forthcoming.

In that trial, a jury found Igor Danchenko - a private researcher who was a primary source for a 2016 dossier of allegations about Trump's ties to Russia - not guilty of lying to the FBI about where he got his information.

In May, a jury in D.C. federal court acquitted cybersecurity lawyer Michael Sussmann, who also was accused by the special counsel of lying to the FBI.

In 2021, a former FBI lawyer, Kevin Clinesmith, was sentenced to one year of probation after admitting he had altered a government email used to justify secret surveillance of Page. Clinesmith had worked in the FBI general counsel's office starting in 2015. He told a federal judge he doctored the message but thought at the time he was inserting truthful information.