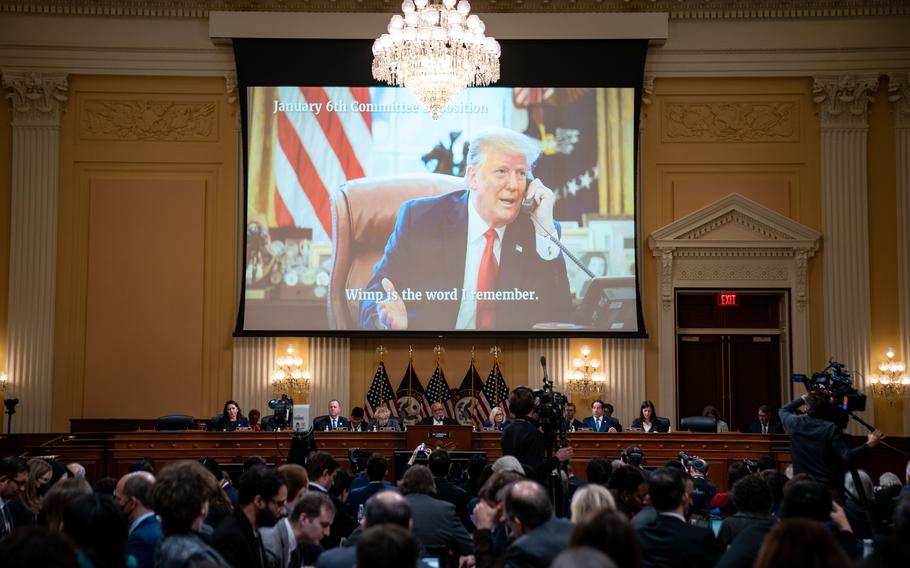 An image of President Donald Trump is displayed on a screen as the House Select Committee to Investigate the January 6th Attack on the United States Capitol conducts its final hearing in the Cannon House Office Building on Monday, Dec. 19, 2022, in Washington, D.C. (Kent Nishimura/TNS)

WASHINGTON — The highest-profile congressional investigation since Watergate concluded Thursday that former President Trump intentionally spread false claims about the 2020 election and provoked a mob of his supporters to attack the U.S. Capitol.

The long-anticipated, 845-page eight-chapter report from the House select committee probing the Jan. 6, 2021, insurrection provides a road map for potential criminal charges against Trump and others.

Written in a narrative style, rather than the dry bureaucratic tone that characterizes most investigative reports of this magnitude, the document elaborates on the story the committee laid out in its televised hearings earlier this year.

The committee voted Monday to refer its findings to the Justice Department for possible prosecution. Among them are four possible federal charges against Trump, including assisting, aiding or comforting those involved in an insurrection.

The Justice Department is conducting its own investigation into the Jan. 6 attack, which left five people dead.

“As you read this report, please consider this: Vice President Pence, along with many of the appointed officials who surrounded Donald Trump, worked to defeat many of the worst parts of Trump’s plan to overturn the election,” committee Vice-Chair Rep. Liz Cheney, R-Wyo., wrote in the foreword to the report. “This was not a certainty. It is comforting to assume that the institutions of our Republic will always withstand those who try to defeat our Constitution from within. But our institutions are only strong when those who hold office are faithful to our Constitution.”

The report begins with the weeks leading up to the election and evidence the committee collected that Trump intended to declare victory on election night regardless of what the results showed.

It documents Trump and his allies’ efforts to overturn the election results, detailing court cases, appeals to state lawmakers to throw out vote tallies and a pressure campaign on Department of Justice officials to intervene and declare, without evidence, that the election was stolen.

Like the committee’s series of hearings, the report concludes with the 187 minutes Trump sat in a White House dining room on Jan. 6, 2021, watching as a mob shattered windows and defaced the Capitol while ignoring his family, staff and fellow Republicans, who were all urging him to intervene.

“Our country has come too far to allow a defeated president to turn himself into a successful tyrant by upending our democratic institutions, fomenting violence, and, as I saw it, opening the door to those in our country whose hatred and bigotry threaten equality and justice for all Americans,” Committee Chairman Rep. Bennie Thompson, D-Miss., wrote in the report’s foreword.

The 18-month investigation collected more than 1,000 depositions, including from many of Trump’s top aides, Cabinet officials and family members.

Thompson said Monday that the bulk of the nonsensitive material compiled by the panel will become public before the end of the year. Thompson has not said how many documents will be released or what will be deemed sensitive.

The report, which likely marks the final act of the bipartisan committee, includes a list of 11 recommendations, including changes to Capitol Police oversight, new protections for election workers and officially declaring the riot an insurrection so those who participated would be barred from holding office in the future under the Constitution’s 14th Amendment.

The document also includes four appendices on topics including the funding behind Trump’s Jan. 6 rally and the intelligence failures that allowed the attack to occur.

Republicans, who take control of the House on Jan. 3, have said they don’t plan to continue the committee’s work. In fact, House Minority Leader Kevin McCarthy (R-Bakersfield), the front-runner to become speaker next year, said Republicans may investigate the workings of the Jan. 6 committee itself.

That left the Jan. 6 panel racing to make its report and potentially millions of pages of underlying evidence public in less than two weeks.