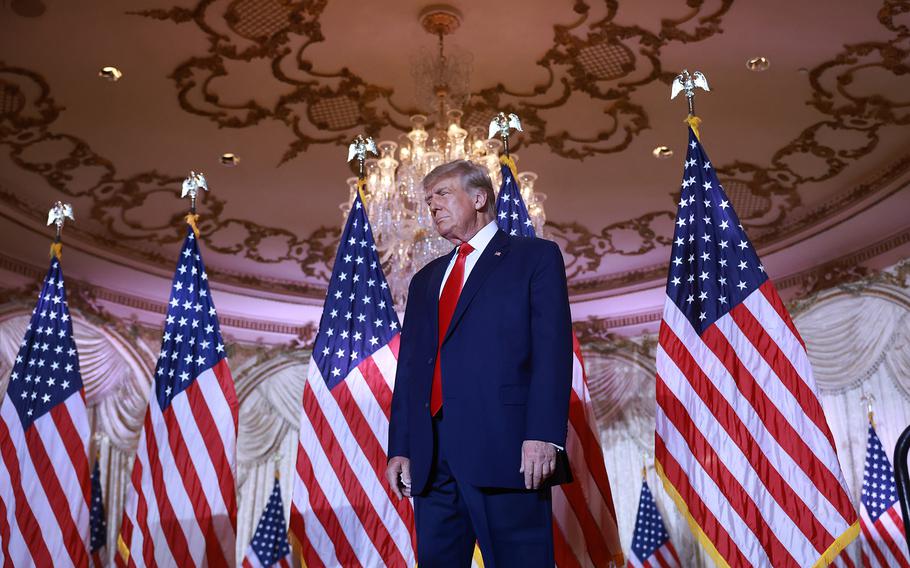 Former President Donald Trump arrives on stage to speak during an event at his Mar-a-Lago home on Nov. 15, 2022, in Palm Beach, Florida. (Joe Raedle/TNS)

On a 222-201 vote, the House sent to the Senate a bill that stands no chance of becoming law in this Congress, as senators prepared to leave town for the year after completing work on a fiscal 2023 omnibus spending package. But Senate Democrats plan to keep pressing the issue next year.

In the House, only five Republicans joined all Democrats in voting for the measure, which most in the GOP dismissed as a partisan attack on Trump.

House Ways and Means Chairman Richard E. Neal put forward the bill this week alongside committee Democrats’ report on IRS audits of Trump’s tax returns. Their report found the agency generally didn’t launch examinations of his filings for years, lacked the resources to conduct thorough reviews, and hasn’t completed audits of his taxes from around his time as president.

“We should codify the system that we have discovered in recent days is not only dysfunctional, it’s nonexistent,” the Massachusetts Democrat said during floor debate on his bill.

The panel’s top Republican, Rep. Kevin Brady of Texas, said in floor remarks that the effort had nothing to do with the presidential audit process and was instead about going after Trump. He pointed to the fact that presidents aren’t required to release their tax returns by law.

“While I would recommend it for all, the truth of the matter is at the end of the day this is political targeting,” Brady said.

The five GOP lawmakers who voted for Neal’s bill — Reps. Liz Cheney of Wyoming, John Katko of New York, Adam Kinzinger of Illinois, Tom Rice of South Carolina and Fred Upton of Michigan — all voted to impeach Trump after the Jan. 6 insurrection and none are returning in the next Congress.

Rice was absent from the Ways and Means meeting Tuesday night when the panel took up Trump’s tax returns. He didn’t participate in the party-line vote to release a pair of reports with supporting materials on Trump’s tax returns and IRS audits of his taxes.

That vote wrapped up a three-year court battle to obtain six years of Trump’s filings from the IRS. Trump was the first president since Richard Nixon not to voluntarily disclose his tax returns.

The report from Democrats largely focused on the IRS’s audit processes which are spelled out in regulation, while another from the nonpartisan Joint Committee on Taxation included information from Trump’s returns and identified areas that warranted further examination by auditors.

The committee had not yet released Trump’s tax returns themselves as of Thursday afternoon but was expected to do so within days — at most — pending redactions of personal information such as Social Security numbers and bank account information.

Neal’s bill would require the Treasury secretary – and therefore IRS – to begin examining a president and his or her spouse’s income tax returns “as rapidly as practicable” after they’re filed and publicly release online an initial report on the audit within 90 days. The IRS would then have to issue regular, public updates on the audit status and produce a final report when the examination is complete, detailing any adjustments or controversies in the documents.

The part of the tax code under which Neal accessed Trump’s returns, section 6103, would also be amended to require the Treasury Department to make presidents’ tax returns and audit materials public.

Senate Finance Chair Ron Wyden or Oregon said in a statement Wednesday that he’d work to pass the bill through the chamber.

But that work would have to come next year when Democrats will retain control of the Senate. Republicans are taking control of the House, making legislative success on an issue so tied to Trump unlikely.

Even without a path for Neal’s bill to become law, outgoing House Majority Leader Steny H. Hoyer of Maryland pointed to the importance of a vote. He told reporters that there was “no expectation” Republicans would be willing to move the legislation next year.

“It ought to pass one house at least because the Republicans have pursued cover-up for every day since January 6,” Hoyer said, referencing the insurrection at the Capitol.

Neal pointed to how the measure caps a yearslong fight to access Trump’s tax returns and get a window into how the IRS handled them.

“This clarifies everything that this debate is about,” he said. “It’s forward-looking. It’s not about being punitive.”