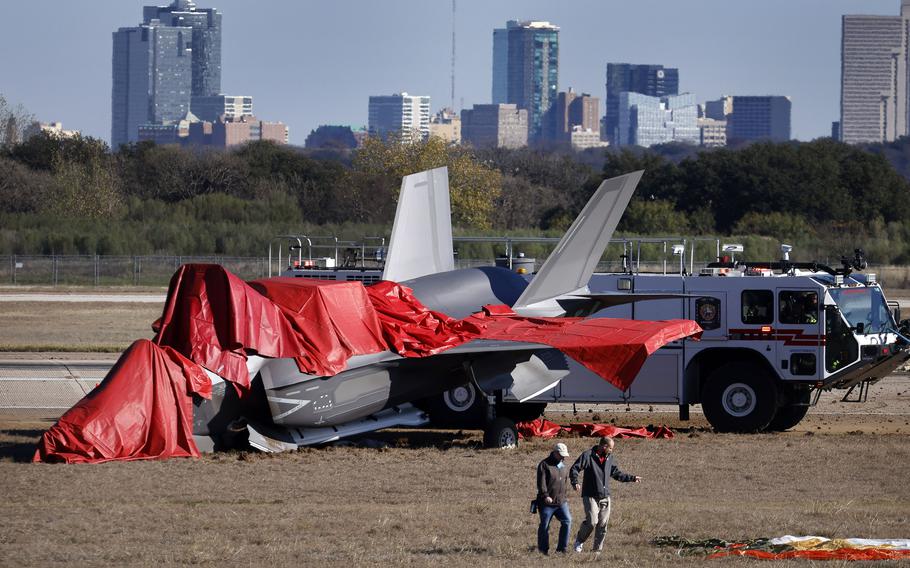 Officials look over the F-35B military aircraft wreckage, including the parachute (right) along the runway at the Naval Air Station Joint Reserve Base in Fort Worth, Dec. 15, 2022. The pilot ejected successfully as the plane bounced off the runway after hovering. The Fort Worth skyline can be seen in the background. (Tom Fox, The Dallas Morning News/TNS)

(Tribune News Service) — An Air Force major could be seen rocketing into the air after a state-of-the-art military jet smashed into a Fort Worth runway earlier this month. In a matter of seconds, a parachute opened and the pilot floated back to the ground.

When the pilot pulled the seat’s ejection handle, he triggered a sequence of events that saved his life, according to an aviation expert.

Lockheed Martin makes the aircraft, an F-35B Lightning II jet, and said the pilot “ejected successfully” and was safe. But ejection seats require a complex process to successfully get a pilot out of dangerous situations, according to Martin-Baker, the United Kingdom-based company that designed the seat.

The decision to eject is not taken lightly, said the expert, Manolis Karachalios.

“Even though it might look very straightforward for the pilot to just pull the ejection handle, it takes a lot of experience, a lot of thinking and a lot of information processing in a very, very short time,” said Karachalios, a former flight commander in the Hellenic Air Force, a branch of Greece’s armed forces.

Ejection is a complex and costly safety procedure designed to preserve the pilot’s life. In less than three seconds, a pilot, along with their seat, can be blasted hundreds of feet into the air before a parachute is deployed.

The Air Force major who made his descent at the Naval Air Station Joint Reserve Base in Fort Worth was taken to a hospital as a precautionary measure but was uninjured, according to the Defense Contract Management Agency.

”Our people are our number one priority and we’re grateful no one was hurt,” the agency said in a statement.

Lockheed Martin said in a statement that it is working with officials after the “mishap” and that “safety remains our top priority, and we are supporting the investigation.” 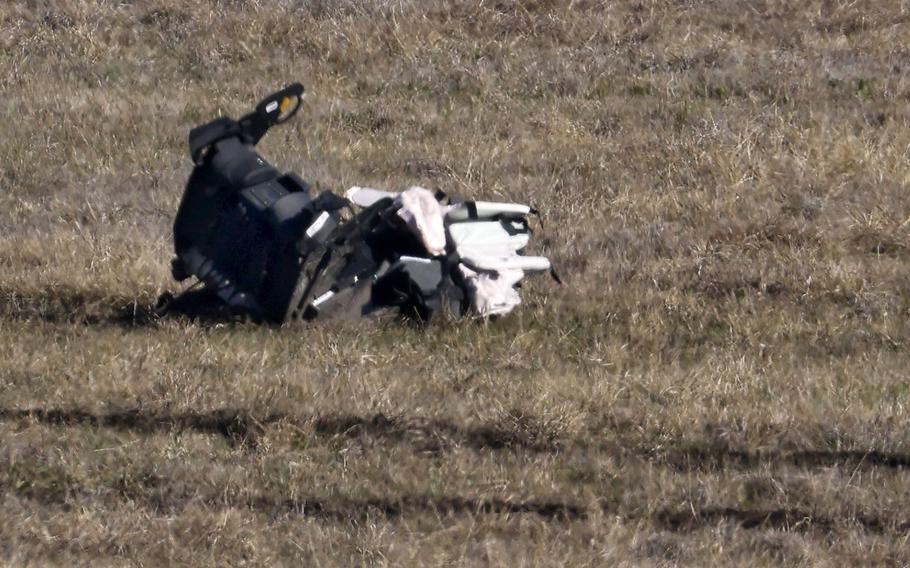 An F-35B military aircraft pilot seat rests off the runway at the Naval Air Station Joint Reserve Base in Fort Worth, Dec. 15, 2022. The pilot ejected successfully as the plane bounced off the runway and crashed after hovering. (Tom Fox, The Dallas Morning News/TNS)

How does aircraft ejection work?

In December’s crash landing, the F-35B — which can land like a helicopter and take off in short distances — was hovering before it began to land. In a video shared widely online, the jet bounces, its nose crashes into the ground, its front landing gear snaps off and a plume of smoke emerges as the plane slides on the runway,.

Then, a flash is seen coming from the aircraft as the pilot ejects.

“I couldn’t believe that this pilot had survived — it’s impressive,” Karachalios said. “But ejection systems are so modern they help pilots to survive.”

The pilot’s ejection marks 7,686 lives saved by a Martin-Baker seat since 1949, according to the company. About a week earlier, a Turkish Air Force pilot ejected. They all “ejected successfully,” Martin-Baker said on Twitter.

Last year, an instructor and a naval student ejected from a USN-T Goshawk jet that crashed in Lake Worth. Authorities said one pilot was found tangled in power lines, hanging from a parachute, and another pilot was found near the crash site. Both were injured. A few days later, Martin-Baker tweeted about the ejections.

Martin-Baker said on its website that once a pilot pulls the ejection handle on its seats, the entire seat leaves the cockpit, and once the pilot is at a “sensible” height and speed to deploy a parachute, the seat separates.

“I believe it’s a big morale booster having ejection seats in the fighter jets,” he said. “It gives peace of mind.”

After the pilot decides to pull the handle, the ejection process ensues with three major phases, lasting only a few seconds, according to Karachalios.

First, the pilot is fired out of the aircraft’s cockpit with the help of gun cartridges and a rocket motor located under the seat. During this phase, the pilot’s legs also retract and their seat belt tightens.

“The rocket motor … fires and gives the extra boost to push the ejection seat with a pilot away from the aircraft,” Karachalios said.

However, the ejection seat may not always shoot upward. During the Fort Worth ejection, the pilot’s seat appeared to be boosted at a “45- or 60-degree” angle, Karachalios said. A seat can send a pilot flying between 200 and 300 feet in the air when a plane is at ground level and not traveling, according to the Martin-Baker website.

Simultaneously, the plane’s canopy either separates or fractures to allow the seat to rocket upward, Karachalios said. In the F-35B, the canopy splits left and right, leaving a clear path for the pilot to eject, he said.

In the next phase, the pilot’s parachute deploys. If the pilot ejects at a low altitude, it deploys immediately — which was the case for the pilot in Fort Worth. At a higher altitude, typically above 15,000 feet, the parachute delays deployment until the pilot reaches a safer height. Right around this time, the pilot also separates from the ejection seat, detaching from their seat belt and other harnesses.

Lastly, the ejected pilot enters the “survival phase,” landing on the ground or water and being rescued by law enforcement, helicopters or other groups nearby. This phase can get more complicated if the pilot lands on water, which could involve fishermen or other boaters responding to the pilot.

Ejecting takes a toll on pilots’ bodies. Because to the level of G-forces they endure, pilots who eject can suffer injuries to their neck and spine, which are the main body parts exposed from the first phase of ejection.

Modern ejection seats can pull up to 25 G’s, but most pull anywhere from 14 to 20, Karachalios said. Most people cannot withstand more than 9 G’s for more than a few seconds, according to Scientific American.

What happens to the aircraft and the seat?

After an ejection, no part of the seat can be reused or salvaged, Martin-Baker says.

One seat can cost anywhere from about $120,000 to $240,000, but it’s a difficult estimate as cost depends on the type of seat and number of seats purchased, according to the Martin-Baker website.

Martin-Baker says it has more than 17,000 seats in 54 different types of aircraft across 84 countries — more than half the market for ejection seats.

Lockheed Martin’s Tarrant County facility is the primary place where the company manufactures F-35 aircraft. The arms, defense, security and aerospace company is one of the largest contractors working with the Department of Defense.

It remains unclear what led to the crash in Fort Worth. Lockheed directed questions about the incident to the Naval Air Systems Command.

The Naval Air Systems Command is overseeing an investigation of the incident, which is expected to be complete within 30 days, spokeswoman Amy Behrman said.

An investigation board is working to determine the extent of damage to the aircraft and whether it can be repaired, she said.