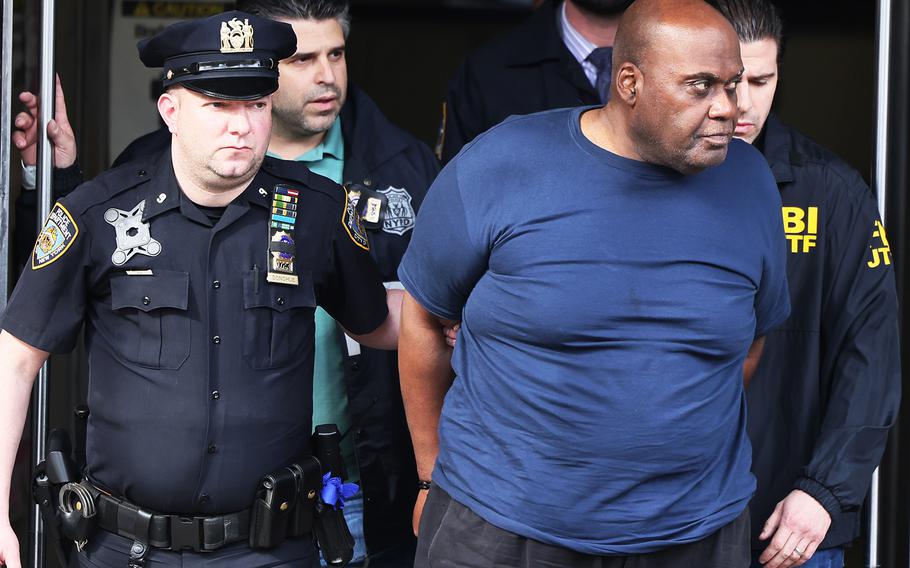 Suspect Frank James is led by police from Ninth Precinct after being arrested for his connection to the mass shooting at the 36th Street subway station on April 13, 2022, in New York City. (Michael M. Santiago/TNS)

NEW YORK — Frank James, who’s accused of wounding 10 people during a rush-hour mass shooting on a Brooklyn subway, is expected to plead guilty in his federal terrorism case, according to a new court filing.

James, 63, who was hit with upgraded charges last week, advised his lawyers “that he wishes to schedule a guilty plea to the superseding indictment,” according to a letter filed Wednesday by his lawyers.

He’s accused of boarding a packed N train on April 12, setting off a smoke bomb and firing a gun 33 times, as the train pulled into the 36th Street station in Sunset Park that morning. Ten people were struck by gunfire. All survived.

James was arrested the next day after an intense manhunt.

Prior to the shooting, James recorded dozens of hours of YouTube videos, ranting about Mayor Eric Adams, homeless people in the subway system, gun violence and how outreach workers are “homosexual predators.” At one point he said that he is a “victim” of Adams’ mental health policies.

James’ request was filed just hours after the judge rejected a bid by his lawyers to move back his trial, which was slated to start on Feb. 27. Kuntz had pushed back on suggestions to delay the trial at a number of James’ previous court appearances.

His defense team argued that they’d need more time to sort through the more than 1,900 pages of victims’ medical records prosecutors shared with them on Monday, and to analyze the upgraded charges against James.

The new indictment included 10 counts of committing a terrorist attack or other violence against a mass transportation system and vehicle carrying passengers and employees, one for each gunshot victim, as well as an 11th count for discharging a firearm during a crime of violence.

Each charge against James carries the possibility of life in prison. He was previously charged with a single terrorism offense.

James’ lawyers asked Kuntz last month to change his trial venue to Chicago or another city, arguing that he can’t get a fair shake in New York City because of the intense media coverage of the shooting.

In a separate filing, they argued that he shouldn’t face terrorism charges since the terrorism laws apply only to subway facilities, not the subway cars themselves.

Kuntz still hasn’t issued a ruling on those requests.