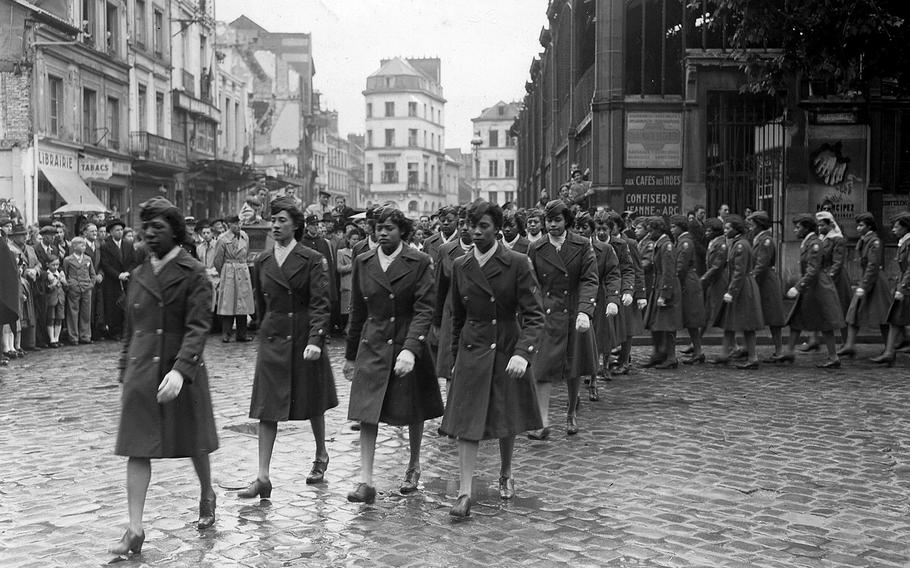 Members of the 6888th Central Postal Directory Battalion march in a parade on May 27, 1945, that followed a ceremony in honor of Joan of Arc at the marketplace in Rouen, France, where she was burned at the stake. Tyler Perry is reportedly producing and directing a movie about the “Six Triple Eight,” the only female African American unit sent overseas in World War II. (National Archives)

Filmmaker Tyler Perry is making a wartime drama about the only female African American battalion sent overseas during World War II, according to film industry publications and the author of the magazine article on which the film will be based.

The film “Six Triple Eight,” whose title is derived from the nickname of the 6888th Central Postal Directory Battalion, is to begin production early next year, according to the Hollywood Reporter and Deadline.

Perry is adapting an article by historian Kevin Hymel that was published in 2019 in Sovereign Media’s WWII History magazine.

“Woo Hoo! Tyler Perry made the big announcement about the 6888th movie today,” Hymel posted on his Facebook page Thursday. “I’m just happy to be part of the team.”

The Women’s Army Corps’ all-Black battalion was sent to Europe in response to a mail backlog that was preventing front-line troops from getting mail and affecting morale.

The War Department “acquiesced” in 1944 to sending them overseas, according to the U.S. Army Center of Military History, and the next year the unit sailed for Birmingham, England.

“In Birmingham, the women of “Six Triple Eight” confronted warehouses stacked to the ceiling with letters and packages. These buildings were unheated and dimly lit. ... Rats sought out packages of spoiled cakes and cookies,” Army historians wrote.

The women worked in shifts 24/7. They tracked service members by maintaining about 7 million information cards, including serial numbers to distinguish different people with the same name.

They investigated insufficiently addressed mail to try to determine the intended recipient and handled the duty of returning mail addressed to service members who had died, according to Army historians.

The 6888th Central Postal Directory Battalion processed an average of 65,000 pieces of mail per shift and cleared what was a six-month backlog of mail in three months, according to the center.

But its members were not allowed in American Red Cross clubs for U.S. military personnel.

“The women of the 6888th found that they were the subject of some hostility and rumors impugning their character spread by both white and black male soldiers who resented the fact that black women were allowed in the Army,” according to the military history center.

The unit was subsequently sent to France then returned to Fort Dix, N.J., where it was disbanded.

“There were no parades, no public appreciation, and no official recognition of their accomplishments,” the military history center wrote.

But nearly 40 years later, the 6888th began to be celebrated in books, documentaries, museum exhibits and public ceremonies. In March, President Joe Biden signed into law a bill awarding the Congressional Gold Medal to the battalion.

Tyler Perry Studios declined to comment on the upcoming film.