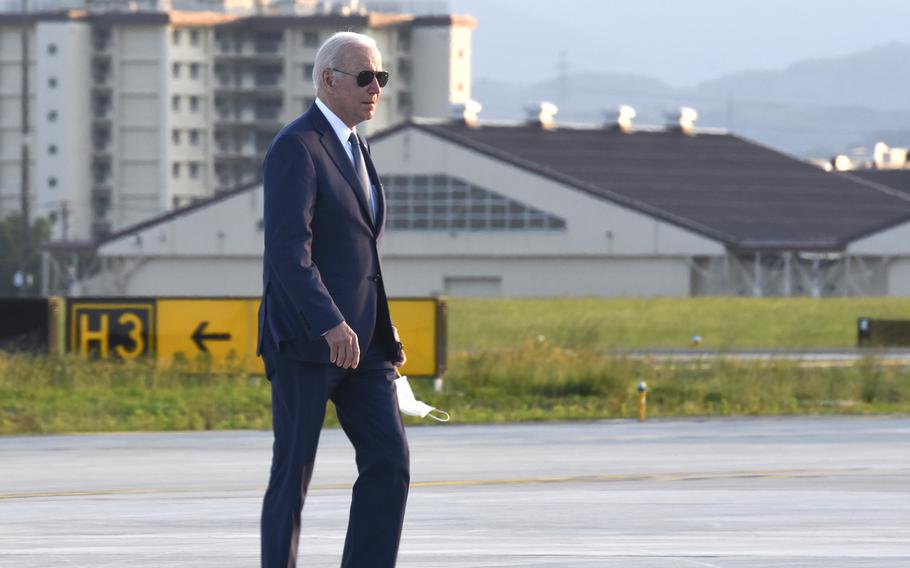 But it never had to face one from an empowered opposition — until now. While much attention is focused on Republicans’ plans to investigate Biden’s son Hunter, some White House and other administration officials privately say an Afghanistan probe could prove more emotionally difficult and politically damaging.

The White House can — and plans to — dismiss any investigation into Hunter Biden as a conspiratorial witch hunt, but even Democrats concede that Congress has a right to scrutinize a troubled military action that resulted in American and Afghan deaths. Democrats may argue Hunter Biden’s business dealings aren’t of concern to ordinary Americans, but few would say the same of the Afghan pullout.

The investigation would probably gear up just as President Biden launches his reelection campaign early next year. The August 2021 withdrawal was a low point in Biden’s presidency, sending his approval ratings into a tailspin as desperate scenes from Kabul aired across the world, and the probe would probably resurface such troubling issues as the fate of Afghan interpreters who worked for the United States but were left behind.

That prospect is worrying to some on the Biden team, according to current and former White House aides, Pentagon officials and others across the administration, many of whom spoke on the condition of anonymity to talk candidly about a highly sensitive subject.

“From the moment the events of August 2021 happened, there was a knowledge at the moment that investigations would happen . . . because it got so much public scrutiny,” one former White House official said. “It’s also an issue where they look back to 2021, and the point at which the president’s approval rating dropped was around Afghanistan, so it brings back the worst moment.”

White House officials take some solace from the fact that lawmakers on both sides have already scrutinized the Afghan withdrawal and released reports about it. They also say they do not expect a big bombshell from any hearings because the episode has been so thoroughly examined. Top administration officials, including Defense Secretary Lloyd Austin and Secretary of State Antony Blinken, have previously testified about the pullout.

But an investigation led by House Republicans who chair committees and wield subpoena power is a different matter, and GOP lawmakers have made it clear that Afghanistan will be a top investigative target.

Biden’s pullout of U.S. forces from Afghanistan after more than 20 years of war fulfilled a major campaign promise and a longtime goal. The president argued that the Afghanistan operation, launched after the Sept. 11, 2001, terrorist attacks, had lost its original purpose and become a costly, futile exercise in nation-building.

But when forces began pulling out, the U.S.-backed government shocked many observers by collapsing almost immediately, driving panicked Afghans to Kabul amid scenes of chaos and death. Tens of thousands ultimately were successfully evacuated, but many others were left behind.

Administration officials continue to vigorously defend the decision to leave Afghanistan as a sound one, acknowledging that they made mistakes and saying they have learned from them.

White House officials also cite the recent killing of al-Qaeda leader Ayman al-Zawahiri — one of the world’s most wanted terrorists and a key planner of the Sept. 11 attacks — in a U.S. drone strike. The administration’s ability to carry out such an operation, despite no longer having troops on the ground, was a vindication of the decision to withdraw, White House officials say, though it also highlighted a new world in which Zawahiri could live in downtown Kabul a short distance from the former U.S. Embassy.

Sabrina Singh, a Pentagon spokeswoman, said Austin and other Defense Department leaders “have testified extensively in open and closed hearings about the war in Afghanistan, including the U.S. drawdown and evacuation.” The department, she said, “respects the important oversight role that Congress plays, and will continue to work with the Congress on important national defense issues and to respond appropriately to legitimate Congressional inquiries, just as we always do.”

A State Department spokesman said the agency has engaged with Congress more than 150 times about Afghanistan this year and expects to continue that conversation with the new Congress next year.

The Defense Department pledged to carry out its own review of what happened, but has not released the findings.

One White House official said the administration has spent months preparing for a potential Afghanistan probe and is confident that officials can answer any potential questions. Some likely to be called to Capitol Hill — including Austin, Blinken and Gen. Mark A. Milley, chairman of the Joint Chiefs of Staff — have answered questions before and know what they are likely to be asked.

Some Democrats in Congress, while admitting that the withdrawal was chaotic and painful, say it would have been almost impossible to carry out a graceful exit from a country as hostile and unstable as Afghanistan.

“I would hope that Democrats defend the president’s decision to leave Afghanistan, and I would hope we push back on this completely false, made-up narrative that there was a way to leave Afghanistan amidst the unanticipated overnight collapse of the Afghan government in a way that was neat and tidy,” said Sen. Chris Murphy (D-Conn.), an ally of the White House.

Murphy said Biden’s critics imagine a mythical scenario that was never in the cards, an “unrealistic, fantastical belief that withdrawal, under the circumstances, could have been done in a way that didn’t involve some really tough negative outcomes.”

Republicans have not yet decided exactly where an inquiry will focus or how it will do its job, decisions that will depend in part on who leads key House committees.

In August, the Republican minority on the House Foreign Affairs Committee released the findings of its own inquiry, concluding that a failure of planning left American leaders with only bad options once the Taliban took control. Biden disregarded the concerns of senior U.S. military officials that withdrawing American forces could lead to Taliban gains, the report concluded, adding that he “lied” about the advice he received.

The report also said that 1,450 Afghan children were evacuated without a parent or guardian and that more than 800 U.S. citizens were left behind when the evacuation ended, a figure significantly higher than Biden officials disclosed at the time. Republicans overseeing the report said the administration did not furnish requested documents, or submit to dozens of requested interviews, so a fuller investigation is required.

Administration officials rejected the report’s findings, saying they conducted extensive planning and pre-positioned U.S. troops in the Middle East to be ready in the event of a crisis. They also note that it was President Donald Trump who struck a deal with the Taliban in 2020 to withdraw U.S. troops, saying that if they had not followed through, the Taliban would have stepped up its attacks, leading to a deadly intensification of the war.

Democrats also warn that if Republicans make their investigation overly partisan, they will overreach and their efforts will backfire. Rep. Seth Moulton (D-Mass.), a Marine veteran who served in Iraq and supports a broad investigation, said that while many Republicans understand the importance of a neutral, bipartisan accounting, he fears it is “the partisans who are going to run the place.”

As Republicans mull their options, one possibility is a joint investigation by the House Armed Services, Foreign Affairs and Intelligence committees. That would let investigators question all the relevant agencies, said Rep. Michael Waltz (R-Fla.), rather than conducting “siloed” investigations in which each committee speaks only with the agency it oversees.

Waltz, who served in Afghanistan with the Army and is now on the Armed Services Committee, said a joint investigation of some kind would “probably be the only way” to go, though he added that the decision is in the hands of House Republican leaders.

In addition to decisions made by the Biden administration during the withdrawal, Waltz said he wants to scrutinize the ongoing efforts to evacuate at-risk Afghans, the current resettlement push in the United States, and the efforts of U.S. operatives to effectively track terrorist organizations in Afghanistan.

While administration officials have highlighted the grueling evacuation as a “historic achievement” that removed more than 120,000 people in 17 days, it also put thousands of U.S. troops and diplomatic personnel in peril as throngs of desperate people tried to reach the airport and armed Taliban fighters posted security just outside. About 170 Afghans, as well as the 13 U.S. troops, were killed in the suicide bombing attributed to the Islamic State on the airport’s outskirts; that attack was followed days later by a botched American drone strike that killed 10 civilians.

U.S. military documents released to The Washington Post in February detailed an internal conflict between the Defense and State departments over how to carry out the withdrawal. Military personnel would have been “much better prepared” to mount an orderly evacuation if “policymakers had paid attention to the indicators of what was happening on the ground,” Rear Adm. Peter Vasely, the top U.S. commander during the evacuation, later told Army investigators.

Waltz said he is wary of efforts by Democrats to broaden the scope of a House investigation to cover the entire war, noting that an independent Afghanistan War Commission already has been established by Congress to do that. Broadening the scope in the House is likely to limit how much attention is paid to decisions the Biden administration made in the months before the fall of Kabul, he said.

“I think that’s a deliberate effort to dilute the amount of time that can be spent on the withdrawal decisions,” Waltz said.

But Democrats, including some who have criticized the Biden administration, said there is value in reminding Americans that the war stretched for 20 years under two Republican and two Democratic presidents. Moulton, for example, said he supports an investigation that scrutinizes the “entirety of the conflict.”

“Look, there’s a lot of accountability to go around here,” he said. “There will be a lot of Republicans and Democrats who don’t want to examine this issue and say it’s just consigned to the past, because they don’t want to get their own party in trouble. But this is about doing right by our troops and ensuring that the mistakes in Afghanistan aren’t made again.”

Moulton said that the American effort in Afghanistan “didn’t go to hell in a handbasket with the withdrawal” and that the country does not need a “narrow investigation focused on just President Biden.” Problematic decisions were made before then, he said, including Trump’s choice to sign a deal with the Taliban that undercut the Afghan government and called for all U.S. troops to withdraw in 2021.

“If this just becomes an effort to score political points,” Moulton said, “we all lose.”