On her way home, Brittney Griner says she'll play in the WNBA this season 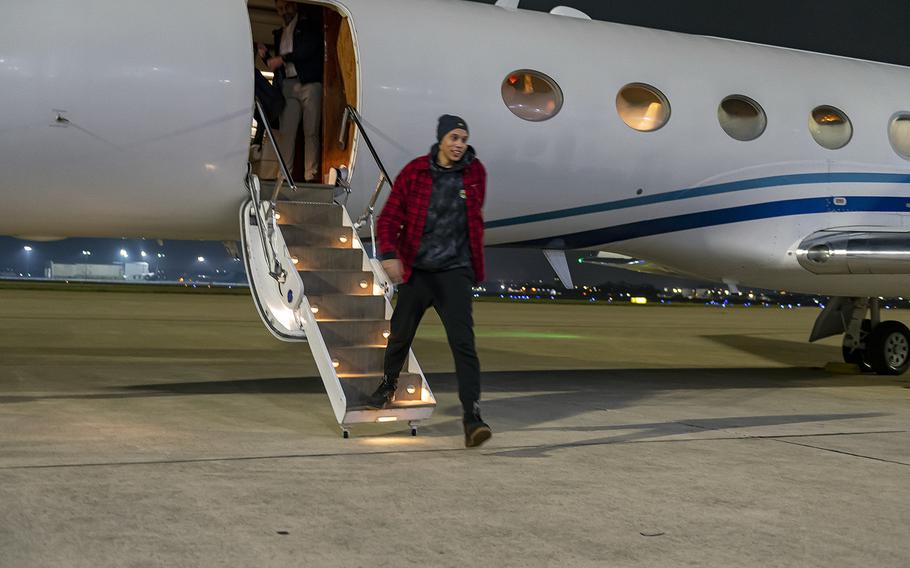 WNBA star Brittney Griner arrives at Kelly Field in San Antonio following her release in a prisoner swap with Russia, on Dec. 9, 2022. “It feels so good to be home!” Griner posted to Instagram on Friday, Dec. 16, 2022, and said she plans on play basketball again next season for the WNBA’s Phoenix Mercury. (Miquel A. Negron/U.S. Army)

Writing that "it feels so good to be home" and thanking numerous people who assisted in her release from Russian detention, basketball star Brittney Griner announced Friday via Instagram that she has departed Brooke Army Medical Center in San Antonio, where she had been recovering from her incarceration in a Russian prison. Griner also announced that she intends to resume her WNBA career with the Phoenix Mercury when the season begins next year.

Griner had been at the military hospital's trauma center, located at Fort Sam Houston, for a week after she was freed in a prisoner swap. She had been in Russian custody since February, when authorities detained her at Sheremetyevo International Airport outside Moscow and accused her of carrying vape cartridges containing cannabis oil, which is illegal in Russia. She pleaded guilty to the charges in July, and her last few weeks of confinement were spent in a penal colony, a type of prison facility known for its brutal living conditions.

U.S. authorities obtained Griner's freedom in exchange for that of notorious Russian arms dealer Viktor Bout, a former Soviet Army lieutenant colonel whom the U.S. Justice Department once described as one of the world's most prolific arms dealers. Bout was serving a 25-year sentence after having been charged with conspiring to sell tens of millions of dollars in weapons that U.S. officials said were to be used against Americans.

U.S. officials have said they are still working to secure the release of Paul Whelan, a U.S. Marine turned corporate security executive who was convicted of espionage and is serving a 16-year sentence in a Russian prison. In her statement Friday, Griner said she would use her platform to work for Whelan's release.

Griner, 32, has played nine seasons for the Mercury, helping the team to the WNBA title in 2014. The eight-time WNBA all-star has led the league in points per game twice and in blocks per game eight times in her nine seasons.