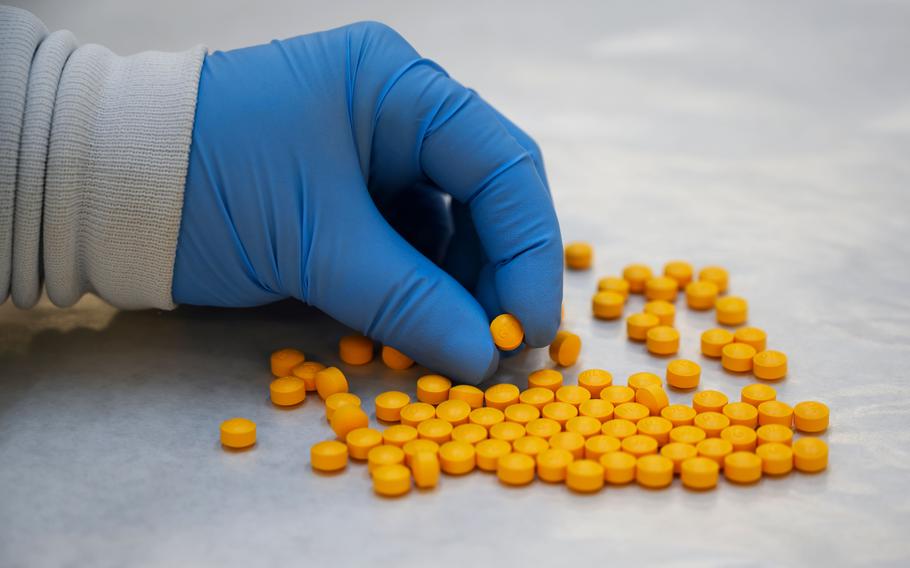 A Drug Enforcement Administration (DEA) chemist checks confiscated powder containing fentanyl at the DEA Northeast Regional Laboratory on Oct. 8, 2019 in New York. A California man and his alleged partner in cybercrime took to the dark web to peddle, among other drugs, thousands of fake oxycodone pills that were laced with fentanyl, according to the U.S. Department of Justice in December, 2022. (Don Emmert/AFP/Getty Images/TNS)

LOS ANGELES (Tribune News Service)  — A California man and his alleged partner in cybercrime took to the dark web to peddle, among other drugs, thousands of fake oxycodone pills that were laced with fentanyl, according to the U.S. Department of Justice.

Now they're facing life in prison after being caught up in an FBI sting.

In a 19-count federal grand jury indictment, Westminster resident Michael Ta, 24, and Houston resident Rajiv Srinivasan, 37, are accused of "a conspiracy to distribute and to possess with the intent to distribute fentanyl and methamphetamine," according to a Department of Justice news release.

Srinivasan allegedly sold the drugs on "Darkode," a forum on the dark web for cybercrime. A 2015 investigation of the forum by international law enforcement resulted in multiple arrests, including 12 in the United States. At the time, U.S. Attorney David J. Hickton of the Western District of Pennsylvania said Darkode was "the most sophisticated English-speaking forum for criminal computer hackers in the world."

On the forum and an encrypted messaging app, the co-defendants sold 123,188 fentanyl pills, more than 143 kilograms of methamphetamine, black tar heroine and cocaine, according to the indictment. Some 7,000 of those pills were allegedly sold to an undercover agent posing as a customer between February and November 2022.

The dark web is a subsection of the internet that is not indexed by search engines and is accessible only via specialized web browsers. Its relative inaccessibility, however, does not shield it from the reach of law enforcement agencies. The news release says users "wrongly believe the dark web allows them to engage in criminal conduct with anonymity."

Once Srinivasan received payments, the indictment says, he would route money through cryptocurrency exchanges. Blockchain analysis company Chainalysis estimated that $14 billion of illicit transaction activity occurred in 2021, though that only represented 0.15% of all cryptocurrency transactions.

Ta is accused of carrying out the process of fulfilling orders: acquiring, storing and distributing packages of pills while his partner collected payment. A spreadsheet shared by Ta and Srinivasan allegedly contained around 1,500 customers.

Srinivasan was set to be brought from Texas to California to stand trial. Ta was released on bond. His arraignment is set for Dec. 22.

The criminal conspiracy charge against the men carries a maximum sentence of life in prison.