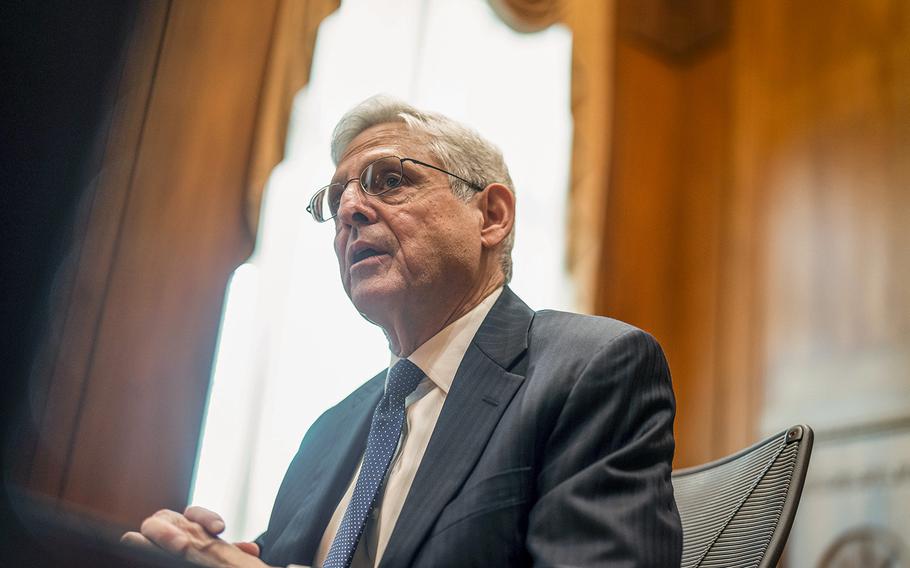 Attorney General Merrick Garland at his offices at the Justice Department on May 3, 2022, in Washington D.C. (Jabin Botsford/Washington Post)

Garland's move effectively seeks to eliminate the significant difference in the amount of powder cocaine relative to crack cocaine that is required to be in a suspect's possession to trigger mandatory minimum federal sentences if convicted.

Critics of the longtime policy have said it is a relic of the Washington's misguided war-on-drugs era that targeted Black and Brown communities, resulted in overpopulated prisons and strained federal and local resources at the expense of more effective strategies.

Proponents of treating crack dealers more punitively have said that form of the drug is faster acting and capable of producing more intense highs. Under current federal policy, possession of 28 grams of crack cocaine would trigger a mandatory minimum prison sentence of five years, compared with 500 grams of powder cocaine.

Garland's memo to the nation's U.S. attorneys directs prosecutors to charge "pertinent statutory quantities that apply to powder cocaine" when pursuing crack cases and to "advocate for a sentence consistent with powder cocaine rather than crack cocaine."

The move, long sought by civil rights advocates, comes as the Equal Act, a legislative bill that would eliminate the disparity, has been stalled in the Senate amid objections from some Republicans after passing the House last year with bipartisan support.

Joe Biden, then a U.S. senator from Delaware, crafted the 1986 crime bill that initially set a 100-to-1 ratio between powder and crack cocaine to trigger mandatory minimum sentences. The Fair Sentencing Act 0f 2010 reduced the ratio to 18-to-1. The Biden administration endorsed the Equal Act last year.

Though studies have shown that historically most crack cocaine users have been White or Hispanic, a report from the U.S. Sentencing Commission last year found that 77 percent of those convicted of crack trafficking offenses in 2020 were Black.

Garland's memo cited Justice Department testimony last year to the Senate Judiciary Committee that such a disparity "is simply not supported by science, as there are no significant pharmacological differences between the drugs: they are two forms of the same drug, with powder readily convertible into crack cocaine."

During his confirmation hearing in February 2021, Garland told Sen. Cory Booker (D-N.J.), a co-sponsor of the Equal Act, that the inequitable sentencing in crack and powder cocaine cases had a "disparate impact on communities of color."

"There's no justification for this, and we should end this," Garland said at the time. He also said that powder cocaine "is as dangerous with respect to crime rates as crack cocaine, both of which have now been unfortunately overtaken by fentanyl and the opioids. But both of those are bad problems [and] equalizing penalties for crack and powder should have no difference with respect to our ability to fight violent crime."

Garland aides said the new guidelines, which will take effect within 30 days, are part of a broader set of changes the attorney general is making to the Justice Department's charging policies. The department under Garland continues to support the passage of the Equal Act, aides said; unlike a legislative change to federal policy, they noted, Garland's memo would not retroactively apply to previous convictions.

Jim Pasco, executive director of the National Fraternal Order of Police, said in an interview that he supported Garland's directive. Though the group has opposed eliminating the sentencing disparity in the past, and it did not take a position on the Equal Act, Pasco said the police union's views have evolved "as there's been more clarity around the science."

Pasco said the Biden administration has supported police with additional resources to fight a rise in violent crime, and the union does not believe the policy changes on cocaine sentencing will adversely affect the efforts of law enforcement.

Garland's action could face blowback from Republicans who have championed a bill that would reduce the sentencing disparity but not eliminate it entirely. In April, Sens. Charles E. Grassley (Iowa), Mike Lee (Utah), Roger Wicker (Miss.) and Lindsey O. Graham (S.C.) proposed legislation that would reduce the ratio of powder-to-crack cocaine that would trigger mandatory minimum sentences to 2.5-to-1.

Unlike the Equal Act, however, that bill would achieve greater parity in part by increasing penalties for powder cocaine users.

Those Republicans cited an analysis in January from the U.S. Sentencing Commission that said studies in 2005 and 2010 found that crack cocaine offenders had higher recidivism rates that those who used marijuana, powder cocaine, heroin and methamphetamines.

"These statistics show the need for a close look at all available government data before we consider an approach to flatten sentencing for crack and powder cocaine offenses," the senators wrote.