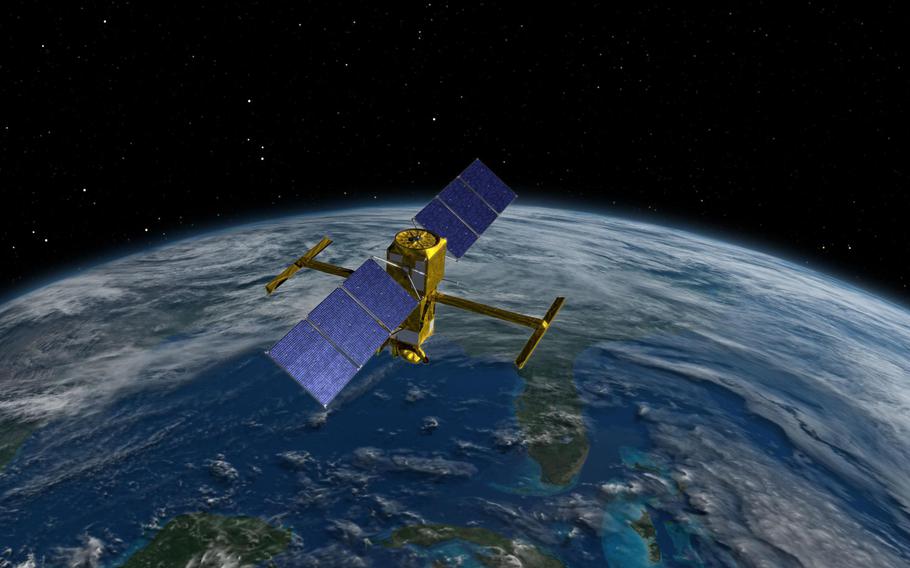 An illustration of the new Surface Water and Ocean Topography satellite. (NASA, JPL-Caltech/TNS)

LOS ANGELES (Tribune News Service) — Before the sun rises Thursday, a rocket carrying the Surface Water and Ocean Topography satellite will blast off from Vandenberg Space Force Base north of Santa Barbara.

When SWOT reaches its destination 553 miles above Earth’s surface, a new era in the study of climate change will begin.

The satellite will be the first to survey almost all the world’s surface water, allowing researchers to consistently track the volume and movement of every ocean, river, lake and stream on the planet.

This joint mission of NASA and France’s National Center for Space Studies is supported by a unique alliance of Earth scientists eager to answer key questions about flooding, climate patterns and our future water supply.

The satellite will be able to see through storm clouds and accurately measure the height of flood waters when terrestrial gauges are submerged. If a country refuses to share information about its water usage along a river, the spacecraft will be able to provide it instead.

SWOT is designed to observe the planet with unprecedented precision and frequency, returning reams of data to help scientists and policy makers plan for floods, droughts and sea level rise.

Scientists say the $1.2 billion mission has the potential to change our understanding of Earth’s water as significantly as the microscope changed our view of the human body.

“The possibilities are so endless that I’m almost not sure where to start,” said Tamlin Pavelsky, a global hydrologist at the University of North Carolina at Chapel Hill and the mission’s hydrology science lead. “It’s like whacking a piñata with a baseball bat and having all this candy pour out, and you just don’t even know what to grab first.”

Previous satellites have monitored either oceans or fresh water. SWOT will be the first to observe both. The mission is a joint effort in oceanography and hydrology — two related scientific disciplines that are often siloed apart.

“The entire water cycle is really important in understanding how climate change is affecting Earth’s surface processes — and not just the transport of water, but heat as well,” said Patrick Barnard, a research director at the U.S. Geological Survey’s Pacific Coastal and Marine Science Center in Santa Cruz who is not affiliated with the mission.

The data gathered by SWOT, he said, will “heavily advance our understanding of not just climate change, but also climate variability, and how that affects droughts and things like monsoons.”

The satellite’s primary tool is the Ka-band Radar Interferometer, or KaRIn. The satellite sends out radio waves, and KaRIn records how much of that energy returns to the satellite, and how long it takes to arrive. Coupled with other measurements, these return signals tell the satellite whether it’s sensing water, and the height of that water’s surface.

Once fully operational in June, SWOT will survey everything between the Arctic Ocean and Antarctica at least once every 21 days. The initial mission will run for three years.

On the freshwater side, SWOT will provide the first comprehensive survey of the planet’s network of rivers, lakes and streams, which are too numerous — and often too remote — to consistently monitor from the ground.

“I can finally use a remote sensing method to estimate stream flow, rather than be reliant on the stream gauge stations, which are pretty sparsely distributed,” said Aakash Ahamed, a doctoral candidate in geophysics at Stanford University.

Sarah Cooley, a surface water hydrologist at the University of Oregon, monitors reservoirs and natural lakes to determine how climate change and human behavior affect water storage. Her work has relied on NASA’s ICESat-2 satellite laser altimeter, which delivers data on the globe’s 227,000 largest lakes and reservoirs two to four times a year. It’s the most sophisticated surface water satellite technology currently available.

That’s about to change. SWOT will return data on up to 6 million bodies of water no less than once every three weeks. The satellite can sense almost every river that’s at least 100 feet wide and every lake larger than 15 acres.

“It’s a huge, huge difference,” Cooley said. “It’s actually kind of crazy to think about what that’s even going to be like, and how we’re going to work with that data.”

SWOT will also make a huge difference in the way scientists monitor changes in the ocean.

Since 1992, sea-level data has been largely measured by TOPEX/Poseidon and other satellite altimeter systems, along with a network of tide gauges that scientists pieced together across multiple countries, agencies and research institutions. These gauges provide only sporadic snapshots of any given coastline, and when a storm hits or a high-tide flood submerges a neighborhood, scientists trying to measure the tide level typically rely on the nearest tide gauge, which is often miles away.

And the altimeters already in orbit, while groundbreaking for more than a generation of oceanographers, have one blind spot: they can’t take measurements right at the tide line. The closest they can get is about 6 miles offshore; in many places, readings are taken as far as 18 miles from the coast.

“We don’t actually know exactly what’s happening at the coast,” said Benjamin Hamlington, a research scientist at NASA’s Jet Propulsion Laboratory in La Cañada Flintridge who is guiding the sea level rise science on the mission. “That’s where SWOT will come in.”

The new satellite will also measure more subtle features in the open ocean that other satellites have never been able to capture with clarity. These smaller-scale currents and circulation patterns play an important but little-understood role in how the ocean absorbs heat — and where it ultimately goes. (The ocean, it is worth noting, has absorbed more than a quarter of the carbon dioxide released by humans since the Industrial Revolution, and about 90% of the resulting heat.)

That knowledge is critical to our understanding of climate change, said Hamlington, who also heads NASA’s Sea Level Change Team. Coastal flooding is expected to hit with greater frequency and intensity in the coming decades, and data from SWOT will significantly improve the forecasts communities rely upon to prepare for that future.

Barnard, who oversees USGS research of climate impacts and coastal hazards along the West Coast and across the Pacific Ocean basin, said satellite technology has completely revolutionized his field.

Traditionally, a researcher might spend several years studying a single beach, lake or river valley. The scientific community would then piece that work into the greater Earth-system puzzle.

In just the last decade, Barnard and his team recruited scientists in Japan, Australia, New Zealand and Canada to study how El Niño and changing climate conditions have increasingly threatened coastal communities across the Pacific Basin. It took 200,000 hours to collect and analyze data from 48 beaches across three continents, ultimately accounting for just 124 of the 6,200 miles of sandy shoreline along the Pacific Rim.

“Now, from space, we can get a lot of that information daily, if we really wanted to, and from anywhere in the world — which is just mind blowing,” Barnard said.

SWOT won’t replace boots-on-the-sand fieldwork completely. For the first few years of the mission, scientists will need to validate its results through extensive on-the-ground measurement.

The sheer amount of data SWOT will return presents challenges of its own. Storing and handling that amount of information is a major undertaking in itself.

“That’s really exciting as a scientist,” she said.