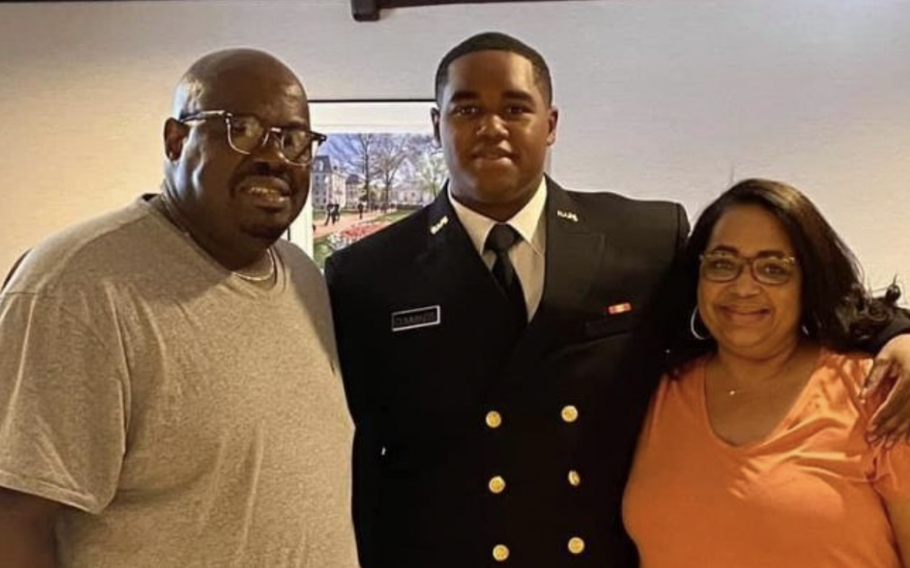 Cummings, the mother of Navy football player Trey Cummings, was killed after midnight on June 29, 2021, while standing on the patio of The Graduate hotel, near Pleasant Street. A medical examiner testified that a bullet struck her chest and passed through her body, damaging her heart, lungs and an artery.

The 57-year-old Houston resident, a highly engaged parent who was heavily involved with supporting student-athletes, was in town with her husband to drop off her son at the Naval Academy to start his plebe year. Family friends testified that Cummings and her husband came to The Graduate that evening and spent time together with them on the patio. They were getting ready to leave when they heard what they thought to be firecrackers, later discovering they were gunshots when Cummings fell over.

Michelle Cummings’ husband, Leonard “Truck” Cummings, has attended each day of the trial, sitting in the front row, often joined by family and friends.

Since the trial began Nov. 28 in Anne Arundel Circuit Court, Assistant State’s Attorneys Jason Steinhardt and Carolynn Grammas have introduced 30 witnesses and more than 100 exhibits in their effort to link Harrod to the shooting.

One of their final witnesses was Annapolis Police Det. Aaron Stein, the lead detective for the case, who testified for more than a full day between Wednesday and Friday.

The high-profile trial has been complex, leading several other attorneys to visit the courtroom throughout the week. State’s Attorney Anne Colt Leitess has been present for most of the trial, occasionally advising Steinhardt and Grammas outside the courtroom.

Steinhardt and Grammas have sought to prove that Harrod and an unnamed accomplice had followed a Chevrolet Trailblazer occupied by Breonna Barnes and R.J. Atwell through Annapolis’ Clay Street area and opened fire once Barnes parked the vehicle on Pleasant Street.

Barnes testified that she was on a date with Atwell, whom she had recently started dating. When she parked on Pleasant Street that night, she stepped out of her car to take a call from her ex-boyfriend. Then, she heard someone call her name and begin to count down from five.

Barnes testified that she saw “two guys” behind her and saw one of them reach into his pants and grab something. As she got back into the car, she heard gunshots and glass breaking, and felt the SUV drop when a tire burst.

Neither Barnes nor Atwell was injured, but a bullet traveled to the patio and struck Cummings. Stein testified that the ex-boyfriend was found to be not related to the case.

Barnes testified that she did not know Harrod. Atwell did not testify and was seen on body-worn camera footage stating that he was “not a rat.”

Harrod, who escaped house arrest before the shooting, was arrested on open warrants the day of the shooting after police identified him as a suspect. He was charged with murder weeks later and is being held without bail in the Jennifer Road Detention Center.

Last week, prosecutors showed jurors surveillance footage of the hours preceding the shooting, identifying one shooter by a sweatshirt with a “distinctive design,” branded “KEY2S.U.C.C.E.S.S.” They said they believe Harrod wore that sweatshirt that night and found a similar sweatshirt and matching sweatpants at a Robinwood residence where he was staying. Those clothes contained Harrod’s DNA as well as gunshot residue — although a forensics expert could not confirm how or when the residue got there.

During cross-examination of another Annapolis Police officer, Cardin demonstrated that the branded sweatshirts were commonly available in the Annapolis area, presenting a similar sweatshirt as evidence. He said he planned to further show evidence related to the availability of the sweatshirt.

Prosecutors have tried to place Harrod at the scene through police officers who testified they were familiar with Harrod and identified him on video, as well as testimony from Hiedea Johnson, a Pleasant Street resident who reluctantly testified she gave Harrod his cellphone that night. She claimed she was pressured into making the statement.

This week, prosecutors showed calls and messages extracted from several cellphones associated with the case. A woman identified as Harrod’s girlfriend had repeatedly called and texted him that night, but received no response until shortly after midnight, when the man in the sweatshirt is seen on surveillance footage retrieving his cellphone from Johnson’s home.

The call log also showed that Harrod’s phone called a taxi company just before the shooting. A taxi driver, who identified his cab on surveillance footage, testified that he picked two men up from the Pleasant Street area that night, dropping one off on Monument Street and another in Robinwood.

Instagram records from Harrod’s account showed he and Johnson messaged each other following the shooting, at which time Harrod said “tell him be safe.” It was not made clear in court who “him” referred to. In another message at about 2 a.m. that morning, Harrod asked her if “they still out here,” leading the Pleasant Street resident to say “Yeah.” Prosecutors connected those messages to the crime scene on Pleasant Street, which Annapolis Police officers were still processing at that time.

Prosecutors also showed mail Harrod sent to acquaintances on July 23, 2021, while he was being held at the Jennifer Road Detention Center, that contained copies of his charging papers. In the documents, witnesses’ names were underlined. On recorded phone calls from the jail the same day, an acquaintance asked Harrod if he wanted him to “handle it.”

“Yeah,” Harrod said on the recorded call. “Find out who that is.”

Lawyers have meticulously avoided referencing Harrod being incarcerated in front of the jury, to avoid biasing jurors. The trial has stopped on several occasions to allow prosecutors to redact evidence that references his incarceration, including cutting sections of the jail calls where an automated voice mentions the detention center’s phone service. Harrod has appeared unshackled and in plain clothes, occasionally wearing a tie to court.

During cross-examination by Cardin, Stein confirmed there were two shooters involved that night, but no one else has been charged for Cummings’ death. Cardin also focused on Barnes’ ex-boyfriend’s involvement, questioning Stein on phone calls between her and her ex-boyfriend the night of the shooting. Cardin noted that the phone records shown to the jury were only a small sample of the phone records, most of which police deemed unrelated to their investigation.

Jurors were dismissed early on Friday after Stein’s testimony. Anne Arundel Circuit Judge Pamela K. Alban told jurors that the case, which is scheduled to last until Dec. 19, was “moving along very fast” and that they would likely be able to start deliberating on either Monday or Tuesday.

Cardin has estimated his case will take about a day to present. He indicated in court that he will focus on inconsistencies in the prosecution’s compilation of video footage, as well as the widespread availability of the sweatshirt.

The Baltimore attorney, who is the brother of U.S. Sen. Ben Cardin, urged jurors during opening statements to pay attention to what evidence isn’t presented by the prosecution. He highlighted that there were two guns involved in the shooting, a revelation that he said, “destroyed the initial theory of the shooting.”

“Well, who shot, who killed Ms. Cummings?” Cardin asked. “The state doesn’t know. The state will tell you they don’t know.”

Since before the trial, Cardin has expressed legal concerns over certain search warrants that granted investigators access to Harrod’s phone and the Robinwood address where they found the sweatshirt.

Without a clear link to Harrod in the hours that followed the shooting, police had first obtained a warrant to search Harrod’s phone for evidence of narcotics distribution, and then later obtained a warrant to search it in connection with the homicide, Cardin wrote in a legal filing. Those challenges were ultimately rejected, but Cardin has continued to highlight information about the process.

While cross-examining Stein, Cardin also focused on the 30 search warrants prepared for the case, some of which are still sealed, or haven’t been executed.

The trial will resume Monday at 9 a.m. There are currently 12 jurors and three alternates, who will be dismissed before deliberations begin if all jurors stay. One juror left earlier in the trial due to a medical emergency.