George Herring, scholar of US diplomacy and Vietnam War, dies at 86 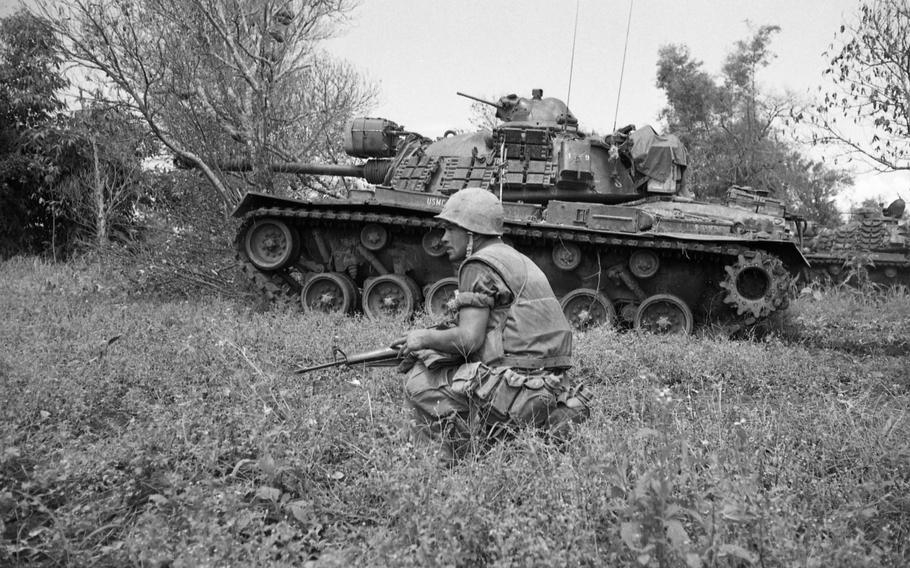 On May 16, 1967, Alpha Company of the 1st Battalion, 9th Marines, supported by tanks, moves out on a platoon-sized sweep in Vietnam. George C. Herring, a scholar of U.S. foreign relations who wrote a seminal history of the Vietnam War, crystallizing for generations of readers the reasons the United States entered the conflict and the lessons with which it was left, died Nov. 30 at his home in Lexington, K.Y. He was 86. (Tom Dreiling/Stars and Stripes)

George C. Herring, a scholar of U.S. foreign relations who wrote a seminal history of the Vietnam War, crystallizing for generations of readers the reasons the United States entered the conflict and the lessons with which it was left, died Nov. 30 at his home in Lexington, K.Y. He was 86.

The cause was lung cancer, said his wife, Dorothy “Dottie” Leathers.

Herring taught for 36 years at the University of Kentucky, where he chaired the history department, and became internationally known as a historian of American diplomacy. He devoted much of his scholarship to the Vietnam War, a period of history that he first encountered when it was not yet history at all.

He began teaching in 1965, the year President Lyndon B. Johnson sent the first U.S. combat forces ashore near Danang. “Vietnam was all over the campuses. It was in the classroom. It was outside of the classroom. It was what we talked about no matter what the topic of the day might be,” Herring recalled. “It was a time on college campuses quite unlike anything that, as far as I know, came before or has come since.”

His book “America’s Longest War: The United States and Vietnam, 1950-1975” was first published in 1979, with its sixth and most recent edition released in 2020. The volume has become a fixture of college reading lists and an established guide for understanding the war, which ended with the victory of communist North Vietnam, the loss of millions of Vietnamese lives and the deaths of nearly 60,000 American troops.

“’America’s Longest War’ remains a standard work, more than four decades after it appeared,” Fredrik Logevall, a professor of history and international affairs at Harvard University, said in an email. “Though it has been revised and expanded several times, at its core it remains what it always was: a nuanced, fair-minded, deeply insightful account of America’s misbegotten intervention in Indochina.”

“Generations of college students have received their introduction to the war through the book,” Logevall added. “Indeed, it’s a fair guess that it has taught more Americans about the war than any other book.”

Herring explored not only the military history of the conflict, but also the diplomatic, political and cultural forces that made it unwinnable — at least, as he said, “at a moral or material cost most Americans deemed acceptable.” Among other problems, the United States and its allies in South Vietnam had what he described as a “patron-client relationship.”

“The United States, the world’s strongest country and still riding high off its victory in World War II, was confident in its power — and its virtue,” he wrote in an essay published in the New York Times in 2017. “It expected to lead, and to be followed.

“In contrast,” he continued, “the South Vietnamese, citizens of a fragile state newly freed from colonial rule and threatened by internal insurgency and external invasion, recognized their desperate need for American help, but they were also acutely sensitive to dominance by an outside power. They struggled to uphold their dignity and autonomy.”

The result, Herring argued, was a dynamic unlikely to win over many “hearts and minds,” in the American parlance of the era.

In the years after the United States withdrew from Vietnam, Herring edited book-length versions of the Pentagon Papers, the secret government history of the war first published by newspapers including the New York Times and The Washington Post in 1971. He further explored the era in the volume “LBJ and Vietnam: A Different Kind of War” (1994).

Herring brought all his narrative and scholarly power to bear on “From Colony to Superpower: U.S. Foreign Relations Since 1776,” a 1,000-page tome, published in 2008 as part of the Oxford History of the United States, that led readers from George Washington’s admonition against foreign entanglements through George W. Bush’s 2003 invasion of Iraq.

“The strength of this book is the author’s Herculean power of synthesis,” Josef Joffe, a scholar of foreign policy, wrote in a Times review. Herring “recaptures a quarter-millennium of American foreign policy with fluidity and felicity. Wisely or warily, he avoids taking sides in the great controversies; a good teacher, he presents the ‘on the one hand’ along with the ‘on the other,’ copious references included.”

In the book — a finalist for a National Book Critics Circle Award — Herring dismissed popular notions of an American trend toward isolationism, chronicling U.S. involvement with foreign powers since before the republic was formed. By the end, he had a warning for American readers.

“They must cast away centuries-old notions of themselves as God’s chosen people,” he wrote. “In today’s world, such pretensions cannot fail to alienate others.”

George Cyril Herring Jr. was born May 23, 1936, in Blacksburg, Va., where his father coached wrestling at Virginia Tech. His mother was a teacher.

Herring received a bachelor’s degree in history from Roanoke College in 1957. He served in the Navy for two years before continuing his studies of history at the University of Virginia, receiving a master’s degree in 1962 and a doctorate in 1965.

He taught at Ohio University in Athens for four years before joining the University of Kentucky in 1969 and took emeritus status in 2005. He also taught at institutions including the U.S. Military Academy at West Point and served on a panel that advised the CIA on the declassification of government records.

In addition to his writings on Vietnam, Herring’s books included “Aid to Russia, 1941-1946: Strategy, Diplomacy, the Origins of the Cold War” (1973) and “The Central American Crisis: Sources of Conflict and the Failure of U.S. Policy” (1985), co-edited with Kenneth M. Coleman.

Herring’s marriage to Nancy Walton ended in divorce. He and Leathers married in 1995.

In addition to his wife, survivors include two children from his first marriage, John Herring and Lisa Harris, all of Lexington; and six grandchildren.

History, as Herring saw it, was something to be experienced as well as to be read. His family noted in a tribute that “he walked the battlefield at Dien Bien Phu in Vietnam, toured the Kremlin, and sat at the table at Yalta where FDR, Churchill and Stalin met in 1945.”

He understood, too, how quickly human memory fades. Within a decade of the fall of 1975 fall of Saigon, he reported, one of his students heard a reference to the incendiary chemical notoriously used as a weapon in Vietnam and “innocently asked what napalm was.”

“Vietnam continues to haunt Americans,” he wrote in the Los Angeles Times in 1997. “It is the war that never seems to go away, yet we still understand it poorly, if at all.”