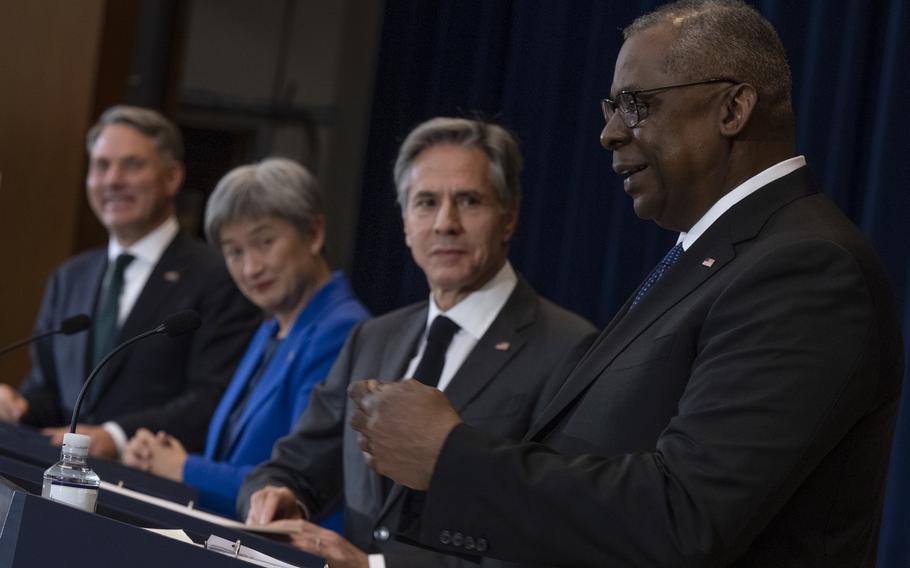 WASHINGTON — Defense Secretary Lloyd Austin said Tuesday that the U.S. military will increase its troop rotations in Australia to help bolster security in the Indo-Pacific amid growing Chinese influence in the region.

“We committed ourselves to deepen our cooperation in both diplomacy and defense,” Austin said. “The United States and Australia share a vision of [an Indo-Pacific] region where the countries can determine their own futures.”

Marles added: “We feel there is a very strong alignment between our two governments right now.”

The enhanced rotations are intended to provide more security for allies in the Indo-Pacific, which has emerged as an area of concern among Western countries in recent years because of expanding Chinese influence in the region. The Pentagon’s National Defense Strategy and China Military Power Report recently outlined various threats in the Indo-Pacific, particularly where China and Taiwan are involved.

Beijing considers Taiwan a breakaway territory and has said China would like to see a “reunification.” Russia’s invasion of Ukraine in February, which is based on a similar belief in Moscow, only caused more concern among Western leaders that China might someday try to take Taiwan by force.

During the news conference Tuesday, Austin also said Japan will be a key part of the deeper diplomatic and military cooperation with Australia.

“We agreed to enhance trilateral defense cooperation and to invite Japan to integrate into our force posture initiatives in Australia,” he said, underscoring Tokyo’s role in securing an open Indo-Pacific.

“There is an enormous sense of gratitude … in the way America is engaging in the Indo-Pacific,” Marles added. “It’s as good as we have seen in a very, very long time.”

Austin said bomber task forces will be part of the increased rotations to Australia. Full details on the rotations, though, will be given in the near future, he said.