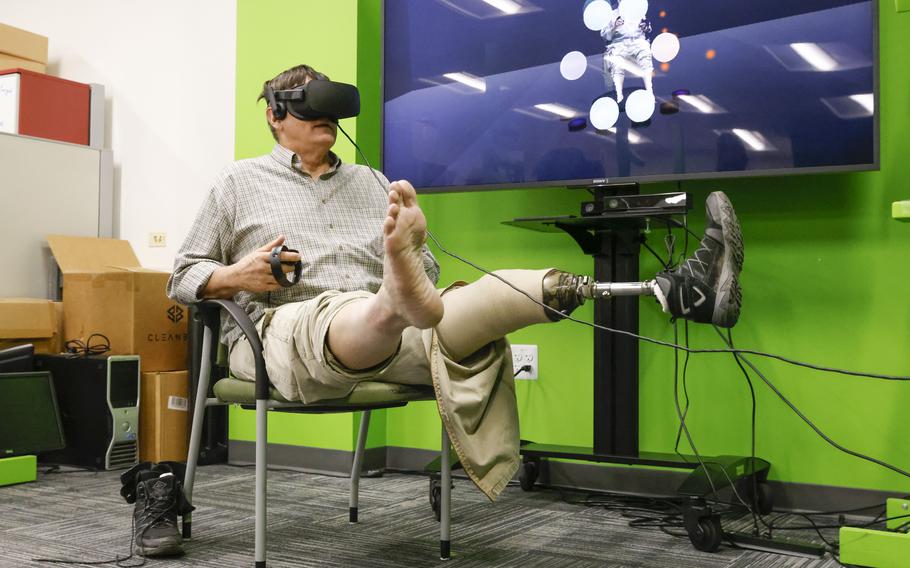 Navy veteran Frederick Dean Peterson, wearing a VR headset, lifts his legs as he demonstrate a new therapy called Mr. MAPP (Mixed reality system for Managing Phantom Pain) at University of Texas at Dallas in Richardson on Monday, Nov. 28, 2022. Peterson took part in the clinical trial of the therapy that helps the user by creating a virtual image of their missing limb. (Shafkat Anowar, The Dallas Morning News/TNS)

(Tribune News Service) — Every morning and night for one month, Dean Peterson donned virtual reality goggles to help him fall asleep. Once a heavy sleeper, he hadn’t slept well since he had his lower left leg amputated in 2005.

The carpenter and former Navy combat medic tossed and turned in bed, kept awake by pain where his lower leg was supposed to be. The sensation, known as phantom limb pain, was manageable with the distractions of the day, but the stillness of the night made it hard to ignore.

Sometimes, the brain sends signals to a missing limb, causing sensations like itching or cramping, but there’s no way for the amputee to relieve that feeling. University of Texas at Dallas researchers designed the software to help people with limb loss trick their brains into thinking the missing limb is still there and can be moved without discomfort.

When he looked at the VR screen, Peterson saw himself with both legs that he used to play games such as popping virtual bubbles with his feet or tapping colorful, moving circles.

After a few weeks of using the technology, called the Mixed Reality System for Managing Phantom Pain, or Mr. MAPP, Peterson noticed himself falling asleep faster. It worked so well that he didn’t want to give the technology back at the end of the study.

“I go to sleep easier now than I used to,” Peterson said. “I’ve already let them know that, when they’re ready for the next phase of testing, to sign me up.”

Mr. MAPP is a modern take on mirror therapy, a tool that’s been used for decades to help amputees visualize their missing limb and minimize the pain that occurs when the brain tries to send nerve signals to a part of the body that’s not there anymore. An estimated 80% of whom experience some form of phantom limb pain, according to the Cleveland Clinic. 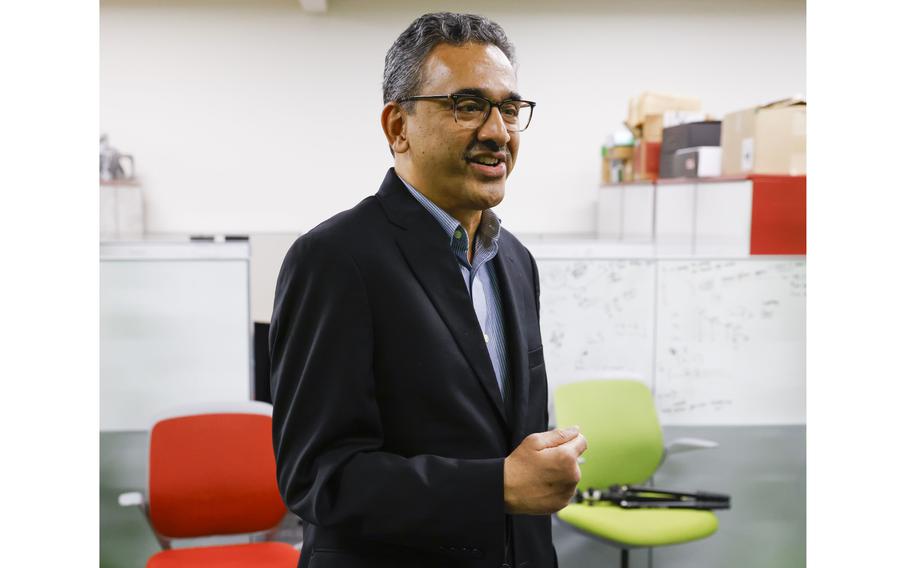 Dr. Balakrishnan Prabhakaran, assistant professor at UT-Dallas talks about a new therapy, called Mr. MAPP (Mixed reality system for Managing Phantom Pain) at University of Texas at Dallas in Richardson on Monday, Nov. 28, 2022. The therapy that helps the user by creating a virtual image of a their missing limb. (Shafkat Anowar, The Dallas Morning News/TNS)

Balakrishnan Prabhakaran and his team at UT Dallas are still tinkering with the device, but the computer science professor said Mr. MAPP has the potential to give amputees an even more realistic therapy option that could lessen the need for medical painkillers.

Prabhakaran partnered with the Veterans Affairs North Texas Health Care System to produce the therapy and conduct a pilot trial with 12 Dallas VA Medical Center patients. For four weeks, the patients used a laptop, camera and VR headset to generate a 3D model of their missing limb.

The software includes three exercises that require the leg to make different motions. Those exercises come in the form of games, and the software keeps track of the number of tasks successfully completed, like popping bubbles or pressing pedals.

One of the games plays a sound every time the patient hits a virtual colored circle on the floor.

“That’s part of the motivation with this one. You’re hitting a button on the ground and it makes a little tone, and that actually makes it kind of fun,” Peterson said.

Peterson and the other study participants gave extensive feedback to the UT Dallas team about what worked and what didn’t. He found that playing the game wearing shorts and with his shoe off was more effective because he saw “flesh and blood,” which made the games feel more real.

Mr. MAPP is easy to use, Peterson said, even though he’d never tried a VR system before. The biggest challenge was keeping his puppy away from the device when doing his exercises.

Researchers are still working out some bugs in the software and trying to make it as engaging as possible. Yu Yen Chung, a computer science Ph.D. candidate working on the project, redesigned the camera setup so that patients can see themselves in a first-person view, rather than having to look at themselves like they would in a mirror.

Being able to look down and see both legs may help the body better communicate with the brain, Chung said. The first-person perspective has not been rolled out to patients yet, although the team aims to start testing on it soon.

Despite the excitement surrounding the success of the technology, Peterson said he’s been wary about telling other amputees in the tight-knit limb loss community about his participation in the trial out of fear of getting their hopes up.

While there are other treatments for phantom limb pain, ranging from mirror therapy to prescription pain medications to spinal surgery, the results are mixed and can even be dangerous. Peterson previously tried mirror box therapy but found no relief.

For some people, the pain can be debilitating.

“This is something that’s very real, just as much as, let’s say, you hit your finger with a hammer and experienced that kind of pain. Phantom limb pain can be every bit as real as any of those pain sensations for specific individuals without the mechanism or opportunity to do anything about it,” said Jared Howell, director of the Center for Prosthetic and Orthotic Care at Baylor College of Medicine.

Highly addictive opioid medications sometimes prescribed to relieve phantom pain can come with a high cost. A February study of more than 2,000 lower limb amputees found that nearly 55% used opioids around the time of their surgery and nearly 45% were found to have prolonged opioid use.

“The opioid crisis is really a menace,” Prabhakaran said. “The problem with the way the medication works is that it rewires your brain. And, in this case, we are not rewiring our brain. We trick the brain, but we don’t rewire it in a way that’s harmful.”

One patient in the trial reported that, after using Mr. MAPP, he stopped taking medication for the pain. Whenever he felt the urge to take the medication, he would go and play the game, Prabhakaran said.

“It really made us feel very good because, in the opioid crisis, so many people get addicted,” Prabhakaran said. “If we can make a difference for that crisis, then we should.”

UT Dallas and Veterans Affairs secured a provisional patent for Mr. MAPP with hopes of finalizing the full patent trial in late winter or early spring of 2023. The team is already working to find a partner to license the technology and get it on the market as soon as next year.