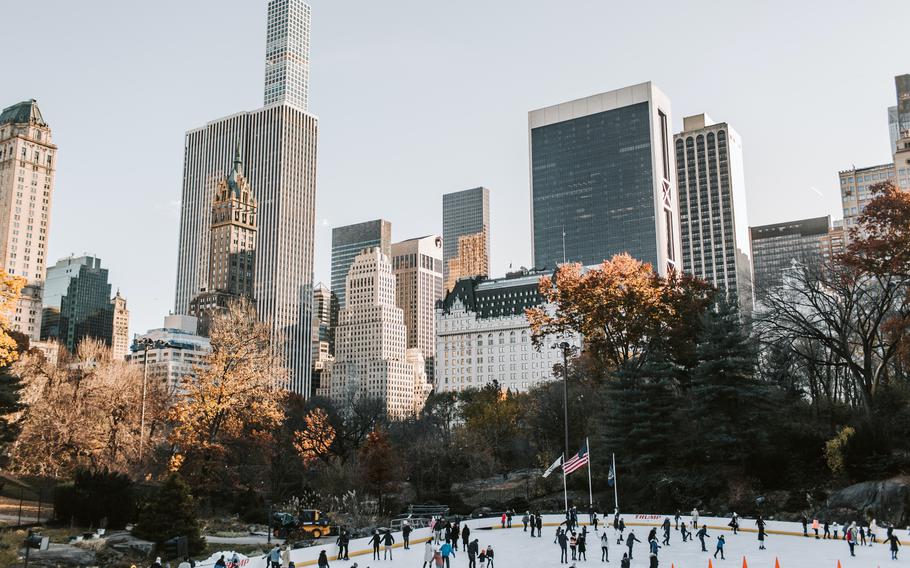 People ice skate at a park in New York City on Nov 23, 2018. A list of the most expensive cities in which to live, compiled semiannually by the London-based Economist Intelligence Unit as part of a Worldwide Cost of Living survey, saw drastic changes this year, in particular as an apparent result of ripple effects of the war in Ukraine. (Pexels)

A list of the most expensive cities in which to live, compiled semiannually by the London-based Economist Intelligence Unit as part of a Worldwide Cost of Living survey, saw drastic changes this year, in particular as an apparent result of ripple effects of the war in Ukraine.

Moscow and St. Petersburg, the most populous cities in Russia, saw the most drastic jumps in rank of any city included. Moscow went from the 72nd position last year to the 37th in 2022. Many cities in Western Europe, on the other hand, became less expensive, as currencies and economies weakend, even as gas and electricity prices spiked as a result of the war. Kyiv, Ukraine’s capital, was not on this year’s list.

The 2022 edition compares cost of living in 172 cities, analyzing the prices of more than 200 goods and services, including rent, utility bills, household goods and groceries. The survey documented an 8.1 percent rise in inflation globally over the past year: the highest recorded since EIU began tracking nearly two decades ago.

Economists have attributed the global cost of living crisis in part to the war in Ukraine, along with ongoing Covid-19 restrictions in China, other effects of the pandemic, supply-chain problems, climate change and the compounding impact of inflation itself.

Upasana Dutt, who led the cost of living survey this year and last, said that the war in Ukraine is one of two key factors, alongside the pandemic.

“What we are noticing is an obstruction in the supply chain and that has only happened because of the war,” she said. “If there was no war, then this kind of upheaval would have obviously not been seen. It would be far more limited.”

As pandemic restrictions eased, a rising demand for goods met with continued blockages in the supply chain, Dutt said, leading to high inflation levels. Western sanctions imposed on Russia “compounded the impact on the supply of goods everywhere.”

The report documents this impact in other European cities, where attempts to decrease dependence on Russian energy led to a 29 percent increase in prices for gas and electricity in some regions, compared to a global average increase of 11 percent.

Worldwide, utility bills are up by an average of 11 percent, and car prices have risen by 9.5 percent on average in local-currency terms, according to the EIU. The staunchest price increase noted by the report is for a liter of oil, which has risen by 22 percent on average.

The European cities of Luxembourg, Stockholm, Brussels, Lyon, France; and Manchester, England; made up five of the 10 cities that fell the most in the rankings this year — a result of economies weakend by the energy crisis.

While Istanbul, Buenos Aires, and Tehran have experienced high increases in inflation, the highest inflation rate recorded was in Caracas, Venezuela, where cost of living prices have risen by 132 percent in the past year.

The report anticipates some relief in 2023, if commodity prices “fall sharply,” so long as the war in Ukraine does not escalate.